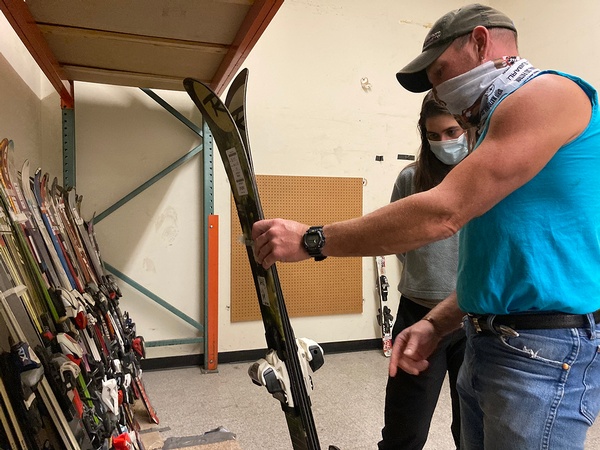 Hesperus Ski Patrol Director Trent Meshew discusses a pair of skis with a potential buyer Monday at the swap. Instead of just going for a weekend, the swap is being spread out over a month this year. You have until Nov. 14 to score a deal on some used (and new) gear and until Nov. 13 to sell your stuff./ Photo by Missy Votel

As of now, there’s at least one thing you can count on not getting cancelled because of COVID: winter. (Of course, whether or not Old Man Winter keeps up his end of the bargain remains to be seen.) Another thing you can count on: the Hesperus Ski Patrol Ski Swap, which is taking place through Nov. 14 downtown in the strip mall at 1365 Camino del Rio (next to Pizza Hut and Auto Zone).

Yes, COVID has put a wrench in the format of ski swaps of years past – 56 to be exact. But like the hardy men and women they are, Hesperus ski patrollers weren’t about to give up on No. 57. The annual swap, traditionally held the weekend after Halloween at the La Plata County Fairgrounds, is the all-volunteer patrol’s main money maker for the year. Funds go to pay for things like emergency outdoor medical training and supplies.

“Our annual budget is $20,000-$25,000 a year,” Patrol director Trent Meshew said Monday. “What we hope to do with the swap is generate at least that much plus a little bit extra, to have in the savings.”

“Even if we were outdoors, it was going to be limited to 175 people at a time,” said Meshew. “It just became a logistical nightmare. We got to a point where we decided it wasn’t worth it because we weren’t going to make any money.”

That’s when Bill came up with the idea to rent a space and spread the sale out over a month. That way, they could generate attendance numbers without trying to cram it all into one day, as is usually done. The sale, which officially started Oct. 19, features Ski Barn’s new merchandise up front and the swap’s (mostly) used gear in the back (sort of a ski sale mullet, if you will.)

Meshew said the swap features more than 500 used items, including everything from alpine and skinny skis to cross country boots and a few lonely pairs of tele boots (cheap to a good home.) Unlike in years past, there will be no entrance fee to the swap, although it’s $1 per item to sell, with the Patrol taking a 20 percent cut of the sale price. In addition, folks can drop off used gear to sell up until the second-to-last day, Nov. 13 (to expedite the drop-off, fill out the form at www.hesperusskipatrol.org ahead of time.) Masks are required and social distancing will be practiced, although Meshew said the crush of buyers hasn’t been a problem. Yet.

Why should you go, you may be asking? Well, for starters, there’s no better place to be during a pandemic than noodling around the woods on a pair of skis. Secondly, used gear is hot – and what better way to test the flex, clomp around in the boots and make sure those pants don’t make your butt look big before you buy?

But most importantly, it’s to help support those badass dudes and dudettes who brave the dark scrub oak to make sure your night skiing experience is safe. With about 30 members, the Hesperus Ski Patrol is part of the vaunted 82-year-old National Ski Patrol, a volunteer organization. Although numerous on the East Coast, Hesperus is the last all-volunteer NSP crew in the Rocky Mountains. Which is pretty cool when you think about it.

Not only that, but the Hesperus patrol is among the oldest, too. Fun fact: Hesperus ski area (b. 1962) is actually older than Purgatory (b. 1965), which recently bought the small mom-and-pop operation. Meshew said now that Hesperus is free to Purg season pass holders, there has been a big uptick in skiers.

Of course, more skiers means everything from more bumps, bruises and lost skis to more severe mishaps involving the dreaded toboggan ride. (Which it turns out, from personal experience, is really not nearly as bad as you think it’s going to be.)

Over the years, numbers on the patrol have waxed and waned. Last season was among the patrol’s best, with a solid three patrollers on staff on any given night. However, he did note there has been some attrition to the Purgatory Ski Patrol as of late, and Hesperus is always looking for a few more good men and women (you can also get more info on this at www.hesperusskipatrol.org.)

According to Meshew, who started patrolling when his kids were little as a way to get free skiing for the family, it’s the best (non-paying) job you’ll ever love. But then again, if it was about the money, most of us wouldn’t be here in the first place, would we?

“I’ve always wanted to be a ski patroller. It’s a fascinating position,” he said. “That’s the reason why we all volunteer. We love it. We love patrolling.” 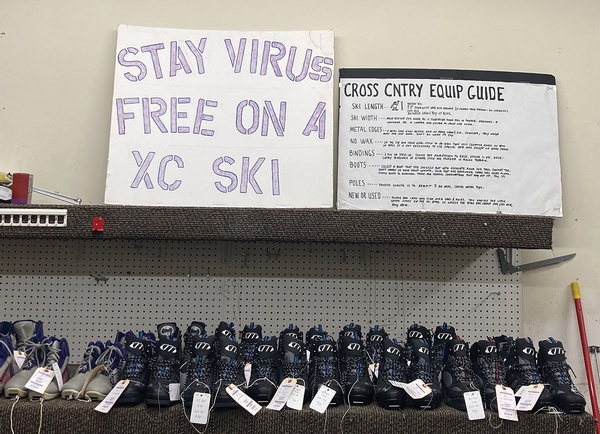 A homemade sign touting one of the myriad benefits of cross country skiing.