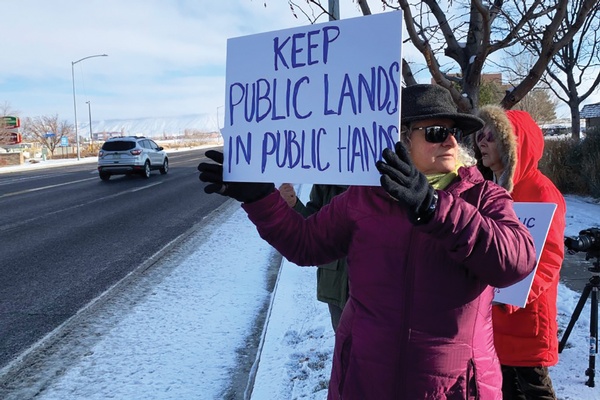 When the BLM moved into Grand Junction, protesters were there to un-welcome them to the neighborhood. Anne Landman came to protest the agency's move because she thinks it's President Donald Trump's way of "tearing it apart."/Courtesy photo, CPR News

As the Bureau of Land Management opened in its new national headquarters in Grand Junction on Jan. 2, about two dozen protesters were there to greet it.

Bundled up against the cold and waving homemade signs, the mostly older crowd seemed to agree on two things: It was very nice of the BLM to hand out free donuts to them – and they don’t trust the agency’s move out here one bit.

Eileen Roberts held up a sign with the words, “Kiss Your Public Lands Goodbye.” The 67-year-old believes this is an attempt to weaken the agency.

“I think they just want to get the decision-makers out of Washington, D.C., so they don’t have an ability to influence Congress,” Roberts said. “I think that’s the reason they moved them.”

While the push to move the BLM out West started as a bipartisan effort back when Barack Obama was in office, it became increasingly political, with many Democrats and public land advocates seeing it a way to carry out the Trump administration’s promise to energy production.

But that’s “not the case at all,” insisted BLM spokeswoman Megan Crandall.

This move is about getting the headquarters “close to the lands we manage and close to people, like the protesters, who are incredibly passionate about those lands,” Crandall said.

The BLM has a diverse mission, overseeing nearly 250 million acres of public land for recreation, conservation and energy production. Crandall calls it a “balancing act,” for which voices from across different communities and industries are vital.

“For there to be protesters here, I think that’s great. That’s part of being the BLM,” she said. “And so we have folks here today that are on one side. Tomorrow, we might have folks who are on another side, and that’s important.”

But outside the bright new office, the protesters worried their voices will carry little weight compared to oil and gas special interests. Demonstration organizer Cody Perry, who runs a conservation media company, brought up the oft-mentioned fact that the BLM’s acting director William Perry Pendley used to advocate for selling off public lands.

While Pendley has been vocal about having since changed his stance on the selling of public lands, protesters like Jeff Cook still don’t trust his motives. Cook called the headquarters move, part of a large-scale restructuring of the agency, “fishy.”

“And that’s why I’m here today, to stand up and protest,” he said. “And I’ll be here to protest again and again.”

Cook added that he hasn’t thought once about the 40 or so jobs and the name recognition the BLM will bring to Grand Junction. Those mean nothing to him compared to the fear he has for the land under the agency’s control.

To read this story and more from Colorado Public Radio News, go to www.cpr.org.