The voting block
Protests have mobilized a new generation, but voting isn't where they see their power 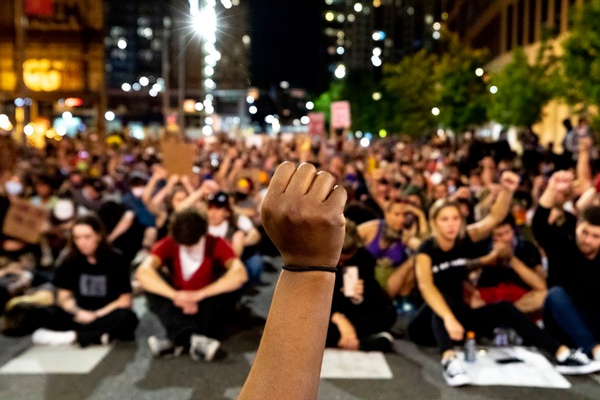 Khyra Parker raises her fist June 2 in Denver during nine minutes of silence at a protest in reaction to the police killing of George Floyd./Photo Kevin J. Beaty/Denverite

Protesters in Colorado calling for justice and police defunding over the killing of George Floyd has mobilized a new generation of young people politically. But questions remain about whether that momentum will translate into votes in November, especially because some demonstrators say they don’t have faith in the political system.

“I’m not really hopeful on politicians because they’re going to do what they want to do at the end of the day,” demonstrator Klou Johnson said recently outside the state Capitol. “The last thing that ever went in our favor was in the Civil Rights Movement and that still isn’t working. We’re still getting shot.”

Even though it’s hard to believe in politics, she said she hasn’t given up on them entirely.

“My people died for us to vote for a reason, so I do vote,” Johnson said.

Jade I AM stood at the Capitol steps as a brass band played during protests. She said the political system is too slow-moving and her energy is better used working with organizations that uplift Black people.

“Politics is a lot of other people having control and us trying to hope things go in our direction,” she said. “If we start our own organization, we can direct how we want to move with the intention we want to have.” While voters like I AM acknowledged that voting is important, without protests, it doesn’t have much power. And it isn’t the only thing people should do to make change, Hahrie Han, a political scientist at Johns Hopkins University, said.

“It's voting and changing the system to make it work for people alongside expressing our discontent for that system,” Han said.

“So even people who aren't necessarily in the streets protesting might develop sympathy with the cause,” Han said.

In order for protests to be effective, they need to be backed by strong organization and leaders who work with protesters and “negotiate on their behalf with decision-makers in positions of power,” Han said.

This happened in Minneapolis, where the city is moving to dismantle the police department. The action didn’t happen exclusively because of George Floyd protests, Han said. It took years of demonstrations that ramped up after Michael Brown’s death in Ferguson and because strong leaders worked with elected officials.

Even though young people have seen a fractured federal government for the last four years, Peter C. Groff, former Democratic president of the Colorado Senate, said he still wants them to vote.

People can protest every single day, but “if elected officials don’t move on the demands that you’re protesting, nothing will be done and you’ll have to continue to protest,” Groff said. “There is no question that elected officials are looking at this and saying, ‘The voters are going to hold us to a different standard come November.’”

Politicians like Democratic presidential nominee Joe Biden still have time to use this momentum and win voters, Groff said. But he warned young voters, in particular, to be practical and understand there is no perfect candidate.

“It’s one of those growing moments for the young electorate to understand that you have to vote on your issues,” he said.

But back in the crowd of Denver demonstrators, people like Shawn Bosley cautioned compromising on a candidate. He said someone running must speak specifically to Black issues in order to earn Black votes, including his own, and what he’s heard so far – both locally and nationally – hasn’t felt genuine.

“We will give you our vote but we want to make sure that our communities and our people and our problems are being represented in the official that we elect,” he said.