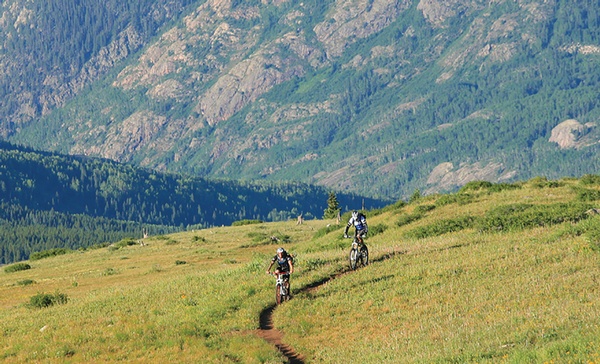 Mountain bikers make their way along a trail in the San Juan Mountains. Under a new decree from the De- partment of the Interior, all classes of e-bikes will be allowed on nonmotorized trails previously only open to bicycles. The rule applies to BLM and national parks lands. The Forest Service said it has no plans to reclassify e-bikes as nonmotorized./File photo

E-bikes could be coming to singletrack near you soon. Last Thurs., Aug. 29, newly appointed Secretary of the Interior David Bernhardt dropped the big one (at least as far as recreational users of public lands are concerned): Order No. 3376.

Despite the unassuming name, the decree ordered all trails on Department of Interior public lands – including those managed by the BLM – that are open to bicycles also be open to e-bikes. A similar memorandum applying to National Parks Service trails was issued the following day.

“This Order is meant to increase recreational opportunities for all Americans, especially those with physical limitations, and to encourage the enjoyment of all lands and waters managed by the Department of the Interior,” the order stated. “Reducing the physical demand to operate a bicycle has expanded access to recreational opportunities, particularly to those with limitations stemming from age, illness, disability or fitness, especially in more challenging environments, such as high altitudes.”

The new policy requires public land managers to adopt rules allowing e-bikes on nonmotorized trails and exempt them from motorized vehicle status within 14 days (Sept. 13). It also directs land managers to devise public guidelines for e-bike use within 30 days.

The National Park Service has praised e-bikes as a more environmentally friendly form of transportation to get visitors to more remote areas while alleviating congestion. “They provide an option for people who want to ride a bicycle but might not otherwise do so because of physical fitness, age, disability or convenience, especially at high altitudes or in hilly or strenuous terrain,” NPS Deputy Director P. Daniel Smith said.

However, trail advocates and conservationists are saying not so fast. “We believe reclassifying battery-powered bikes as nonmotorized not only is illogical, it will displace mountain bikes without motors,” Mark Larabee, of The Pacific Crest Trail Association, said. “More importantly, it would be a paradigm shift in otherwise sound government policy.”

The International Mountain Bicycling Association, or IMBA, which has come out in support of Class 1 e-bikes on trails, also urges caution in rolling full-steam ahead. “It is critical the secretarial order ... does not bind land managers to managing all classes of eMTBs as traditional mountain bikes. Land managers must be able to recognize eMTBs as three distinct classes and manage eMTBs separately from traditional mountain bikes,” read a statement on the IMBA website.

The Durango-based Wilderness Society, along with several other conservation groups, sent a letter penned by Wilderness Society Director Michael Carroll this summer asking federal land managers to put the brakes on e-bikes until a proper public process took place.

That never happened. Instead, land managers have 14 days to implement the rule and 30 days to craft guidelines for e-bikes. The order also directs them to submit a timeline to seek public comment on changing the rule within 30 days. According to Carroll, this basically goes against protocol, seeking comment after the fact. “If people want to see e-bikes on nonmotorized trails, there’s a process for that,” he said.

He also worries a decision to allow e-bikes on Forest Service nonmotorized areas could be forthcoming. However, Jed Botsford, recreation supervisor for the Columbine Ranger District, said he knows of no plans to do so.

“There are no changes on the Forest Service side,” he said. “E-bikes are considered vehicles by the U.S. Forest Service and only allowed on trails and roads open to motorized use.”

In addition, the Forest Service falls under different jurisdiction than the BLM. It is overseen by the U.S. Department of Agriculture, and not the DOI.

Locally, the new rule would affect Phil’s World, Animas Mountain and parts of Horse Gulch and Overend Mountain Park, to name a few. Carroll notes that local land managers, such as the City of Durango, which have trails across a patchwork of private, city, state and federal lands, may be forced to follow the feds lead. “We’ve got a lot of trails that are on BLM land and dead-end into city parks and rec trails,” he said. “If we’re going to have a consistent formula, the city may be obliged to follow the federal rules.”

Currently, state law allows Class 1 and 2 e-bikes on any trail that bikes are allowed on. But, it also leaves the door open for local governments to make their own decisions.

E-bikes of any kind are not allowed on City of Durango natural-surface trails although Class 1 and 2 e-bikes are allowed on the Animas River Trail. Durango Parks and Recreation Director Cathy Metz told the Telegraph in an Aug. 15 story there’s no plan to change that, although some residents have raised the idea of allowing Class I e-bikes on natural-surface trails. “But, there hasn’t been an outpouring,” she added.

However, she noted if federal land agencies change direction and allow e-bikes, the city would likely revisit the issue. “We are monitoring what federal land managers are doing. We’re also monitoring what’s happening in other parts of Colorado and the nation,” she said.

For Carroll and others in the conservation community, it’s just part and parcel for the current administration.

“The Trump Administration has a long-standing track record of management for and by industry and, from our understanding, working behind closed doors,” he said.

He noted that the e-bike advocacy group People for Bikes recently merged with the Bicycle Products Supplier Association, which in addition to traditional mountain bike companies also includes motor manufacturers such as Harley Davidson, Yamaha and Bosch.

“What does this say to the thousands of volunteers who have played by the rules?” Darrell Wallace, Chairman of the Back Country Horsemen of America, asked. “That the manufacturers of these motorized machines are more important than the citizens who use and maintain these trails?”

Curiously enough, as the United States was opening its nonmotorized trails to e-bikes, Canada was shutting theirs down. British Columbia Parks announced Aug. 28 that Class 2 and 3 e-bikes would no longer be allowed on nonmotorized trails in order protect the land. It was a move that the region’s mountain bike advocacy group agreed with.

"We need to make sure that the trails stay within their own carrying capacity and our environment stays within its carrying capacity," North Shore Mountain Bike Association president Cooper Quinn told the CBC.

However, Carroll is not sure the proverbial genie can be put back in the bottle in the States. “Will e-motorcycles, e-quads, e-snowmobiles, e-scooters all be allowed under this? All of those exist,” he said.

Perhaps most importantly, Carroll and others noted they are in no way against e-bikes as a whole. They serve a purpose in everything from commuting to shuttling kids and groceries. Rather, opponents of the rule have a problem with the lack of a transparency and the refusal to accept e-bikes for what they really are: motorized vehicles.

“No one in the conservation community has anything against e-bikes, we want to see more e-bikes,” Carroll said. “We just want an open process, and we want e-bikes in the right places.”