To the moon and back
Thanks to work of local student, astronaut Stuart Roosa's 'moon trees' land in Durango 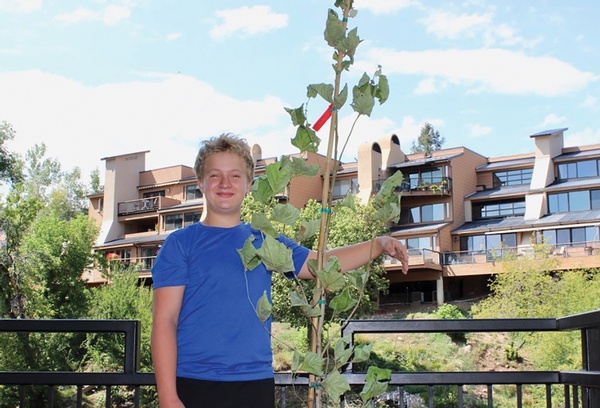 Eighth-grader Alex Gnehm, with one of the second generation "moon trees" to be planted in Durango at the Powerhouse Science Center. A school project on local place names led Alex to Durango astronaut Stuart Roosa. A smokejumper before he became an astronaut, Roosa brought tree seeds with him on his Apollo 14 mission at the request of the Forest Service. Now, descendants of some of those seeds, which went on to become trees, are coming to Durango./ Photo by Kathleen O'Connor

It began with an idea for a school project and some youthful curiosity.

In the fall of 2019, then-seventh-grader Alex Gnehm and his school instructor Chris Hughes thought it would be interesting to find out the reasons for the unique monikers of some of the public parks around Durango. After investigating the origin of several park names, including Fassbinder – named after Peter Fassbinder, the pioneer who made his fortune in the late 1800s by buying up land around Durango and selling the spring water on his property – Alex got to Roosa Park. It was then that he discovered both Roosa Park and Roosa Avenue, located west of downtown near the 9th Street Bridge, got their names from Durango-born astronaut and Apollo 14 command module pilot, Stuart Roosa.

Along with his fellow astronauts, Alan Shepard, the first American in space, and Edgar Mitchell, Roosa executed NASA’s eighth crewed mission and third mission to land on the moon. For Alex, this discovery led to much excitement. “I thought it was really cool that a person from Durango became an astronaut,” he said.

Further research into Roosa’s life led Alex to discover what are known as the “moon trees.” Long before Roosa’s Apollo 14 mission on Jan. 31, 1971, he was a smokejumper for the U.S. Forest Service. Drawn to the work by his love of nature and adventure, Roosa fought several fires in California and Oregon during his time with the Forest Service in 1953. Because of Roosa’s history with the organization, the Forest Service asked Roosa if he wouldn’t mind taking some tree seeds with him into space during his Apollo mission. The idea: to study the effects of space travel on seed germination and subsequent growth. Botanists wondered if the seeds would sprout and grow normally after being in microgravity conditions with high-energy radiation exposure.

Approximately 500 tree seeds, representing five different species, traveled with Roosa in the Kitty Hawk orbiter in a compact tin canister. They circumnavigated the moon 34 times before making their journey back to Earth. Of the 500 space-traveling seeds, around 450 were later grown to sapling size. Most of the saplings were given away in 1975 to various state capitols, schools, museums and space centers for planting during the U.S. bicentennial in 1976. Some made it as far as Brazil, and one was even gifted to the Emperor of Japan. Today, one grows in front of NASA’s Goddard Space Flight Center in Greenbelt, Md., and another at4

Then, they were mostly forgotten. Of the approximately 450 surviving saplings, the whereabouts of only around 80 of them are currently known.

When Alex stumbled upon the moon trees’ existence and their connection to Stuart Roosa, he remembers thinking, “why isn’t there a moon tree here in Durango?” Hughes agreed. Both he and Alex, diving deeper into the moon tree phenomenon, followed the trail that led them into contact with the Forest Service, NASA and eventually to Roosa’s daughter, Rosemary, living in Biloxi, Miss. Through Rosemary, they learned about The Moon Tree Foundation, a nonprofit organization created in honor of her father and his love of space, the natural world and conservation. The foundation continues the legacy of Roosa and the moon trees through its mission to “educate the world’s society about an important part of our history, the United States Space Program, the United States Forest Service, and to inspire the globe’s population with the living legacy of the moon trees.”

Ms. Roosa performs the work of the foundation through the distribution of second-generation moon trees, which she hopes will serve as ambassadors across the world, emphasizing the importance of unity, education and conservation. “We are diverse, but we are all on the same planet that needs our care,” she said during a phone conversation.

The idea to bring some of these second-generation moon trees to Durango was a no-brainer for Alex and Chris, who immediately saw the potential learning opportunities for children of all ages. Hughes’ educational vision includes utilizing the moon trees as a means to galvanize students’ curiosity.

“From an educator’s perspective, there are so many different angles from which this can be approached, whether it’s learning more about space travel and cosmology, the Apollo program specifically, botany and silviculture, conservation, forestry or any other angle a student can come up with related to the moon trees,” he said.

As a former board member at The Powerhouse Science Center, Hughes thought the local nonprofit would make the perfect partner for collaboration on bringing the moon trees and Roosa’s legacy to Durango. Upon hearing about the moon trees, Powerhouse Interim Executive Director Jeff Susor was immediately on board. “The anniversary of Commander Roosa’s mission corresponds with such an amazing moment in our country’s space program,” he said. Not only does it coincide with the return crewed space flight in May but the mission of the Perseverance Rover that is en route to Mars right now as well as the expected launch of the James Webb Space Telescope next year.

“The local moon tree connection was a great chance to bring local relevance and hopefully inspire our neighbors to join us in dreaming of the stars,” Susor said.

An American sycamore will be the first moon tree (or “half-moon tree,” as these second-generation trees are affectionately called) planted in Durango. The event will be on the Powerhouse grounds at 11 a.m., Sat., Sept. 12.  This event will launch (pun intended) a monthly virtual, space-themed lecture series hosted by the Science Center in celebration of the 50th anniversary of the Apollo 14 Moon mission. For the next nine months, The Powerhouse will host online speakers from all areas of aeronautical expertise and experience. The lecture series begins at 4:30 p.m. Sun., Sept. 13, with speaker Rosemary Roosa. The Powerhouse is offering all recorded lectures as a resource for teachers who wish to utilize them in their classrooms. “We want to introduce students to astronauts, engineers, astronomers and people who can share personal stories from the golden age of space flight, even if they don’t have a chance to visit The Powerhouse this school year,” Susor said.

A second half-moon tree is scheduled for planting in memory of Stuart Roosa on Earth Day 2021 in Roosa Park. This event will be hosted by Chris and Alex and will be attended by Rosemary Roosa, who remembers clearly the day her father blasted off into space. “Witnessing the Saturn V launch was a feast for the senses,” Roosa, who was 7 at the time, recalled.  “We were 2 miles away from a rocket taller than the Statue of Liberty. I remember seeing the flames and the ground shake as if there was an earthquake. It was very exciting knowing my dad was in there.”

The community is invited to view The Powerhouse’s Sept. 12 planting event through the science center’s Facebook page or attend the event “live” in the Carver Brewing Plaza. n 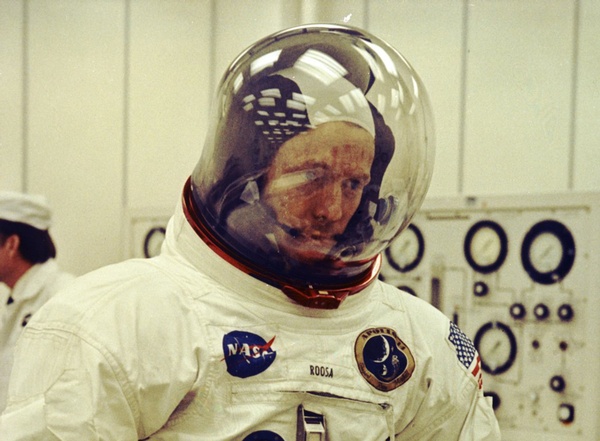