Train gets onboard with non-coal engines
New diesel, oil engines will be used during times of high fire risk 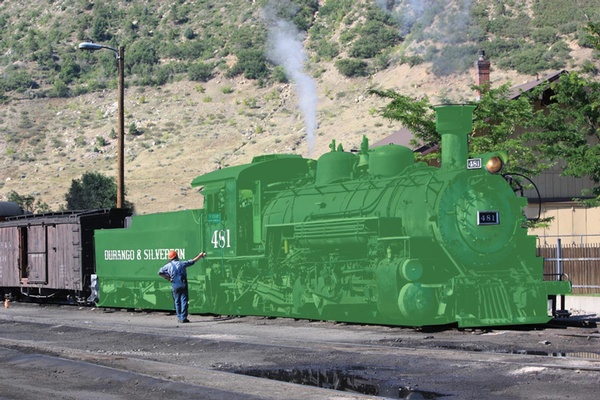 Some D&SNGRR engines will have a new look in 2019, with plans to introduce one oil and two diesel locomotives. The diesels will be painted green, which might look something like this, but we won't know until the train releases details in coming weeks. Unlike the train's existing diesels, these will be able to make it to Silverton.

The green train is about to roll into the station. Literally.

Durango and Silverton Narrow Gauge Railroad owner Al Harper said this week that the train is buying two new (new to them anyway) diesel locomotives. It is also working on retrofitting an existing engine to run on oil. The new engines will run during times of high fire risk. The train will continue to run its coal-powered trains at other times.

The diesel locomotives, which are being built in South Carolina, should be finished in time for next year’s busy summer season. And since the diesel-powered engines will be a departure from the train’s historic steam locomotives, so will their appearance. They will be painted green (other exterior details will be forthcoming, he said.)

“I call it ecological green, like the forest,” said Harper on Tuesday. “It’s kind of fitting.” For those who have spent the summer on Mars, the D&SNGRR may or may not have started the 416 Fire on June 1. Although eye-witnesses said the fire started from train cinders, its cause is still classified as “under

investigation” by the U.S. Forest Service. But in the meantime, Harper said he does not want to take any more chances with the local economy or environment. He said the train lost $6 million in revenue when it was shut down for several weeks this summer, and 224 of his employees were out of work. This is in addition to the economic repercussions felt far and wide throughout the Durango and Silverton communities.

“We want to be good neighbors,” said Harper. “Next year, the train is going to be 137 years old, and there’s never been scheduled service without coal. It’s a big change, but we are adapting with the times.”

In addition to the two diesel locomotives, the train is also retrofitting an existing engine to burn oil, much like heating oil used back East, instead of coal. The exciting thing about these engines, other than the fact they will sharply reduce fire danger, they will all be able to make the trip to Silverton. (The train’s existing diesels are not able to make the sharp grade past Hermosa.) The two 2,000-horsepower diesels will be able to tow eight cars each; the oil train, 12 cars.

Since nobody builds new diesel locomotives, the two new D&SNG engines – which Harper plans to, fittingly, name the 416 and 550 – are being built from existing 8-foot engine platforms. The oil locomotive is being built on-site by train mechanics and will be ready by May 1, 2019, he said.

“It’s going to be a big help, no question,” said Harper. The plans is to run the trains during times of high fire risk, such as earlier this summer. “They can work so we don’t ever get shut down again.”

The three new trains plus a new 3,000-square-foot building to house and maintain them, is expected to cost $6 million.

Harper said it has been bittersweet, parting with the long tradition of coal-powered steam trains, but that he is excited about the new direction as well. (He plans to nick-name the new diesels “Rail Ranger” and “Forest Ranger.”)

“The world is changing, it’s what we need to do,” he said. “My father always told me to have a higher sense of right. We’ve got to go this way.”