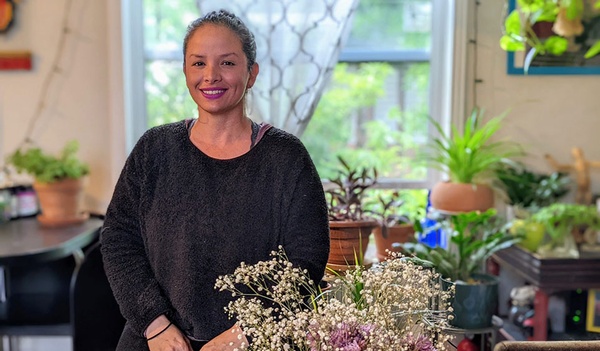 Angela Maria Ortiz Roa in her home at the Mapleton Mobile Home Park in Boulder in May. While she tries to keep her thermostat low in the winter, she said her bills often top $100 a month due to drafts and a lack of insulation./CPR photo

The community offers a rare option for affordable homeownership in the heart of the city. After moving in months before the start of the COVID-19 pandemic, Ortiz Roa now has space for bongos and keyboards she plays with her son. A dog named Poma has joined the family. A corner in the living room is packed with house plants, which she fertilizes with compost from a bin in her kitchen.

Ortiz Roa, who works in communications and climate justice for the City of Boulder, said energy prices are one of the few downsides of her unit. While she tries to keep her thermostat low in the winter, she said her bills often top $100 a month due to drafts and a lack of insulation. Those costs climbed higher this year amid rising energy prices.

“When you walk in bare feet in the winter, you can feel gaps in the lining where the floor gets cold,” Ortiz Roa said.

Many owners of manufactured homes face similar struggles. Data from the U.S. Energy Information Administration shows mobile homes use about 35% more energy per square foot than single-family homes. A Colorado study shows the additional energy costs mean mobile home residents – who tend to be lower or middle-income – see a higher proportion of their paychecks go to energy bills.

Last month, the federal government took a long-awaited step to help address the issue. Following a lawsuit from the Sierra Club, the U.S. Department of Energy adopted new energy efficiency rules designed to protect manufactured homebuyers from unnecessary energy costs, marking the first update of the rules in more than 25 years. The agency claims the requirements will slash greenhouse gas emissions and help future manufactured home residents save hundreds of dollars a year on utility bills.

But the move has fueled a debate about affordability amid rising energy prices and a nationwide housing crisis. Manufactured homebuilders warn that tougher rules could increase the cost of homes.

Since manufactured homes often cross state lines on truck beds, the federal government has been the primary authority overseeing their construction standards for decades. The U.S. Department of Housing and Urban Development last set energy efficiency standards in 1994. Congress passed a 2007 law calling on the Department of Energy for an update, but bureaucratic hangups left the issue unsettled until this year.

“We are recognizing the upfront purchase price is important as well, so we wanted to strike a balance,” Granholm said during a recent visit to the National Renewable Energy Laboratory in Colorado.

However, the final standards disappointed energy efficiency advocates. Lowell Ungar, the director of federal policy for the American Council for an Energy Economy, said the 2022 update is an improvement, but he thinks the government could have gone further without significantly increasing home prices.

“We think that the Biden administration missed an opportunity here,” Ungar said. “They’ve barely changed the standards for smaller homes, and we fear that the residents of those homes are going to be paying high energy bills for decades to come.”

The new rules also have drawn fire from the manufactured housing industry, which argues they will increase housing costs.

U.S. Rep. David Kustoff, R-Tennessee, has submitted a bill in Congress to give HUD the final review based on an assessment of increased home prices.