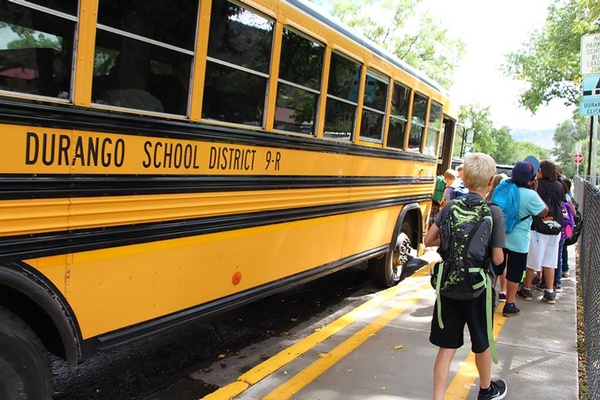 A new bill seeks to correct the imbalance between poorer and richer districts by changing the 25-year-old funding formula. Currently, many affluent districts receive cost of living increases in student funding, further adding to the gap. Durango receives slightly less than the state average of $8,480 per pupil./Courtesy photo

The state school finance committee met Monday to discuss a draft bill that aims to reduce inequities in school funding across Colorado.

The state currently uses a 25-year-old formula to calculate how much money to give to its 178 districts, based in part on size, cost of living and number of at-risk students.

Critics of the existing formula say it leaves schools, especially those with low-income students, without the resources they need. Currently, more than $1 billion – about 15 percent of the formula – goes to the a cost-of-living factor. However, because wealthy communities often have a high cost of living, this sends more money to affluent districts, which in some cases pay a smaller share of school costs than do poorer districts.

To address inequity, the bill would:

• Decrease emphasis on district size and instead factor additional funding for small or sparely populated areas. Funding based on size would only be calculated for districts with fewer than 5,000 students (such as 9-R).

• Increase money for students who qualifies for free-or reduced-price lunch, not just free lunch, as well as students with disabilities and English language learners.

• Decrease emphasis on cost of living. Only districts that are the most expensive would get additional funding. (In 2018, Durango ranked 10th highest in cost of living among the state’s 178 districts.)

• Create a stipend that would give extra funds for each student in Colorado.

• Lift requirement that districts must have at least 50 students to receive funding. It’s unclear how much these changes would cost. The committee plans to meet Jan. 6 with information on the price tag of implementing the new formula.

One item in the bill would reduce total program funding for all districts. Even with that potential decrease, a district’s funding for English language learning or special education would not be affected.

Then, in the 2022-23 school year, districts would get half the difference between calculations of the new and old formula. It won’t be until the 2023-34 school year that the new formula will be the only one used. The Legislature is also considering a separate bill that would push districts to adopt uniform property tax rates. Right now, due to the complicated interaction of state law, some districts pay most of their school costs from property taxes, while others get a large share of funding from the state. On top of that, some districts, such as Durango 9-R, have passed special property taxes to supplement what the state allocates.

If a uniform property tax was adopted, it could eventually free up hundreds of millions of dollars in state money for K-12. However, a similar proposal last year was pulled by its chief sponsor, who feared it would hurt the districts he represents.

Missy Votel contributed to this story, which was edited for length. To read it in its entirety, go to www.cpr.org

While the state tweaks its school funding formula, Durango School District 9-R is considering revamps of its own. The district recently released a Facilities Master Plan, which estimates around $400 million in long-range spending over the next several years. Plans include safety measures; deferred maintenance; a new technology center; a tear-down and rebuild of Miller Middle School; new schools in Three Springs and Twin Buttes; and affordable housing for 9-R staff, among other things.

“We are presently planning for the district’s future so we can ensure the continued success of our students. Many Durango 9-R schools were built more than 40 years ago and need to be repaired and upgraded,” read a statement from 9-R. “Upgrades to our schools as well as possible renovations and/or new facilities will not only enhance school safety and operational efficiency, but also ensure that when our students graduate they are college and career-ready to meet the demands of today’s workforce.”

Other possibilities include grants through the state’s “BEST” (Building Excellent Schools Today) fund, which could provide 20 to 29 percent of the funding. The district would also make up to $20M by selling unused school properties, such as the current administration building downtown, and save another $3M a year by closing low-enrollment schools.

The district’s Long-Range Planning Committee meets again Jan. 16 to discuss the plan, with recommendations slated for its Jan. 31 meeting.

To review or comment on the plan, visit www.durangoschools.org/apps/news/article/1139756.