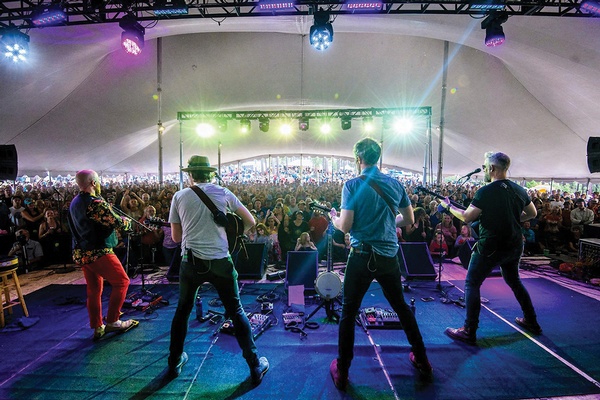 A band plays in the before times at the Pagosa Folk N' Bluegrass Festival on Reservoir Hill. Although festival organizers have cancelled this year's festival in its usual iteration, they are exploring options for a "re-imagined" festival, as are planners at Telluride Bluegrass. /Courtesy photo

Broadway wasn’t the only venue to go dark last summer. The pandemic also pulled the plug on festival season in Southwest Colorado. But, there is hope for festivarians on the horizon. Although the 2021 festival season won’t be the free-for-all camping lovefest of years of yore, smaller-scale musical offerings in some form are reportedly in the works. Think of it as festival lite.

Last week, community radio station KSUT announced the cancellation of its annual Pagosa Folk ‘N Bluegrass, slated for June 4-6, as a three-day camping event due to uncertainties surrounding COVID-19. However, festival organizers said they are exploring other options.

“We are hard at work behind the scenes re-imagining a hybrid offering of in-person and/or live stream performances for that weekend, and are deferring to state, regional, tribal and local restrictions and advisements, as well as monitoring vaccine distribution as we craft an experience for all to enjoy,” festival organizers wrote. “We dearly miss our live events, and all of you, and appreciate your patience as we continue to look forward to the return of safe, live music gatherings.”

Organizers said they are still optimistic about hosting their Four Corners Folk Festival on Reservoir Hill, which bookends the summer fest season on Labor Day weekend. “We are still holding out hope that we will be able to proceed with the Four Corners Folk Festival … but acknowledge we may all need to embrace a few logistic changes that will make it possible for us to gather, and will only proceed if we are able to do so safely.”

For updates and announcements on the Pagosa and Four Corners Folk fests, stay tuned to: ksutpresents.org.

Meanwhile, on the other side of the mountains, organizers of the Telluride Bluegrass Festival, which is hosted by Planet Bluegrass, are exploring their options for the annual solstice bacchanal in Town Park.

What would have been the 47th annual last year was abruptly cancelled due to COVID, bur organizers say they are also exploring the idea of a scaled-back festival.

“It’s a work in progress,” festival organizer Craig Ferguson told the Telluride Daily Planet last week, noting that planners are moving ahead with a mini festival or possible concert series given the current optimism over the vaccines and drop in cases. “If we’d been asked about a festival this summer six weeks ago, with where we were with the pandemic, we would have almost definitely had to say no,” he said.

Right now, organizers are laying the groundwork for a mini-version of the live festival, with fewer acts, fewer days and fewer festivarians. In keeping with social distancing guidelines, organizers believe by summer they will be able to safely host 2,500 people in Telluride’s Town Park, subject to town approval – still a far cry from the 12,000 or so fans that cram into the park for a typical festival.

Organizers are also looking into the possibility of a series of bluegrass shows across multiple weekends, allowing for smaller crowds but more opportunities for concertgoers to attend. Ferguson said under this format, the first weekend would host the “old-timers” of the festival – the bands that have played the festival the longest – with subsequent weekends hosting groups of shorter tenure with the festival.

“It’s quite a process, and we’re not going to try to pretend that we can be what we usually are,” Ferguson told the Planet. He also added that festival vendors, Night Grass shows and the volunteer program may all have to be axed this year, due to lingering concerns over the pandemic.

“Indoor stuff is just so much harder,” he said of the late-night shows at indoor venues around town. “The idea that people are going to socially distance after beer 30, when it’s midnight – we just don’t want to take that kind of risk.”

Under current public health restrictions, Town Park would be able to host about 500 people maximum, but officials are hopeful current virus trends will ease restrictions by summer and allow for higher capacity.

Ultimately, though, all events taking place in Town Park will have to be in compliance with state and county public health orders, and town officials and organizers are waiting for further direction on what precautions and restrictions will be required for summer festivals.

For updates on Telluride Bluegrass, go to: www.bluegrass.com.