Under siege
Neither fire, smoke, nor searing heat can stop the public land swarms 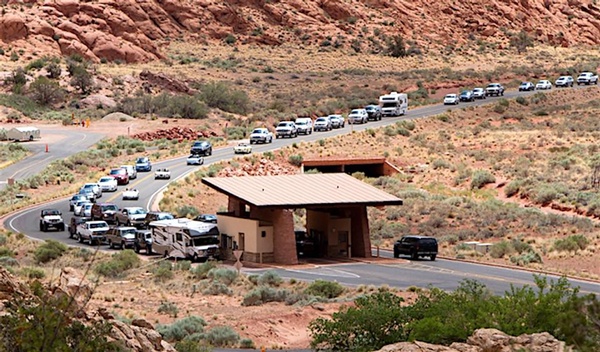 Cars line up on the entrance road to Arches National Park in Moab./ NPS photo

I’m old enough to remember, way, way back to the days of yore, when federal officials and gateway-town chambers of commerce were wringing their hands over a nationwide decline in visitation to national parks. Over a 13-year period, visitor numbers to 58 “nature-based” national parks dropped by 7 percent, even as the nation’s population was increasing.

It was so worrisome that a few economists wrote a report on it, titled, you guessed it, “Declining National Park Visitation,” published in the Journal of Leisure Research. The authors acknowledged that the decline was partly attributable to “videophilia,” as well as “changing childhood socialization that includes less nature play.” But just as important, they concluded, was the stagnation of middle-class incomes combined with the rising cost of visiting the parks. Americans simply could no longer afford national park vacations.

Those, of course, were ancient times. That report was published in … (checks notes) … 2014. Yes, you read correctly: Folks were freaking about a lack of people in the parks just seven years ago. We can probably check that concern off our list.

Even as the report was being published, visitation trends were swinging back upward. It might have had to do with falling gasoline prices and marketing campaigns, such as Utah’s “Mighty Five,” launched in part to reverse the decline. And the buildup to the 2016 National Park Service’s centennial celebration brought more attention to the parks. By 2018, overcrowding at the parks, especially those in Utah’s Canyon Country, had become a major concern. But we hadn’t seen nothing, yet. After a brief respite during the spring of 2020, visitor numbers are surging. The same nature-based parks that were losing traffic a decade ago are now getting flooded, and neither searing heat, smoky skies, nor flash floods can drive folks away.

Visitation during the first six months of this year to the nine national parks I surveyed across the West was up by 1.4 million over the same period in 2019 (2020’s numbers were skewed by COVID-19). That’s saying something, considering that even back then a lot of folks – me, included – were ringing the alarms about overcrowded parks. Zion’s year-to-date numbers are up by a whopping 400,000 over 2019, which was a record at the time. More than 750,000 people swarmed Grand Teton National Park during the month of June – that’s 25,000 per day. Most worrisome to me is the 25 percent jump in visitation at Canyonlands National Park, a place that once was considered too undeveloped to attract big numbers.

But what to do? It’s a quandary, for sure: It’s a good thing that folks are getting outside and developing a love for America’s quasi-wild places. Maybe they’ll be more inclined to fight to save those places. And yet, that love is likely to be tarnished by traffic jams and crowds. Increasing entrance fees will turn parks into preserves for the wealthy. Limiting visitor numbers may just send the overflow into adjacent public lands, where there are no rangers to keep crowds from wrecking the place.

I’m sure someone’s writing up a report analyzing the surge and trying to find solutions. In the meantime, I guess there is one way to keep visitors at bay: A massive rainstorm that turns an already negligible entrance road into a raging river, as recently happened at Chaco Canyon.

Or, you can get rid of a good portion of the water in a place where recreation depends upon it. During the first four months of this year, visitation at Glen Canyon National Recreation Area – aka Lake Powell – was down significantly. Thanks to low water levels, launching big boats is pretty much impossible.

It’s safe to assume visitation to Powell will now plummet. Me, I’m already planning my visit.

The Land Desk is a thrice-weekly newsletter from Jonathan P. Thompson, longtime journalist and author of River of Lost Souls, Behind the Slickrock Curtain, and the forthcoming Sagebrush Empire. To subscribe, go to www.landdesk.org.