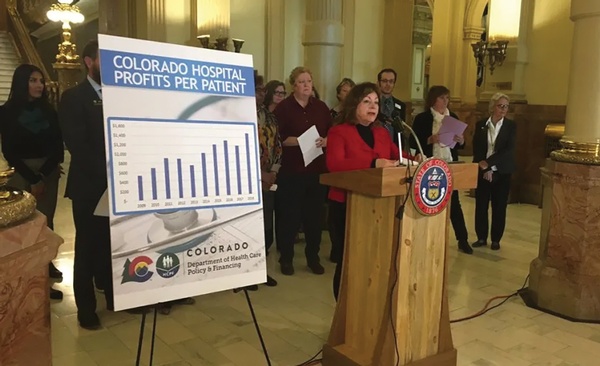 Lt. Gov. Diane Primavera unveils the state report on health care costs Jan. 23. Among other things, the report found that Colorado's hospital costs are 14 percent higher than the national average and hospitals in the state had the second-biggest profits. Hospitals contend costs are higher because they are under-reimbursed for Medicaid and Medicare./Photo by John Daley, CPR New

High prices at hospitals are driving up the cost of health care more dramatically in Colorado than elsewhere in the United States, according to a recent state report.

The report on cost-shifting, which was released Jan. 23, comes as Gov. Jared Polis and his administration are battling with hospitals over how to rein in costs, a fight that promises to get even more heated as the legislative session unfolds.

Top Polis health officials contend that hospitals – and the cost to get care at them – are mostly to blame for the state’s ballooning health costs. They say hospital operating expenses in Colorado in 2018 were 14 percent higher than the national average.

Lt. Governor Diane Primavera said, on average, Americans pay twice as much for health care compared to those from other developed nations. At the same time, they only garner “middle-of-the-pack results” and the lowest life expectancy in the developed world.

“So the question is: If all the money we spend on health care isn’t making us healthier, then where is all the money going?” Primavera asked.

It’s a view hospital leaders vehemently deny. Instead they say a complicated mix of factors, including the state’s high cost of living and competitive job market, help inflate hospital costs as well.

However, the report found hospital profits shot up by more than 280 percent between 2009-18. Profit per patient rose to more than $1,500 a patient, more than triple the figure from a decade earlier.

Simultaneously, the study, by the state’s Department of Health Care Policy and Financing, also reports uncompensated care in Colorado – care that hospitals give but are not paid for – is at historic lows. A fee on hospitals, as well as the launch of the Affordable Care Act, cut the state’s uninsured number in half. It found hospital financial losses due to charity care and bad debt had plummeted by more than $385 million a year since the state implemented the ACA’s Medicaid expansion. That program covers low-income Americans with health insurance.

The state report concludes that it’s not shortfalls in public insurance but “strategic hospital decisions” that are driving the high costs. In essence, the state says hospitals are shifting costs onto privately insured patients and profiting to the tune of billions of dollars.

Increased funding from public, taxpayer-backed programs aim to reduce private insurance premiums and out- of-pocket costs. But those savings are not being enjoyed by consumers and employers, according to the report.

Hospitals have maintained that the shift in costs to privately insured patients happens because Medicare and Medicaid reimburse hospitals at rates well below what the care actually costs.

“Cost shift exists because of chronic underfunding of state and federal public health care programs – namely Medicare and Medicaid,” Lonborg said. “The aging of Colorado’s population has driven significant growth in Medicare, which now under reimburses hospitals by 30 cents for every dollar.”

Lonborg conceded that hospitals have improved profit margins over the past year but said that was due to the state’s strong economy and population growth.

The state’s numbers do not take into account many expenses such as taxes, hospital-owned physician practices and training the next generation of providers, she said.

“This report is distracting from the unintended, yet predicted, consequences of the state’s own policies,” Lonborg said.

She said the state’s reinsurance program – touted by Democrats as saving consumers 20 percent on average – caused prices to increase for some consumers, and now the state is trying to force hospitals to pay $40 million one year early. She said that has the potential to endanger the care hospitals provide.

“Colorado hospitals’ losses last year from Medicare and Medicaid hit a record $2.5 billion,” Dan Weaver, vice president of communications at UCHealth, pointed out. “The report shares that charity care has decreased, which is accurate, as more people are eligible for Medicaid. But their announcement leaves out hospitals’ significant losses from Medicaid under-reimbursements.”

“Hospitals could have been passing on significant savings” from reduced charity care costs and increases in Medicaid payments to privately insured consumers and employers, the report says.

If hospital costs in Colorado more closely matched national averages, the state could have saved patients more money, it adds.

In addition, navigating the state’s health-care system is still a financial nightmare for some. Pamela White, a former reporter from Longmont, described a long and difficult recovery from breast cancer that has drained her life savings.

“I am grateful that I received the care I needed, but it came with a life-altering cost. I couldn’t work for a year, although I had insurance. I paid an enormous sum out of pocket. I spent my entire life savings and burned through my retirement,” White said.

And the nightmare isn’t over. White’s premium has continued to go up, and last year she paid about $15,000 out of pocket in medical bills and the bulk of that was her premium.

“I was paying more than the cost of my mortgage just to have access to health care,” she said.

White noted all this happened as Colorado hospitals were reporting the second healthiest profit margins in the nation.

Kim Parfitt, a retired school teacher from Lakewood, described similar frustration. She said her retirement package includes health insurance but premiums are paid out of pocket and the plan has a high deductible.

Last fall, she ended up in a local emergency room to treat a virus and was released after two hours of basic treatment. Parfitt said she was shocked when she received a bill with an out-of-pocket amount of nearly $5,000.

A call to the hospital’s financial-assistance office didn’t help. The most surprising charges were a $650 and $7,000 facility fee.

“I worry that as my retirement has only just begun, this is likely not the last time I will need hospital care,” Parfitt said. “This is out of balance with what the average citizen like me can afford. I wonder what that will mean for me and others like me as we age?”

The report comes as the relationship between Polis and hospitals is getting more contentious.

In his annual State of the State address Jan. 9, Polis singled out hospitals for high profits as the state’s health care costs continue to rise – Front Range hospitals took in more than $2 billion in profits in 2018. He went on to blame them for using those profits to run ads against public-option Legislation, which would utilize private insurers to offer every Coloradan health insurance. Officials say it will be cheaper because it lets the state set payment rates and requires insurers to use more of the money they take in for actual medical care – not profits.

Adding to that controversy, the Colorado Hospital Association has sued the administration over payments into a fund that pays for Colorado’s reinsurance program. That program basically acts as insurance for insurance, reimbursing insurers for covering the highest-cost patients.

One hospital CEO agrees with state leaders on the need for change, but not the solution. “We’ve got a problem. We’ve got to make health care more affordable, more accessible and more transparent. So with that, I agree that we’ve got to find solutions,” Centura Health President and CEO Peter Banko told CPR in an interview.

But Banko said he worries a public option, one that includes government price controls, is the wrong direction. Banko called for more collaboration on all sides.

“Price is only one small part of the equation,” Banko said. “We’ve been able to partner with health plans and deliver greater savings and more affordability.

To read more from CPR, go to www.cpr.org.