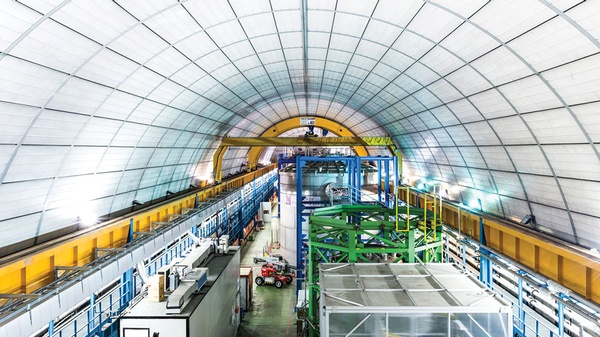 Argon gas from Cortez will be sent to this underground research lab in Italy – the largest in the world – in an attempt to find the elusive dark matter. The international effort hopes to understand one of the biggest mysteries in the universe./ Courtesy Photo

Could Southwest Colorado help unlock one of the longest standing mysteries of the universe? It turns out, yeah, it actually could.

“Thanks to this argon gas found in Southwest Colorado, it could be the next big step in discovering dark matter,” Cristiano Galbiati, a Professor of Physics at Princeton University, said on a Zoom call last week while in Italy. “It’s been a long time coming. It’s huge.”

To put it simply, 85% of the matter in the universe is unknown and unaccounted for, and “dark matter” is the term scientists use to describe it. While experiments have been conducted for decades to nail down what dark matter actually is, we still have virtually zero knowledge or understanding of it.

However, researchers are confident that an experiment right here in our backyard in Southwest Colorado will likely lead to a massive breakthrough. Basically, scientists from around the world have teamed up with Kinder Morgan, which drills for carbon dioxide around Cortez, to extract a gas known as “argon” that scientists say will help finally detect the existence of dark matter.

To try and wrap our heads around the concept of dark matter, we turned to YouTube and the friendly face of astronomy, Neil deGrasse Tyson.

“My best answer is, we haven’t a clue,” Tyson said, unhelpfully. “We don’t even know if it is matter; dark matter is simply what we call this thing which we know nothing about. We shouldn’t call it anything, because we don’t know what it is.”

Wow, that wasn’t helpful. So, we clicked on more of Tyson’s YouTube videos.

Basically, Tyson explained when you add up all mass in the universe – the stars, galaxies, planets, comets, black holes, etc. – the total mass does not add up to the speed and rate of gravity operating in the universe, according to the laws of gravitation. This anomaly was first discovered in the early 1930s but has since been detected in every single galaxy, amounting to an unexplained 85% of the matter in the universe.

“The speed galaxies move is faster than the collective gravity each galaxy can sustain,” Tyson said. “At the speed they move, the galaxies should have flown apart from one another long ago. But they didn’t; they are still bound together. So it’s not a matter whether dark matter exists or not. We know it’s real, because it’s a measurement.”

Proof in the particles?

The leading theory in the scientific community hypothesizes that dark matter is an undiscovered family of particles that doesn’t react or interact with known particles we’ve documented (I know, it’s getting heady now). In fact, the only evidence we have of dark matter is its impact on gravity.

Years ago, however, researchers determined a noble gas known as argon could be key to unlocking the mystery. Argon isn’t reactive with its environment. So the theory is, once converted from a gas to liquid, argon emanates a specific light signal when coming into contact with dark matter (researchers hypothesize the signal is heavy and slow, different from other well-documented particle reactions).

“Argon is unique, because it allows you to tell precisely whether you’ve detected dark matter,” Galbiati said. “It’s like a lightning bolt striking another lightning bolt.”

Taking argon from the atmosphere, however, doesn’t work, because it’s too impacted by radiation from the sun and other factors. Instead, researchers needed the purest form of the gas possible, which launched an international search. Around 2008, Galbiati and a colleague landed on little old Cortez, on a drill site 15 miles north of town known as Doe Canyon, where Kinder Morgan extracts CO2 from below the Earth’s mantle. Because the gas is extracted so far down, it’s almost entirely pure, Renshaw said.

A call to Kinder Morgan was not returned for this story.

“As far as we know, the site at Doe Canyon is the only source of underground argon in the world where the concentration of argon was high enough where it was feasible to extract at the levels we need,” Renshaw said. “It puts our project in a special place to carry out this work.”

A processing facility to convert the argon from gas to liquid was constructed in Italy and sent to Cortez, which will be fully installed in 2023. As Kinder Morgan extracts CO2, argon gas (a byproduct of that process) will be diverted to that facility. Once in liquid form, the argon will be sent to the “Laboratorio Nazionale Gran Sasso” in Italy, the largest underground research facility in the world where the detection for dark matter will really begin.

To imagine the detector, think of a big vat filled with liquid argon, Galbiati said. Around it are giant solar panels that, when hit with light, produce a signal. When that collision will happen, however, is anyone’s guess.

“We sit and wait,” Galbiati said. “But it’s not by chance; it’s a probability. I’m pretty confident this will be a significant success. But we obviously can’t guarantee we’ll find dark matter, because no one knows what it is.”

In a positive sign, though, during the early 2010s, this same research project built a much smaller detector, which led scientists to believe they could separate the signal of dark matter, justifying this larger experiment for the elusive substance.

“If we do find dark matter, it’s going to unlock physics,” Galbiati said. “It’s such an important search and question. It’s like exploring a new world.”

The project even has a Fort Lewis College tie. Laurie Williams, Chair and Professor of Physics & Engineering, said once the processing plant is operational, the idea is to involve undergraduate students in the international experiment. Students will even travel to Italy to see the underground lab (Telegraph higher ups have yet to respond whether they intend to fund an all-expenses paid trip for this reporter).

But even Williams says the project holds immense promise for unlocking one of the great mysteries of the universe.

“If they detect dark matter – and I think they will – they will win the Nobel Prize,” Williams said. “It’s that caliber of work, and it’s amazing that FLC can be part of this international collaboration.”

Experiments with the liquid argon should happen in full force in Italy by 2025, and it won’t be until at least 2030 that the first full results will be released, Renshaw said. Known as the “Urania Project,” the effort is funded by a $2.9 million grant from the National Science Foundation.

In the meantime, we can only dream what the possible reigning in of dark matter could entail – a new energy source? Fuel for intergalactic spaceships? Real lightsabers?

“If we can understand dark matter, maybe there’s a way we can use it to our advantage,” Renshaw said. “But we have to leave it at that – without knowing what dark matter is, it’s really difficult to say what the advantages could be.”