Up and coming
No wave? No problem for latest toy to hit Durango shores 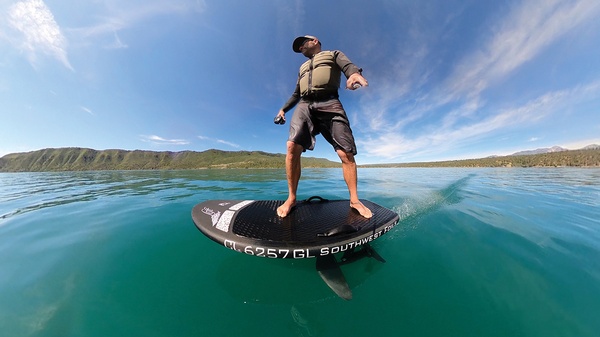 Move over Wibit, paddleboard and surf boat, there’s a new toy on Lake Nighthorse: the efoil board.

Perhaps you’ve already spied one of these space-age Jestsons-like contraptions hovering above the water, its rider effortlessly cruising and carving along. Powered completely by lithium batteries, the boards utilize a small motor that lifts the boards above the surface on a carbon winglike structure (aka “foil”) allowing them to easily glide through chop, white caps and flat water alike. And, for the quiet Nighthorse crowd, since the boards are electric, they are completely silent.

“It’s smooth and quiet. When the waves are high, I’m above them,” Bryan Saren, the efoil master, said during a recent lesson/tour at Nighthorse.

If last you checked a foil is something you use to wrap leftovers or give yourself a bad frost-and-tip job, you’re not alone. It’s a relatively new phenomenon in the water sports world. Although classic foil boards, i.e. with no motor, have been a fringe occurrence around the world’s surf breaks since the 1960s, it’s only in the last 10 years that electric boards have come on the scene.

The boards employ an old if not obscure technology that’s been around for more than a century: the hydrofoil. According to a reporter’s best friend, Wikipedia, the French and Brits were the first to pioneer and patent the technology on a watercraft, around the turn of the 19th century. Foils entail laws of physics that we won’t go into here, mostly because we’re don’t fully understand them, except to say they give boats less drag, allowing them to magically elevate above the water. And they look really cool, too.

That’s what first caught Saren’s eye when son Grey was watching foil board videos on the boob-Youtube a few years back.

“I thought, wow, those look cool,” Saren recalls. He did a little research, and that’s when he was blown away yet again. The price tag for making all those surface-dwelling boarders green with envy was a cool $12,000. (Then again, when you consider the cost of a surfboat and the monster truck to tow said surfboat, efoils can seem downright reasonable.)

Saren, who most recently finished building out the new Zia North, wasn’t deterred by the cost. He called the company, Puerto Rico-based Lift, and asked if they needed any reps, as none were listed on the website. As luck would have it, they did and took him up (no pun intended) on his offer.

Saren is now the sole efoil rep, rental outlet and foil board whisperer for Lift in the region. He offers lessons, tours and rentals, not just on Nighthorse but Navajo, Powell and virtually any other body of water. In fact, they are just at home on the salty coast as they are inland. He recounts a scene over spring break, when he and his kids took the efoils to San Carlos, Mexico, to ride on the Gulf of California, and he was joined by Flicka and friends.

“I was riding with dolphins right next to me,” he recalled.

Of course, before one can ride with the dolphins, one must swim with the minnows. In other words, a little instruction is first in order, mostly due to the aforementioned price tag – wrecking one of these puppies would not be cheap. And while balancing above the water on a what amounts to a pogo stick may look tricky, Saren swears it is not.

“If you can stand up on a paddleboard, you can stand up on one of these. It’s easy,” he assures me during the recent lesson. Being of a not-so-young age, I am naturally hesitant to try new water sports, or really anything new, especially if it involves me looking stupid. In a wetsuit. But because I have known Saren since my early Durangatang days – and to my knowledge no one has been killed or maimed efoiling on Lake Nighthorse – I agree to participate. Plus, I am a glutton for a story.

We start with a beach sesh, and to my relief there is no pop-up involved with foil boarding as in surfing, so maybe there is hope I can graduate from the foam pile. In fact, a handheld gizmo, kind of like a joystick with a trigger, does all the work. Wetsuits, helmets and life jackets are provided. And best of all, the helmets come mic’ed, allowing Saren to give you step-by-step instruction.

“It’s all a matter of an inch here and an inch there,” he reassures me. “I’m going to be in your ear walking you through all of this.”

After going over the basics – determining I am “goofy,” standing up, turning, how to fall, how not to fall, and landing and taking off (something called “touch and go”) – we hit the water.

Now for anyone who learned to water ski via the old school enema technique, I would like to say foil boarding is the exact opposite. With the calm voice of Saren in your ear, you lie on your stomach until you come up to a comfortable cruising speed (in my case a “3” on a scale of 15, but you gotta start somewhere.) Then, when you’re comfortable with the foil boarding equivalent of boogie boarding, you attempt to slowly stand up. Even this is a relaxed, easy-to-follow process, starting with all fours, then knees, then front leg and then back leg.

“We’ve got all the time in the world, we don’t have to rush things,” he says, sensing my complete and utter lack of coordination. According to Saren, folks usually get up and are riding foil (i.e. above the water) within 15 minutes. Kids and women tend to be quicker at picking it up due to the subtle hip movements required to lift and land the board. (Sorry dudes, you can’t muscle this.)

I’m not going to lie, I took some spills – including an unrecommended forward dive. But before long, guided by what I can only describe as the voice of god in my ear, I was able to get up and get on foil (a few times a little too high for my liking. Like rock climbing and sky-diving, sometimes it’s probably best to just not look down.)

Indeed, there was a kind of almost guilty serenity – like one person shouldn’t be allowed to have such a sublime surf-like experience with so little pain. No sand in the orifices, no suit malfunctions, no arms ripping out of the sockets. And no enemas – nasal or otherwise. In fact, if it wasn’t for an awful cramp in my trigger hand foiling my uh, foiling, I’m pretty sure I could’ve gotten her up to 4. And maybe even seen some dolphins. But there’s always next time.

For more info on Southwest Foils, go to www.southwestfoils.com. 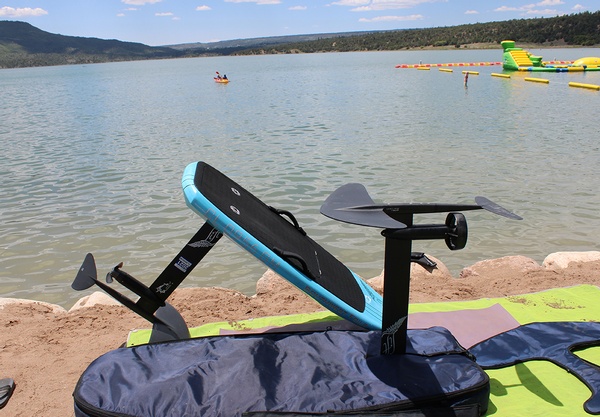 Wing-shaped carbon foils along with a small electric prop are what give the efoil boards lift, allowing them to glide with ease over flat and choppy water alike./ Courtesy photo