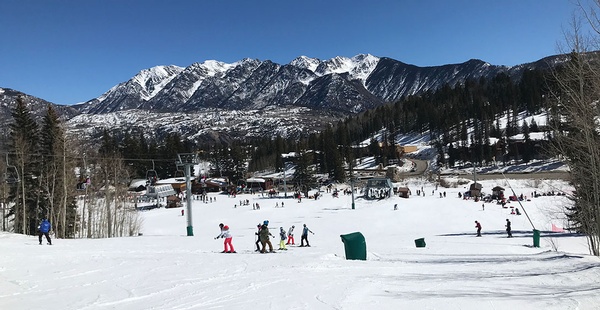 Purgatory Resort hopes to increase the amount of beginner-intermediate terrain with expansion, but faces a number of issues going forward./ Courtesy photo

Purgatory Resort is set to get the green light for expansion, but don’t expect to be making fresh tracks on new runs anytime soon.

Purgatory, about 25 miles north of Durango, operates on public land through a special-use permit from the U.S. Forest Service. The resort has hoped for years to expand its skiable terrain, specifically for beginner to intermediate runs, which resort officials say are in short supply.

This most recent push for more trails started in early 2020, and, after more than two years, the Forest Service is expected to finalize the plans on Friday. However, it’s going to be an uphill climb for Purgatory before any construction can begin.

As part of the expansion process, a number of issues arose over unfinished restoration projects Purgatory is on the hook for, as well as lack of parking, snowmobile access and possible impacts to stream health and aquatic life, namely populations of  threatened native cutthroat trout.

Even so, Purgatory Resort remains hopeful that expansion construction will kick off in summer 2023. When all is said and done, the development, known as the “Ice Creek Pod Project,” will bring a 3,400-foot high-speed quad lift and four new runs. It’s estimated the new runs will cause about 2.5 acres of ground disturbance and 26 acres of tree removal.

“When you enter this kind of process, it’s really hard to predict how long it will take,” Dave Rathbun, general manager of Purgatory, said.

Purgatory Resort first pushed for expansion of its easy to intermediate runs back in 2008 as part of a larger, big picture plan for growth. The current plan for expansion is almost identical to the one in 2008 and would add about 45 acres of skiable terrain just east of the Hermosa Park Express lift.

And the need is apparent, resort officials say: only 18% of Purgatory’s 2,300 acres of skiable terrain is suited for low-intermediate skiers, below the national ski area average of about 25%. This deficiency, combined with a surplus of novice terrain, has resulted in more skiers using beginner runs at faster speeds, causing safety concerns.

As it stands, the resort’s main place for beginners is the Columbine area, but with temperatures continuing to rise each winter, resort officials say it’s affecting snow conditions. Ice Creek, however, is at a higher elevation and would offer more beginner options, especially toward the end of the season.

Ultimately, the Forest Service approved the big picture development plan in 2008, and therefore the Ice Creek expansion. But, at the time, issues over the impacts to lynx habitat and other environmental concerns caused resort officials to put that specific project on hold. Over the ensuing years, Purgatory tried to look for other locations within its permit area to expand, but it became clear Ice Creek was the only viable option, resort officials have said.

In 2020, to the surprise of some, the Forest Service announced it was going to approve and accelerate the Ice Creek expansion process. But, after pushback during the public comment process, the Forest Service reverted back to its standard environmental analysis process. “We said, ‘You can’t fast track this one, given all the history and concerns involved with the project,’” Jimbo Buickerood, lands and forest protection program manager with San Juan Citizens Alliance, said.

In fall 2021, the Forest Service released a proposed “environmental assessment,” which in essence recommended the approval of the expansion, with some tweaks to address concerns. Even still, this set off a public comment period where two main issues were continually brought up: the impact to stream health and cutthroat trout, as well as parking access for snowmobilers.

Noel Ludwig, the Forest Service’s hydrologist who is involved in the project, said nearly every part of the proposed action was changed or tweaked in some way based on public feedback, including lift line location, run alignments, snowmobile access and grading, among other components. A skiing trail, for instance, was moved to avoid impacting the Rico-Rockwood Wagon Road, a site eligible for the National Register of Historic Places.

However, one of the major outstanding issues is that Purgatory has failed to start or complete a number of restoration projects on its terrain that date back to the 2008 project, like closing and revegetating certain roads and installing drains and culverts – all efforts aimed at restoring the landscape as best as possible for the benefit of the watershed. Some of these projects will be required before Purgatory can start expanding, Ludwig said, and others will be folded into a separate requirement process that must be completed within three years.

Purgatory, for its part, said a change in ownership in 2015 (to James Coleman and Mountain Capital Partners) and unclear requirements on timing have held up the projects. “We want to do the right thing, and we know we are accountable for mitigation measures,” Rathbun said. “It was a bit of a mess, but we have clear expectations now.”

Cutthroats in the crosshairs

As it turns out, upon further study, impact to lynx habitat was not as great as initially feared (less than .1% of habitat could be impacted). Instead, the main environmental concern is that all the development and infrastructure required for the expansion will cause increased sediment to run into Ice Creek and the East Fork of Hermosa Creek. Both these stretches are tributaries and part of the Hermosa Creek watershed, where 23 miles of stream were restored to native cutthroat habitat – the longest continuous stretch in the state. Now, many worry this costly, decades’-long effort could be affected.

“The Ice Creek (expansion) will create a new burden on the headwater streams,” Colorado Parks and Wildlife wrote in a letter to the Forest Service. “Expanding skiable terrain and developing water resources for snowmaking … could have significant impacts to the Hermosa Creek watershed.”

The Forest Service, for its part, says the potential risks have been well studied, and measures have been included in the plan that call for Purgatory to prevent any impact to water quality, and therefore the cutthroats. “There will be stream health and fish monitoring to make sure there’s no long-term impacts,” Ludwig said.

But environmental groups remain uneasy, given Purgatory’s past inability to complete restoration projects, that this requirement could be ignored or not followed through. “My concern is Purgatory hasn’t been holding up its stewardship commitments,” Buickerood said. “And I have no confidence anyone will hold them to that. It’s just a big mess, and these projects need to be taken care of before a massive expansion.”

The area behind Purgatory is prime and popular snowmobiling terrain, yet, as it stands, there isn’t adequate space for loading and unloading  their  snowmobiles, and even less space to park their vehicles.

Purgatory has been on the hook since 1998, which was again reaffirmed in that 2008 project, to build a parking lot specifically for snowmobilers. But a completion date was never set, and for years, it has languished (one of the main issues, resort officials say, is the original location for the parking lot could cost $1 million for just 30 vehicles).

“We’re not even allowed to park in the Purg parking lot; we have to unload our snowmobiles, park on the service road and walk back up,” Meador said. “Purgatory needs to address their parking, even for their skiers.”

Indeed, Rathbun said Purgatory is well aware of parking issues. He said it’s possible the resort will add 200 more parking spaces before the 2022/23 winter season. And, he believes there are other locations on site that could accommodate a parking lot specifically for snowmobilers.

Back to the drawing board

This summer, the Forest Service and Purgatory plan two on-site tours; one with environmental groups and another with snowmobilers, to work out issues and get a better understanding of what needs to be done to resolve problems on the terrain.

Although the Forest Service is set to publish the legal notice of the decision to approve the project on Friday, expansion work is not imminent – Purgatory still has to submit construction plans and complete restoration projects before any on-the-ground work can happen. Ludwig believes all restoration projects required on the front end are doable this summer.

Given contractors are in high demand, though, Rathbun believes it’s likely the resort won’t be able to start the Ice Creek project until summer 2023. The resort does, however, plan some previously approved projects this summer.

“In the next month or so, we’re going to start sharing our overall vision that we’ve had in the hopper for some time,” Rathbun said. “We’re at the point now where we have enough dry powder, if you will, to afford some of those bigger projects.”