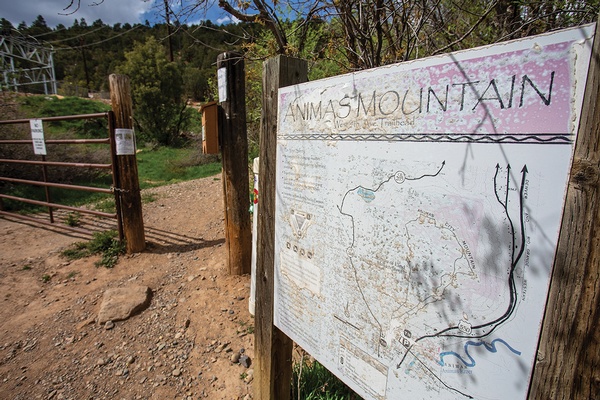 Animas Mountain is one of several area trail systems that could see some changes under a newly released plan proposed by the BLM Tres Rios Field Office. The proposal also looks at making changes in Grandview, Perins Peak and Turtle Lake./Photo by Stephen Eginoire

Changes are coming to trail systems across La Plata and Montezuma counties. This April, the U.S. Bureau of Land Management’s Tres Rios Field Office released a proposed Transportation and Access Plan, officially recognizing many popular pathways and proposing big changes to others.

“The first part is to incorporate the legal trails as system trails,” Mary Monroe Brown, executive director for Trails 2000, explained.

Many of the trails in the Tres Rios district have not been officially recognized because the office was focused on updating its Resource Management Plan, which guides the agency’s decision-making process. Once that was completed in 2015, the agency moved on to updating the trails plan.

According to Monroe Brown, the plan is important because trails and recreation are really what draw people to the area and improve the local quality of life. “We have a lot of companies who relocate people to work in our area because of the lifestyle it provides,” she said.

But issues like connectivity and access, which can be determined by the BLM’s decisions, impact trail users directly. The public has until May 22 to comment on the proposed plan, and Monroe Brown said it’s important for the

BLM to hear directly from the community.

One of the biggest changes in the BLM’s plan is to create a brand new system of trails and an accompanying parking area outside Mancos dubbed the Aqueduct.

This system, which is supported by the Mancos Trails Group, includes almost 12 miles of nonmotorized trails northwest of Mancos off County Road 39.

“This terrain is truly unique and the views are spectacular,” the group touted on its website. “This would be incredibly accessible to folks that live in Mancos.”

The second big change is to add new trails and modify others on Animas Mountain at the north end of Durango. In the proposal, the BLM is looking to combine two trails currently running along the eastern side of Animas

Mountain into one. This new trail will be open to nonmotorized users, including bikes, horses and hikers.

The agency is also suggesting a new nonmotorized trail on the western edge, a new “stacked loop” trail system on the southern edge, and new bike-only trails cutting across the top of the mountain.

None of the BLM’s proposals would allow for electric mountain bikes on nonmotorized trails. E-bikes are still considered motorized travel by the BLM, which stated this was in line with the agency’s national policy.

Another decision catching the attention of Monroe Brown and Trails 2000 is to not officially recognize the Old Car Loop trail in Grandview.

The Old Car Loop comes off the bottom, or north end, of the Yellow Brick Road Trail. Although the trail is not heavily traveled, the BLM’s decision not to recognize it was specifically “due to no public access across private land,” according to the agency’s proposal. The trail cuts just between the lines of private and BLM properties.

However, Monroe Brown said that the eastern side of Durango, which includes Three Springs and Grandview, is likely going to see the most buildout in the years ahead, and residents should be planning for it. Although the Old Car Loop trail hasn’t seen much traffic in recent years, it’s part of the larger conversation of trail connectivity the community needs to have as it continues to grow.

“We need to look at growth and development,” she explained. “Those trails connecting to Grandview are a very important part of that growth.”

Another missing piece in the BLM’s proposal for Monroe Brown is any type of connector between Overend Mountain Park and Twin Buttes.

The only change suggested by the agency is designating a looped section off the Hogsback in Overend as pedestrian-only. According to the BLM’s proposal, the reasoning is “to comply with the BLM Tres Rios Field Office Resource Management Plan.”

But, Monroe Brown said Trails 2000 would like the BLM to make a consideration. “What we’re asking is for a very specific and small connecting trail between Overend and Twin Buttes,” she added. “We’re not asking to go through the Perins area.”

Currently, riders can take the Spirit Trail to the Tech Center, but then they have to descend to Highway 160 and ride for about a mile to access Twin Buttes.

Monroe Brown added that Trails 2000 is not asking for any federal funding to create connector trails in places like Overend Park, Twin Buttes, Grandview or Horse Gulch – the group only needs permission.

“Our ask is for the approval,” she said. “We’ll do the work because our community is interested in a great trail network.” 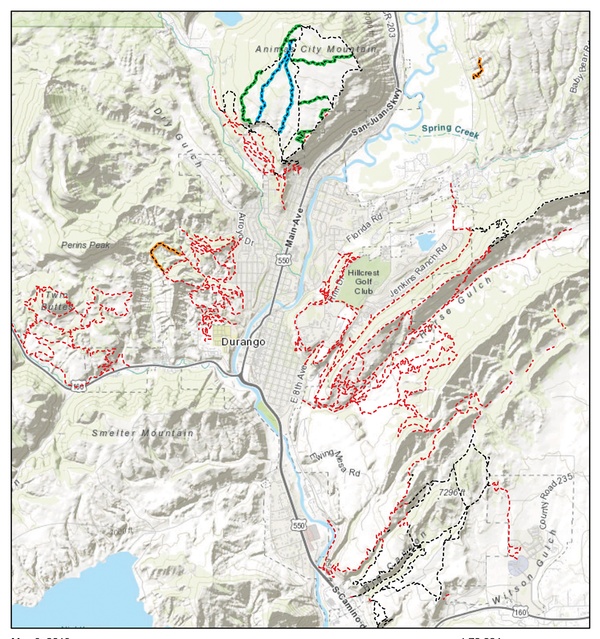 Digging into the details: The Bureau of Land Management's Tres Rios Field Office has proposed changes to several trail systems in La Plata, Montezuma and Archuleta counties. This cov-ers trails in Grandview, Animas Mountain, Perins Peak, Turtle Lake, and others near Durango; and, an entirely new system called Aqueduct as well as changes to Chutes and Ladders, both near Mancos. In addition to biking, hiking and horseback riding trails in the BLM's proposal, the federal agency included some off highway vehicle, or OHV, trails in the Mud Springs area of Montezuma County to the southwest of Cortez. A new parking area, some additional trails, rerouting of other trails and decisions not to recognize others are all a part of the proposal. To check out all the plan and comment, go to eplanning. blm.gov, click on the "Transportation and Access Planning" and then the "Documents" tab on the left side. To see the interactive map, pictured right, go the "Maps" tab and click on "Interactive Scoping Map."