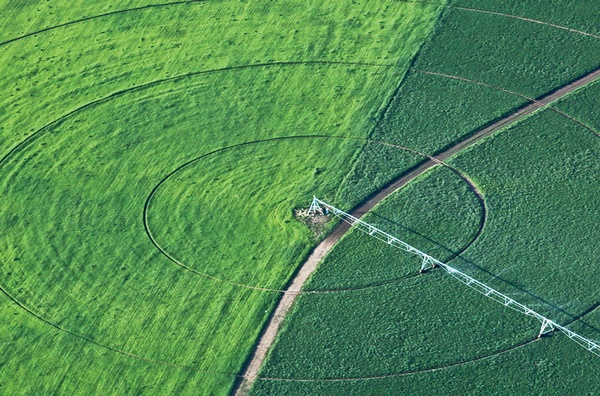 I wrote the essay below – about my parents’ farm’s ditch in the North Fork Valley of Western Colorado – in 2018, which was one of the region’s driest years on record. The essay is every bit as pertinent today, an equally dry time for most of the Western Slope, even if some details have changed: My sister owns the farm now—along with the robust water rights—and my parents moved into town. And recent rains have kept most of the ditches flowing in the valley, at least for now.

But the water inequality persists. Just look at the drought map of Colorado: Everywhere east of the Continental Divide is drought-free, while the entire Western Slope is in some stage of drought, much of it in the dried-blood “exceptional” stage, the driest it gets. As the West gets drier, the water inequality will only get worse.

My parents have a small garlic farm in Western Colorado in the valley of the North Fork of the Gunnison River. They bought the place just over a decade ago, along with a couple of shares of water from the ditch which runs through their property. It’s a nice little plot of rural Colorado with good dirt and nice views, but it wasn’t until this terribly dry summer that they realized how valuable the land is. The Farmers Ditch, diverted from the North Fork near Paonia, has some of the most senior rights in the valley. They are water-rich in an arid world.

Since white settlement began here back in the late 1800s, the communities of the North Fork have revolved around coal and agriculture. Three underground coal mines churned away for decades, their bounty loaded upon mile-long trains headed for power plants in the Midwest and beyond. Paonia and the surrounding mesas have long been renowned for fruit, vegetables, and, for a time, marijuana.

After surging to a peak just over a decade ago, coal began its hasty, nationwide decline, and now only one of three mines in the North Fork is still operating. Meanwhile, small-scale agriculture has taken over as one of the main economic pillars of this idyllic valley: Cherries, peaches, hops, and hemp. Agricultural interests also are a strong political force rising up in resistance to proposed oil and gas drilling because of its detrimental effect on the water, which is becoming more and more precious in a warming world.

Thanks to the dramatically sere appearance of the natural landscape, the North Fork Valley provides a stark visual reminder of the importance of large-scale irrigation in these parts. A ditch along a hillside becomes a sharp divide between the dry, sparse, dusty dobie-land above the ditch; and green, grassy, cottonwood- and cattail-strewn land below it. This is true even where no active irrigation is taking place; the ditches are generally so leaky that they create artificial wetlands in areas that are distant from fields or crops or lawns.

Most of the irrigation water comes from the North Fork, which begins at the confluence of Muddy Creek and Anthracite Creek. Paonia Reservoir sits just above the confluence, on Muddy Creek. Typically the reservoir fills up during the spring and early summer, during which the natural flow in Anthracite Creek is adequate to fill all of the downstream ditches. When Anthracite starts to wane, water is released from the reservoir to keep the ditches flowing, usually into August and sometimes even until late October. In late June or early July the river’s total flow reaches equilibrium with the volume diverted from it, causing the river through Paonia to dry to a tiny, warm rickle that is good for sustaining only crawdads and mosquito larvae.

Even more shocking than the annual desiccation of the riverbed is the way in which so many water rights holders continue to pull their maximum share from the ditch, even if it’s not needed, even if they have no crops or even lawn to irrigate. “Use it or lose it,” the saying goes. Meanwhile, only a handful of the small-scale farmers have bothered to install more efficient irrigating systems, and most of the ditches continue to leak like sieves. That may be fine in a time of abundance, but these are times of increasing scarcity.

Paonia Reservoir — which gets its water from aptly named Muddy Creek — is filling up with mud. When constructed in 1962, the reservoir had 21,000 acre feet of capacity; today only 14,000 acre feet of capacity remain. So the amount of water available to irrigators is diminishing, even during wet years. But this year was one of the driest on record, which prompted downstream, senior water rights holders to put a “call” on the river in mid-June, at least a month earlier than usual, forcing junior, upstream holders to stop diverting water. By the time August rolled around, all but a few ditches in the North Fork had been shut down or had their flows drastically curtailed. Farmers Ditch, meanwhile, kept running right up to the brim.

The farmers of the North Fork Valley make up a fairly tight-knit community. They share seedlings and knowledge, hay balers and tillers, trade garlic for meat. So one would expect them to respond to a water crisis in much the same way, with the haves on Farmers Ditch sharing their bounty with the have-nots whose ditches ran dry. At the very least, you’d expect the haves to cut down on their own water use, even if just out of respect for their less fortunate neighbors.

But that’s not how it works in the arcane world of Western water. This summer most of the folks on Farmers Ditch carried on like they would any other year, using up their entire share of water and letting whatever they didn’t use run off across the mesa tops to evaporate and seep into the earth while their dry-ditch neighbors looked on helplessly. I watched one landowner wastefully dump a steady stream of irrigation water on his dusty horse pasture, turning it into a nasty mud bog where only a few thistles grew, while a mile away crops wilted. Wealth-inequality may be the scourge of our nation, but it’s water inequality that will increasingly plague the arid West.

The ostentatiously water wealthy are not entirely to blame. I’m confident that most of them would have been happy share their bounty if they could. But there’s no simple mechanism for this kind of cooperation. My parents can’t just turn a valve and send their water across the valley to their fellow farmer. The system wasn’t designed that way. It is the system that needs changing.

“The solution is, in a sense, straightforward,” writes John Fleck in his book Water is for Fighting Over, and Other Myths About Water in the West. “Everyone in the Colorado River Basin has to use less water. But no one will voluntarily take such a step without changes in the rules governing basin water use as a whole to ensure that everyone else shares the reductions as well—that any pain is truly shared. We need new rules. Absent that, we simply end up with a tragedy of the commons.”

Fleck’s referring to the macro of the Colorado River Basin here, but it also applies to the micro of irrigation districts everywhere. New rules, new systems, new ways of operating are needed that would incentivize efficiency and that would allow the Farmers Ditches of the world to share with the others in the community who aren’t so fortunate.

When it comes to water, though, we Westerners tend to get entrenched in the use-it-or-lose-it culture, which is anathema to cooperation and to efficiency. Still, this is not unsurmountable. When pushed up against the wall, Westerners have become more limber in their approach to water. Take Las Vegas, which has managed to cut per capita water use enough so that it’s been able to grow its population without robbing Great Basin farmers of their groundwater — at least so far.

And then there’s another, smaller instance of cooperation that bears mentioning. After the Sunnyside Mine upstream from Silverton, Colorado, shut down in 1991, the owners put a boxcar-sized plug, or bulkhead, into the mine’s main tunnel to keep the 1,600 gallons-per-minute of acid mine drainage from going into the Animas River watershed.

Not long afterward, the region suffered through what at the time seemed like a horrible drought, prompting a downstream ditch company to make a call on the Animas River.

That’s when Silverton discovered that the founding fathers had failed to file for water rights back in the early days of the town, leaving the town with some of the most junior rights on the entire river. They faced the very real prospect of having to shut down their municipal water intakes. Instead, the Sunnyside Mine stepped up and opened the valve on the giant plug, releasing enough water (and treating it) to satisfy the downstream call, and buying Silverton time during which it could seek out a long-term fix. (Then the mine shut the valve down again and water backed up in the mine to disastrous effect, but then, that’s another story.)

It’s this sort of out-of-the-box, pragmatic, cooperative thinking that the West is known for, and that has helped many a community transition successfully away from extraction-based economies. Now the warming, drying region is faced with a much bigger, tougher transition, with even higher stakes.

The Land Desk is a thrice-weekly newsletter from Jonathan P. Thompson, longtime journalist and author of River of Lost Souls, Behind the Slickrock Curtain, and the forthcoming Sagebrush Empire. To subscribe, go to www.landdesk.org.