Uranium up and up
As land heals, threats of wounds reopening persist 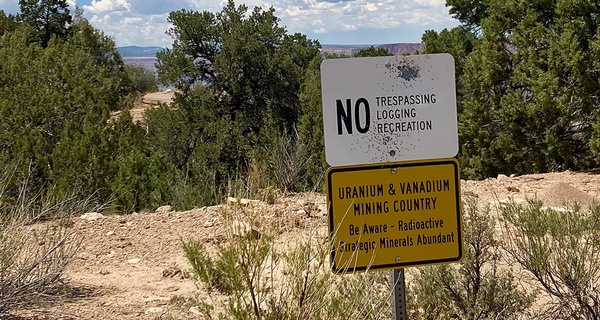 It’s one of those days when the clouds pile up in the azure blue, their shadows gliding across the sandstone and sage, offering a bit of relief from the summer heat. They also promise rain, but I have my doubts. This is the Paradox Valley, after all, which lives up to its name in more way than one, a place of beauty and brutality.

The Uravan Mineral Belt, which roughly follows the lower Dolores River in western Colorado, slices perpendicularly across the Paradox Valley just like the river, giving it its name. The mineral belt, meanwhile, got its name from the elements that lie within: vanadium and uranium. The belt was the center of the radium boom from the early 1900s into the 1920s and was ravaged for uranium from the 1940s into the 1980s. Vanadium was mined here in between.

Jennifer Thurston, the executive director of the Colorado mining watchdog group INFORM, tells me there are 1,300 mining sites, abandoned and otherwise, in the Dolores and San Miguel river basins. This makes them among the most heavily mined sites in the West. And it shows.

I’m here with Thurston and Soren Jespersen to take a look at myriad wounds inflicted by the mining industry, most still gaping and oozing with uncovered waste rock, rusty equipment and other detritus decades after they were last active. But this is more than a journey into the past; it’s also a look at what might happen again in the not-so-distant future. A renewed interest in nuclear energy as a low-carbon power source and a desire to source reactor fuel domestically could wake the U.S. uranium industry from its long dormancy and rouse some of the mineral belt mines back into action.

“Here we go again. Are we going to stumble blindly down the same path?” Jespersen, of Colorado Wildlands Project, said earlier in the day, as we examined what looked a tombstone-looking monument marking the internment site of nearly 1 million tons of radioactive tailings from the Naturita Mill. Thurston and Jespersen are both working, in their own way, to prevent that from happening.

The U.S. uranium industry has been on a downward slide since the 1980s. First, the 1979 Three Mile Island incident gave Americans the nuclear power jitters (Chernobyl, in ’86, didn’t help matters). Then, the Cold War ended, allowing the fissionable material in dismantled nuclear warheads to be downgraded to a concentration that could be used as reactor fuel, and opening up Russian and former Soviet republic markets to the world. Uranium prices dropped significantly, gutting the domestic mining industry. Now, at least 95% of all of the uranium used to fuel American reactors is imported from Kazakhstan, Canada, Australia, Russia and other countries.

After the Fukushima disaster, it seemed as if nuclear power would gradually fade away, at least in the U.S. New conventional reactors are simply too expensive to build and low natural gas prices and a flood of new renewables on the power grid threatened to make the existing, aging nuclear fleet obsolete. But as the effects of climate change become more and more apparent, and the sense of urgency around the need to decarbonize the power sector intensifies, climate hawks are giving nuclear power a new look.

The Diablo Canyon nuclear plant outside San Luis Obispo, Calif., for example, is scheduled to shut down in 2025, but now California Gov. Gavin Newsom is leading a push to keep it open longer. His reasoning: The state’s grid doesn’t have the renewable generation capacity yet to replace the big plant, meaning if it were to close now, grid operators would have to rely on carbon-emitting natural gas-fired generation.

Meanwhile, a Bill Gates-backed firm called TerraPower is working to build an advanced nuclear reactor in Kemmerer, Wyo., and Oregon startup NuScale is looking to install a battery of small modular reactors at the Idaho National Laboratory to sell power to small, Western utilities.

Any of these initiatives, on their own, can’t revive the U.S. uranium industry. But this mild resurgence in nuclear power, paired with the fallout (only figurative, we hope) of Russia’s invasion of Ukraine, has caused the price of uranium to double over the last couple of years. If that trend continues – and if the federal government pitches in subsidies for the industry – it might be enough to make U.S. uranium mining economically feasible and spark renewed interest in the Uravan Mineral Belt.

“Mining has to be part of this energy solution,” Thurston says. “The problem is, mining is not just about siting, but also bringing regulations into modern times and the future. It’s about convincing the government it’s not 1872 anymore.”

Thurston has tirelessly worked to bring regulations and regulators out of the 19th century, sometimes by dragging them into court. She was instrumental in the fight to block a proposal to build a uranium mill in the Paradox Valley several years ago, and more recently has forced regulators to revoke long-idled mines’ “temporary cessation” status, clearing the way for them to be cleaned up.

Jespersen is taking a different tack, he explains as we stand next to the confluence of the San Miguel and Dolores rivers, swatting away pesky horse flies. His organization was formed with the aim of achieving landscape level protection for Bureau of Land Management lands on the Colorado Plateau. In this case, they are looking at the Dolores River watershed, specifically the lower, northern end, which manages to be spectacular, remote and industrialized by uranium mining, all at once.

A piece of that is moving forward. In July, Sen. Michael Bennet introduced a bill that would establish a National Conservation Area along the Dolores River from McPhee Dam to the San Miguel County line, just upstream from Bedrock and the Paradox Valley. That would add a layer of protections to a 76-mile stretch of the river corridor, including prohibiting new mining claims. However, it would not stop mining on existing claims or Department of Energy leases, both of which are abundant.

But, thanks to local political opposition, Bennet’s bill leaves out the lower 100 river miles – along with serpentine canyons, slickrock expanses, isolated mesas and the western edge of the Uncompahgre Plateau. Jespersen and Colorado Wildlands Project are looking to up protections on that remaining section, specifically the area from the Dolores River’s confluence with the San Miguel River downstream. During uranium mining times, much of that section of river was dead, thanks to tailings and other waste dumped into the river from the mills and mines. But still other areas remain relatively unmarred and even qualify for wilderness designation.

Then we drive into the heart of the wreckage on a nearby mesa. “This whole formation is basically Swiss cheese,” Thurston says. We go out to a point where we can look out on the landscape and see the web of roads scraped through the piñon, juniper and sagebrush decades ago to give prospectors access to every inch of this vast space. It’s heartbreaking to see, but hopeful, too, as the land is slowly healing. Yet it’s infuriating to think that the wounds may one day be torn open again.

The Land Desk is a newsletter from Jonathan P. Thompson, author of “River of Lost Souls,” “Behind the Slickrock Curtain” and “Sagebrush Empire.” To subscribe, go to: www.landdesk.org