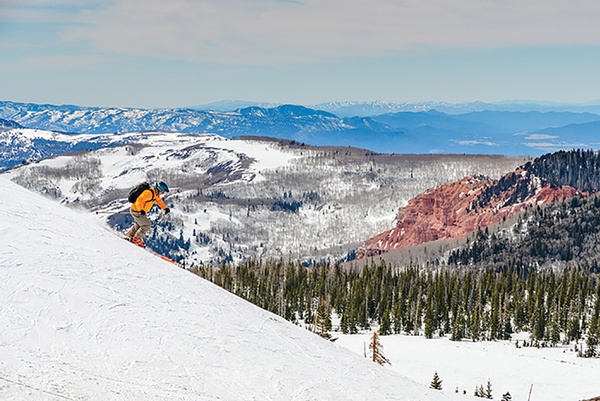 A skier makes his way down a run at southwestern Utah's Brian Head Resort, with Cedar Breaks National Monument in the distance. Purg's parent company, Mountain Capital Partners, has entered an agreement to operate and manage the 620-acre ski area about 40 minutes from Cedar City, Utah./ Courtesy photo

Yet another Southwestern ski area has been added to the Mountain Capital Partners quiver. On Tuesday, MCP announced it has acquired Brian Head Resort, in southwestern Utah. According to a press release, the agreement calls for MCP to “manage and operate” the small resort, located about 40 minutes from Cedar City, Utah.

“We’re proud to welcome Brian Head Resort and its employees to the MCP family,” CEO James Coleman said. “Utah has some of the best powder skiing on earth. Brian Head’s family friendly vibe and proximity to Southern Utah’s famous red cliffs and national parks greatly enhances our portfolio and supports our mission to make skiing and riding more accessible and affordable.”

Sitting at 9,600 feet, Brian Head boasts Utah’s highest base elevation and receives 360 inches of snowfall annually on its two connected mountains, Giant Steps and Navajo. Topping out at 10,970 feet, the resort has 620 acres of ski-able terrain, hike-to chutes, 11 lifts and 71 runs.

The resort and nearby town of the same name are situated between Zion and Bryce national parks. Other regional attractions include Grand Staircase/Escalante and Cedar Breaks national monuments; the town of St. George (11⁄2 hour drive); Las Vegas (3 hours); and Salt Lake City (31⁄2 hours.) It is about seven hours from Los Angeles, Phoenix and Durango.

Founded in 1964, Brian Head’s majority owner and president is currently John Grissinger, who bought the resort in 2012 and has since invested nearly $16.5 million in improvements, including high-speed quads, day lodge facilities and night skiing.

In the summer, Brian Head offers lift-served mountain biking among other activities.

“Passing the torch to MCP was the logical decision to ensure the future viability and growth of the resort and town of Brian Head,” Grissinger said. “They are passionate about the ski industry, share our core values ... and have improved the skier experience at all of their resorts.