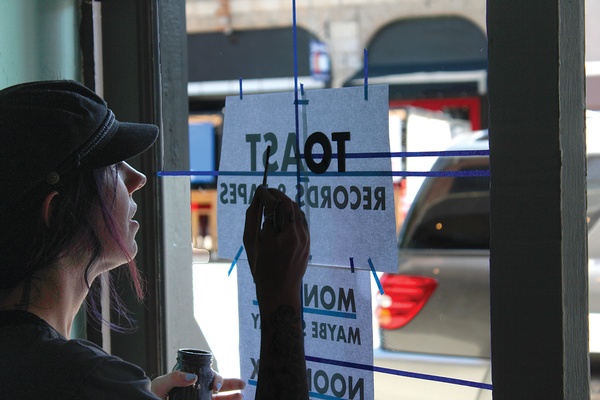 Toast Records & Tapes opened in the 600 block of Main Ave. in August, becoming Durango's first and only record store since Southwest Sound closed in 2018. / Photos by Jonathan Romeo

It seems to me, that as of late, I’ve been complaining an inordinate amount. If you’ve been on the receiving end, I’m truly, mostly, sorry. It isn’t on purpose, and it certainly is not confined to a single topic. That said, it does tend to circle back toward the drastically shifting dynamics in the (no longer) sleepy southwestern town I’ve somewhat surprisingly called home for nearly 20 years.

One of the many tendrils of frustration (along with the complete and utter absurdity surrounding the real estate market, local wage inequity and the incommensurate cost of living, the current maddening state of the pandemic, traveler vs. tourist, and on and on and on) was the absence of a real, proper brick-and-mortar record store. On July 14, 2018, Robert Stapleton and co. shuttered the doors on our beloved Southwest Sound, which had been more than a record store in Durango since 1977.

Like any local record shop, Southwest Sound was a beacon on Main Ave. that served as community hub, meeting place, water and dog treat stop off for many of our favorite furry friends, time killer and wallet lightener. The changes within the music industry over the last decade or so, most of which (in my opinion) can be traced back to the internet & streaming services, have slowly killed off store after store around the country.

Thus began a lament I repeated over and over, to those willing and not so willing to hear me spout some version of, “I don’t think I want to necessarily live in a town without a record store!?”

Thankfully, we can all breathe a communal sigh of relief with the opening of a brand-new record store here in Durango. Josh Bensik has been a genuinely loveable fixture in this town since the mid-90s wearing a variety of hats. Josh was one-time talent buyer and general manager of the Abbey Theatre (now The ACT) and is perhaps known to many, recently, as the gregariously affable (and now former) manager of the newest Bread location downtown.

After 30-plus years of wishing, considering and pondering, Josh and his partner Kyra have made the store a reality. Prior to the pandemic, Josh had been carefully scoping various spaces to potentially open a multiple-purpose storefront. For two-plus months, Bensik has put every bit of free time, sometimes pulling all-nighters, to build the store out from the ground up. On Monday, Aug. 16, Toast Records & Tapes opened at 643 A. Main Ave. in what used to be the old-timey photo store front, Thru The Lens.

Scraping, priming, painting and building the record bins from scratch with the help from friends and family, he appears to be loving every minute of being his own boss and offering up a space that is sure to be the next downtown spot to meet up with friends and fellow music lovers. His optimism and gratitude are infectious. In the short time we hung out, chatting about his new venture, each time someone entered the shop, Josh stopped whatever he was doing, smiled and warmly, genuinely greeted incoming patrons.

“Honestly we’re putting everything we have into this space,” Josh said, beaming with pride. “I mean, we’ll see what happens and I just don’t know. It’s challenging and it’s terrifying, but it’s also so much fun and I’m so happy to get to do it. Its been my dream since I was a kid, and I’m doing it.”

Josh said eventually the space will also feature a functioning bakery and cake shop for Kyra to offer pastries and even some special orders, likely by November. There’s even some space to dish up coffee and espresso for customers hanging out. “Hopefully it gives people yet another reason to come in,” Josh said.

Only a few weeks in, Toast Records & Tapes intends to grow and evolve. Josh  already has plans to build more racks for more records, and he wants to have a used vinyl section, too (most of Toast’s records are new reissues and some of Josh’s personal collection). And, just as important, Josh said, is to be able to hold live in-store performances in the shop. In fact, Toast Records & Tapes hosted its first show in August with Esther Rose and Nathan “Kickin” Schmidt. “It was fantastic, it was perfect…and it never felt crowded or out of hand,” Josh said.

The current selection of albums and tapes (compact discs *can* be special ordered) reflects his own varying tastes, and clearly resonates with his clientele. The latest release from Sturgill Simpson, “The Ballad of Dood & Juanita,” plays softly in the background as purchases from Built to Spill, Wilco, Melvins, and GZA leave the store.

New releases will be made available every Friday and hours are “Monday-Saturday. Maybe Sunday. Noon-Six O’clock. Give er take.” 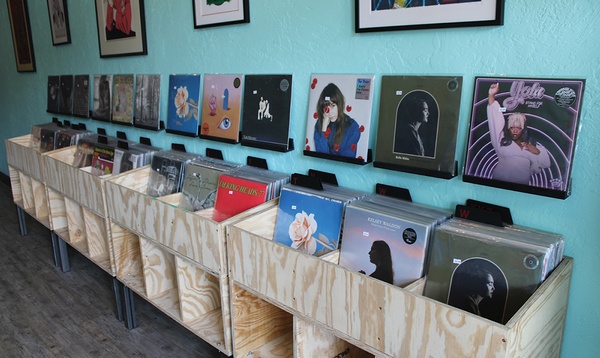 Toast owner Josh Besnik said eventually the space will also feature a bakery and coffee, likely by November. "Hopefully it gives people yet another reason to come in," Josh said.