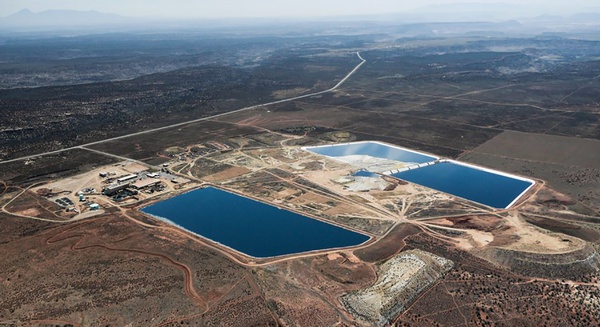 An aerial view of the White Mesa Mill complex. If its application to the State of Utah is approved, the mill could start handling as much as 660 tons of radioactive waste a year from a rare metals processing plant in Estonia. Environmentalists and residents of the nearby Ute Mountain Ute community oppose the idea, saying the mill has already contaminated local air and water.

Energy Fuels Resources, which owns the White Mesa Mill south of Blanding and east of the monument, has applied to the State of Utah to amend its radioactive materials license in order to begin accepting radioactive tailings from a mill in Estonia. Currently, the mill is not allowed to accept waste from outside the United States.

In addition, Energy Fuels is asking for a doubling of its current allotment from a single source, from 5,000 cubic yards a year to 10,000 cubic yards.

White Mesa would process the Estonian waste, which contains about 0.27 percent uranium, extracting the yellow cake and disposing of the rest on site. If the application is approved, White Mesa could process as much as 660 tons of radioactive waste a year.

The Utah Department of Environmental Quality is taking public comment on the license modification through July 10. In its application, Energy Fuels said the Estonian government has ordered the Silmet rare metals processing plant, which produces tantalum and niobium, to cease operations until it can dispose of 2,000 drums of radioactive byproducts. With no licensed facilities accepting such waste in Estonia, the company proposed shipping it to Utah.

The proposed plan is being met with resistance from conservationists as well as residents of the nearby Ute Mountain Ute community of White Mesa. The White Mesa Mill already has a questionable track record among both groups. Twice in the last five years, trucks on their way to mill have spilled radioactive waste on Highway 191. The trucks were owned by Cameco Resources, out of Wyoming. In addition, Energy Fuels has been accused of cozying up to the Trump administration to reduce the size of Bears Ears Monument. In 2017, Andrew Wheeler, now head of the EPA, worked for Energy Fuels and successfully lobbied Trump to shrink the size of the monument in order to allow for more uranium mining.

The mill itself is believed to be the source of toxic and radioactive air pollution as well as contaminated ground water, according to residents of White Mesa, which lies just a few miles away.

“The facility has gone from being the North American continent’s dry, low-level radioactive waste disposal facility of choice ... to now being the world’s radioactive waste dump,” Scott Clow, environmental programs director for the Ute Mountain Ute Tribe, told the Salt Lake Tribune. “That is something the tribe opposes. The tribe does not want these materials to continue to be delivered to their neighborhood, their traditional lands, and stored there forever.”

According to the tribe, groundwater has been contaminated for years because of the uranium mill’s tailings pits; something the state and mill deny.

In January, Ute Mountain leaders sent a letter to the state detailing “overwhelming data” that showed a rise in groundwater contaminants and acidification beneath the mill site. The tribe requested an investigation into the causes of the pollution, which includes rare toxic metals such as beryllium, cadmium, nickel and thallium. The tribe argued these metals are not naturally occurring in the local geology or groundwater, indicating leakage may be occurring.

Others opponents of the plan called into question the state’s decision to reclassify the Estonian material as uranium-bearing “ore,” aka alternate feed, rather than radioactive waste. They also take issue with the White Mesa Mill’s deviation from its original intent, which was to process uranium ore, not process and dispose of radioactive waste. In addition to the Estonian waste, Energy Fuels is also asking to accept “alternate feed” from Union Pacific Railroad’s Moffat Tunnel near Glenwood Springs.

At a May 20 virtual public hearing on the proposal hosted by Utah’s Division of Waste Management and Radiation Control and covered by the SLTRIB, Grand Canyon Trust attorney Aaron Paul argued that calling the material anything but waste is misleading to the public.

“When the company is getting a fee to process alternate feed ... that fee is an obvious signal that what the company is really doing is being paid to operate a waste disposal business,” Paul said. “It’s not worth it for the company to buy that feed and turn it into yellowcake.”

Paul noted that when White Mesa was first licensed in 1979, it was proposed to have a 15-year lifespan processing uranium ore from regional mines.

“The documents surrounding that decision are crystal clear,” Paul said. “... if you lived in the (nearby Ute Mountain Ute community of) White Mesa, in Blanding or Bluff or elsewhere in the region in 1979, you would have thought that by 1994 the trucks going to and from the mill would be gone  that the mill wouldn’t be running.”

The state’s “regulatory blessing” to allow the processing and disposal of radioactive waste at the mill, according to Paul, is a major reason why it has survived for so long despite a depressed domestic uranium market.

Energy Fuels did not respond to questions from the SLTRIB about if and how much money it would receive for processing the waste. Rather, company spokesman Curtis Moore spoke to White Mesa Mill’s “exceptional record of environmental protection” and the benefits of its “alternate feed recycling” program. “In only the past three years, Energy Fuels has recycled enough uranium to replace the amount of coal that would fill over 3,000 miles of coal cars connected end to end. This avoided almost 44.6 million tons of (carbon dioxide) emissions. Last year alone, Energy Fuels recycled enough vanadium to build 4.5 Golden Gate bridges.”

But for the Ute Mountain’s Clow, it’s still too big a price to pay for area residents.

“I think it would be the tribe’s preference that the facility shut down,” Clow said. “But that’s a big ask there. The mill has been there for 38 years now, and that’s a pretty short window of time compared to how long the tribe was there before and how long the tribe is going to be there after the mill, and all of that contamination.”

For details on the Energy Fuels proposal, go to https://tinyurl.com/y96qjzxz. Comments can be emailed to dwmrcpublic@utah.gov with “Public Comment on White Mesa RML Renewal” in the subject line. Written comments can be sent to DWMRC, P.O. Box 144880, Salt Lake City, UT 84114-4850. Comment deadline is Fri., July 10.