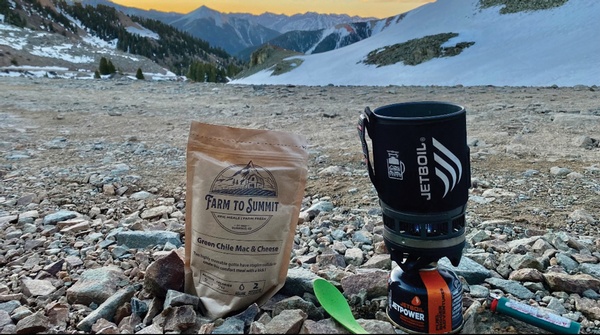 Farm to Summit's Mac n Cheese, made with locally grown produce, including upcycled farm veggies that otherwise would have gone to waste./ Courtesy photo

Whenever I daydream about getting away from my desk, grabbing some solitude and escaping from it all, my mind usually drifts toward trips into the backcountry. Big views, smelly tents, my tired, aching body drifting off to sleep as the sun sets behind a distant butte, a heavy backpack to carry it all. I like the rough and tumble of backpacking but figuring out the perfect food has never been much fun – and honestly, I don’t know anyone who thinks they have backcountry nutrition dialed. Packing lots of calories that can stand up to heat or cold for multiple days is tricky, and the choices are usually heavy foods that take a bunch of preparation or lightweight gut bombs that leave you unsatisfied and certainly not craving your next meal. Creative food at home can be a joy; backpacking meals are often as much a test of endurance as the trip itself.

Louise Barton (known to friends as Lou) watched a situation like this unfold in late 2020 while working with a group of Forest Service colleagues. As an ecologist by training, she was conducting botanical research in the Yellowstone backcountry and noticed some of her coworkers trying different freeze-dried, just-add-water meals and complaining about either bland or extremely salty flavors, tummy rumbling consistencies and generally unpleasant vibes.

“I was on a 14-day fieldwork trip, and the guys I was with just whined about the food the entire time. They were complaining constantly about the taste, how expensive they were and how upset their stomachs were. I felt like there had to be a better way,” she explained. It got Lou wondering if she could create something better, that tasted good and did not leave you feeling like you just suffered through five days of flat oatmeal in a row.

Before even leaving Montana, Lou floated the idea of creating a better backpacking meal with her partner Jane Barden, who grew up farming on her parents’ 150-acre farm in Michigan and has been working on and around farms, local food systems and fine dining for years. It was her commitment to not wasting food that spawned the inspiration for their concept. At the time, Jane was volunteering at Fields to Plate Produce, an organic farm located in the Animas Valley.

“They had a bunch of seconds and damaged vegetables that could not be sold – carrots especially, but even their small crops,” she said.

Lou recalls going out to the farm one day, and there was a bunch of broccoli that couldn’t be sold because it had gotten sunburned but otherwise was fine. “There was nothing wrong with it, the color was just off,” she said.

This was when Lou and Jane saw an opportunity to merge two of their goals: reduce food waste and provide something delicious in the backcountry. And the obvious choice was to start with local produce.

“It just felt like the right thing to do,” Lou said.

By spring 2021, Farm to Summit dehydrated meals was born.

Over time, they heard from more farmers in the area and were able to diversify what combinations of prepackaged meals could be created. “We kind of let the farmers tell us what our ingredients are going to be, which is fun,” Lou said.

I first met Jane and Lou (they recently married and are now Barden together) where many food-related side hustles dip their toes in the water – the Durango Farmers Market. I had just come home from a five-day, 50-mile death march in western Grand Canyon where we were hauling 60-pound packs through gnarly, off-trail terrain. I relied on two “other brands” of freeze-dried foods to save weight and fuel the miles (we were hauling lots of water since drought conditions gave my buddy and I no confidence in finding flowing springs.) Like Lou’s fieldwork experience, my meals were either bland or wince-inducingly salty. Certainly not inspiring to want to go back for seconds. Upon discovering the Farm to Summit booth at the market, with their snappy kraft paper packaging (which Jane described as “omnidegradable” – recyclable, compostable and biodegradable), I loaded up on a few varieties to try at home.

While hasty meals in between endless Zoom calls is not exactly the target market that Jane and Lou envisioned, I’ve had the luxury of trying out a variety of their meals in a focused, non-exhausted setting. The Anasazi Beans and Rice is my favorite so far, with its mixture of locally grown Anasazi and black beans with rice and quinoa as the base (perfect protein, anyone?). It also includes vibrant flavor from tomato, zucchini, onion and celery, with a mild red chile sauce to round it all out. The Thai Red Curry is great as well, and as a total hot-spices sissy, I was able to not heat bomb my tastebuds by ignoring the included Sriracha spice pouch. But if you like that kind of thing, be my guest! Lastly, I gave the Garden Mac and Cheese a whirl, since I thought that if you want to test something that could become a big sticky mass in your stomach, this is probably it. Egg noodles with white cheddar cheese, zucchini, squash, kale, chard, spinach and bell peppers in a light and nicely seasoned sauce. They hit the sweet spot between creamy and not too runny with this one.

They also have been doing a variety of instant drink mixes as well, like Chile Mocha with coconut milk, Double Shot Latte (yes, the caffeine of two shots of espresso!) and a Turmeric Latte with coconut milk. I usually resort to Starbucks VIA for my backcountry coffee hit, so giving these a try is high on my list.

While all these offerings are great, it’s how Farm to Summit takes the next step toward addressing food insecurity and food waste that is most impressive. By working with and sourcing nearly all their produce from local farms – like Beet Street, Long Table Farms, Banga’s and Sol Vista, among others – which might have ended up throwing away seconds or over-harvested veggies, they have created a new element of the local, circular economy of food that didn’t exist before. Jane and Lou told me about the hundreds of pounds of carrots, kale and broccoli that they were able to keep out of the waste stream this year and put into meals that are honestly tasty. And while designed to support serious, athletic endeavors in the backcountry, they are not so heavy as to slow you down.

Layered across everything else is an ethic of giving back even more to community efforts. “If we are getting upcycled produce that would normally be going to food banks, we did not want to take away from them, so we decided to do something different, and more,” Lou said. “We promised to give 2% of sales to a local nonprofit tackling food waste.”

Their first donations of 2021 went to Durango’s Good Food Collective, and they hope the donations will continue to grow as their business gains more traction. While they have been producing their suite of meals at Durango Artisan Foods over the past year, Farm to Summit is planning to open a brick-and-mortar space this March. They are currently remodeling the old Animas Chocolate shop at 2800 Main Ave. to house their production, packaging, shipping and retail space. In the meantime, you can find their meals at several places across town, including Durango Artisan Foods, Durango Natural Foods, Pine Needle Mountaineering and through the Farm to Summit website (www.farmtosummit.com). Backcountry Experience will likely be carrying them again as backpacking season revs up in the spring.

I have another 60-mile Grand Canyon trudge coming up this spring, where I will be putting Farm to Summit meals to the test under real-world, tough conditions. And while I can’t yet predict how that will go, I can say that my deskside testing so far has confirmed what many of us already know – real food, made without a bunch of preservatives, additives and massive amounts of sodium, can taste really good and fuel our bodies for adventures away from our keyboards. And that is something I can get really stoked about. 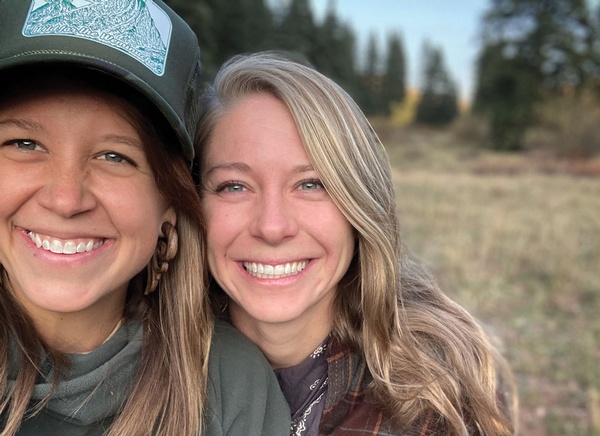