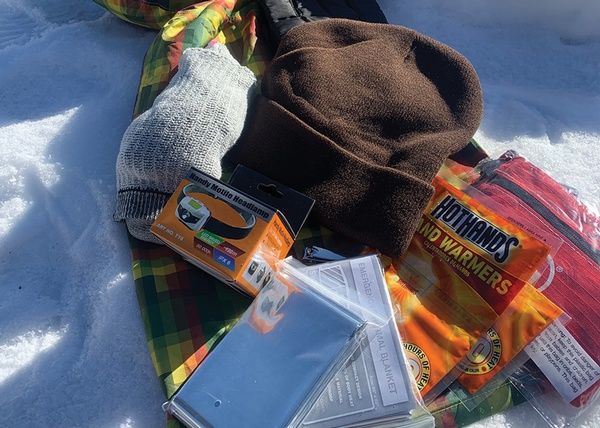 Contents of a winter survival kit. According to Manna, the pandemic has worsened the situation of the area's homeless this winter by taking away the places they seek refuge from the cold, such as Manna and local coffee shops. With the help of the Durango Outdoor Exchange and a community grant, Manna assembled 150 kits to be handed out to those in need./ Courtesy photo

As if trying to survive outside in the winter in Colorado wasn’t hard enough, the pandemic has added to the struggle of Durango’s homeless population. However, an effort by Manna Soup Kitchen, with the help of the Durango Outdoor Exchange, is giving the area’s homeless some essential tools to survive the long, cold days – and nights.

According to Marissa Hunt, resources director for Manna, closures related to the pandemic have taken away what is often homeless people’s only way to warm up during the winter. Whether it’s stopping into a local coffee shop or coming into Manna for a hot meal or coffee, those options no longer exist.

“COVID has raised a lot more barriers for those who are unhoused,” said Hunt. “This has really affected a lot of folks.”

In years past, Manna was open for five hours a day, serving as a warming house and refuge from the cold. But now, with the pandemic, the doors are locked and only staff are allowed inside. Add to that the growing need for Manna’s services – it served 100,000 meals in 2020 compared to the average year of 50,000 – and Hunt knew something needed to be done.

That’s when she got the idea to hand out winter emergency survival kits. The kits include warm socks, gloves, hat, space blanket, headlamp, nail clippers and a hygiene pack. However, when it came to putting the kits together, one crucial piece was missing: a weather-proof bag in which to hold it all (as well as any other essentials, important papers and the like.)

“Dry bags are really expensive, they would’ve taken half our budget,” said Hunt.

That’s where the Durango Outdoor Exchange came in. Over the years, the Outdoor Exchange has partnered with Manna, donating items from the store that don’t sell by the expiration date. Hunt called the store’s Community Outreach and Marketing Coordinator Caroline Williams, who was more than willing to help.

“We are proud to work with Manna and support the work they do in our community,” said Williams.

The store was able to buy 150 drybags at wholesale and sell them to Manna at cost. “That part was huge,” said Hunt.

The kits were paid for by a grant from the locally sourced Equity and Emergency Preparation Fund and assembled by Manna volunteers. Most of the bags were given out during Manna’s Christmas Day dinner, along with coats donated by Open Sky Wilderness, although some survival kits remain. Hunt said the kits are available to anyone who’s unhoused or experiencing a disruption in their living situation. All they have to do is stop by Manna during regular hours. “The doors are locked, but there are always folks here,” she said.

In addition to that, the City of Durango is holding a drive for clean, gently used gloves, scarves and hats as well as new facemasks. Items can be dropped off at City Hall, 949 E. 2nd Ave., through Fri., Jan. 15. The items will be donated to Manna on Mon., Jan. 18, which is MLK Day and a national day of service.

“We’ve been getting a lot of great community support,” said Hunt.

Manna is seeking dedicated community members to participate in its Volunteer Coordination Team. This is a long-term opportunity, ranging from 5-10 hours per week. The position will start out primarily as remote, but will gradually transition to in-person once COVID restrictions loosen. Interested candidates should have:
• Experience as a volunteer
• Effective communication and teamwork skills
• Attention to detail and organizational skills
• Computer skills
Interested? Email Marissa Hunt at services@mannasoupkitchen.com or call 970-385-5095 Ext. 3 for more details.