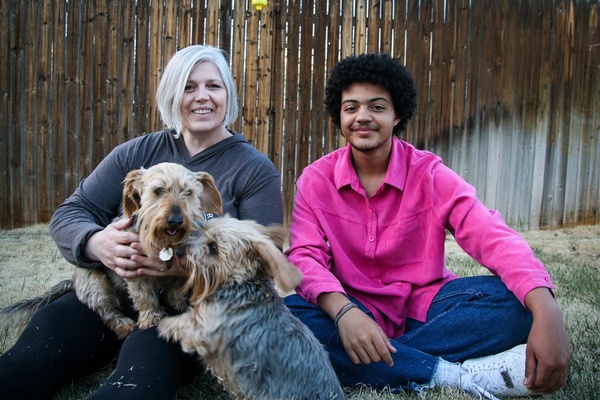 Heather and Tyler White with their dogs, at home in Grand Junction on April 5. Tyler, 17, is trans, and the two are critical of Rep. Lauren Boebert's recent attacks on the Equality Act./Photo by Stina Sieg/CPR

When Republican Congresswoman Lauren Boebert stepped onto the stage at a packed Montrose saloon in March, she electrified the cheering crowd.

“God bless each and every one of you!” she belted out, smiling wide, her signature pistol on her thigh.

It was her first rally since taking office in January, and she hit all the popular points she ran on: guns, God and Trump. She also added something that was not part of her platform until recently: transgender kids – though she never used those words.

“How many girls will lose out on their scholarship because they’re outplayed by a boy?” she asked the hundreds in front of her.

Boebert was decrying the Equality Act, a piece of federal legislation meant to protect LGBTQ people. If passed, it would keep someone from being fired or denied housing just because they’re gay or transgender. It would also allow young trans athletes to compete with the gender they identify with, as opposed to the one assigned to them at birth.

It’s that last part that has become a rallying cry for some Republicans. According to the Human Rights Campaign, more than 100 anti-trans bills have been introduced so far this year in state Legislatures across the country. Many deal with transgender participation in youth sports. Others put restrictions on health care for transgender kids.

Earlier in April, Arkansas became the first state in the nation to ban any kind of gender-affirming medical treatment for minors, including the use of hormone blockers. Arkansas Republican Gov. Asa Hutchinson thought the bill went too far, but the state’s General Assembly overrode his veto.

That was the kind of political climate surrounding Boebert during a press conference in February when she posed the possibility of girls getting their skulls crushed by transgender athletes, and “boys pretending to be girls” leering in locker rooms.

Hearing some of her comments, Tyler White, a soft-spoken 17-year-old in her district, responded simply: “I’m not sure that she knows a lot of what she’s saying.”

He does well in school, runs boys’ track and is trying out for lacrosse. He’s also transgender.

“I don’t know how much research she’s done,” he said. “I would just, like, wish, I could show her my humanity and be, like: ‘We’re just humans.’”

Tyler figured out he was trans at 11 or 12, but didn’t tell his parents for a few years. He planned to run away from home if they did not support him.

His mother, Heather, remembers how just calling him “Tyler” made his face light up.  “And then of course once we started the testosterone, things really, really got better,” she said as her son nodded.

That was at 14, after many consultations with doctors. Boebert has spoken out against that kind of hormone therapy for young people. Tyler’s mother said she would like to ask Boebert why she’s attacking the trans community.

The congresswoman did not respond to several requests for comment for this story. However, former Olympian Eli Bremer, who used to chair the Republican Party in El Paso County, said he agrees with Boebert that the Equality Act could dismantle girls’ sports.

He explained that many parents have told him they’re scared their cisgender daughters, girls who identity with their birth sex, will be forced to compete against trans girls.

And that’s not their only fear.

“What’s going to happen if an individual says, ‘Gee, I can’t make it as a man.’ And the protections aren’t there. So they say, ‘I’ll identify as a woman and get a scholarship and get into a college that way,’” Bremer said. “And my daughter doesn’t get into college because of that.”

There’s no evidence that has happened, but Bremer says it could, and he believes the Equality Act sets the stage for it.

“I think it’s utterly naive to think that if there are loopholes built in, that if people perceive loopholes and perceive some sort of advantage,” he said, “that at some point you won’t have people that want to take advantage of that.”

But what would happen to a man if he pulled off that grift?

That’s what Mara Keisling wants to know. She’s a trans woman and executive director of the National Center for Transgender Equality. She agreed that technically, yes, a man could lie and change his gender identity to try to win a competition. But what would he have accomplished?

“He may have the gold medal, but it would be such a disgrace, it wouldn’t matter,” Keisling contended.

And Keisling asked that if trans athletes are such a threat, why aren’t they dominating now?

But some athletes still worry about what allowing transgender athletes to compete with the gender they identify with will mean for sport. A cisgender female Olympian told CPR News that trans athletes not excelling was just not a good argument for inclusion. She described herself as an ally to the LGBTQ community, but said she was concerned about competing with trans women, something the Olympics already allows at certain testosterone levels. She also felt that such inclusion could hurt the fight for clean sports – competition free from performance-enhancing drugs.

Others think the worry over trans people in the Olympics is overblown, including Kristina, a mom to a young trans child in western Colorado. We’re not using her last name or town to protect her son’s identity.

She explained that, for her, inclusion for transgender athletes at the Olympics is a matter of being “realistic.”

Plus, she went on, sports are supposed to be fun – especially school sports. “And denying anybody the right to participate in a school sport is just wrong,” she said.

But Kristina doesn’t think the fight against the Equality Act is even about sports. As she sees it, when Boebert brings up the possibility of boys attacking girls in locker rooms or bathrooms, she’s stoking fear about trans people.

“I think that’s intentional. She’s doing that to harm the transgender community,” Kristina said. “And if she doesn’t think she is, she’s dead wrong.”

Kristina described how during the Trump Administration she saw more vitriol directed at her family. The animosity flared up again as Boebert and other Republicans focused on trans issues.

“I just would like for her to understand that her words matter, and it will negatively impact my innocent child,” she said.

She believes that if people could just meet her son, they would understand “there’s nothing to be afraid of and that these people are valid.”