What comes around
With new bikes, parts still in short supply, recycling takes on new meaning 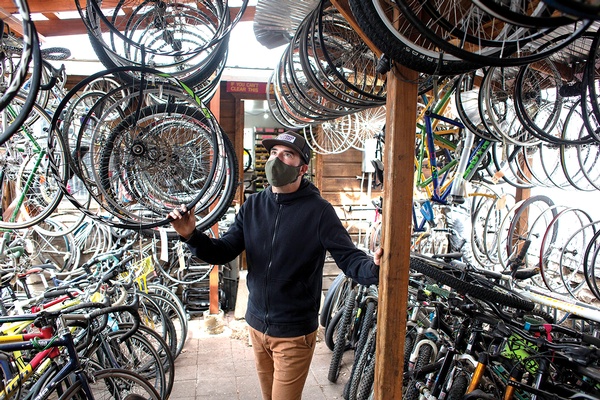 New owner of the Durango Cyclery, Joe Hanrahan, stands in the middle of a used bike gold mine: a collection of old bikes waiting to be given new life. In addition to new bikes – which have been harder to come by in the last year – the Cyclery also sells refurbished bikes for everything from town to trail./Photo by Jennaye Derge

The moment I knew we were no longer dealing with a normal economy – in the dollar and coin sense – was last spring when we found ourselves bartering in toilet paper. But, a year later, those times are past and we no longer need to exchange homemade sourdough for an armful of Charmin. Of course, as toilet paper has once again become plentiful, other items have taken its place in the pandemic scarcity department. Perhaps one shortage felt most acutely by Durangoans is that of our beloved bicycles and, particularly, bicycle parts.

But fear not, intrepid riders. If you cannot find your brand-new dream steed on a local showroom floor, there are other options to get you rolling again.

Locally, bikes have been flying off the shelves faster than you can suck down that packet of GU, according to Gary Provencher, owner of 2nd Ave. Sports. While he sees his dwindling bike supply in a positive light, a testament to this town’s love for bicycles, he also credits it to humanity’s need to freak out.

“(Bicycle buying) has become a frenzy. People think they won’t be able to get a bike in the summer so they need to get one now,” he said. “I think it has a lot to do with the human condition of panic.”

We all do it. We hear something is difficult to find, so we make sure we get a piece of the pie, too. Before we know it, the shelves are empty and producers can’t keep up with the demand. The producers we are speaking of here are bicycle and, more importantly, bicycle parts manufacturers.

The two main component manufacturers in the world, Shimano and Sram, are caught in a high-demand crossfire, trying to speed up production with limited capacity to get us our brake levers in time to go on our ride tomorrow.

“That’s really the biggest issue,” Provencher said. “Shimano and Sram, they’re taxed. I’ve been told they’re working at one and a half times their normal capacity and they still can’t keep up.”

Some bikes, especially specialty bikes, are back-logged for as long as a year, meaning by the time they’re shipped, everyone will have finally used up that 100-pack of hoarded toilet paper.

It’s easy to see the problem when you walk into any bike shop. The racks are a little sparse, but if you’re one of the lucky ones, they’ll have what you’re looking for in stock and ready to ride.

If you’re unlucky though, there is a different route you can try that will likely be more practical, economical and sustainable: buying used.

One of Durango’s longest-standing bike shops, the Durango Cyclery has touted its love for used bicycles since the beginning. Its showroom is an eclectic mix of brand-new bikes and refurbished ones, but it’s the latter that tend to make any true bike geek weak in the knees.

The Cyclery’s newest owner, Joe Hanrahan, says the store’s older recycled bikes catch the eyes of bike lovers because they are timeless and built to last. The sturdy (usually steel) frames are meant to withstand a beating on the trails while also acting as the perfect townie. He also loves how fun it is to see these old bikes with their unique “Cyclery look” out on the streets, more so when they come back into the shop to be re-recycled.

“We see bikes that have been built here in the past, and when people are done with them – when they’re moving, clearing out their garages or are just done riding them – those recycled bikes will make their way back here,” he said.

Hanrahan said the goal for the Cyclery is to keep things that way; to keep accepting donations of old bikes and parts in order to keep them out of landfills and get them back out into the world.

“It feels good to keep bikes on the road.” Hanrahan said. “It’s fun to ride an old bike.”

New or old, bikes are fun, which is probably why so many people still have that old rusty and trusty ride from the ’80s hanging in the garage. But, if you do find one that no longer sparks joy in you, perhaps consider Marie Kondoing it: sell it at the upcoming Durango Devo Bike Swap, May 14-16 at Chapman Hill.

The annual velo swap is back after taking a one-year COVID hiatus. For this local nonprofit, it’s all about the kids and doing good. Just like the Cyclery, Devo sees the importance of recirculating bicycles back into the hands of people who will give them new life.

“That’s a big part of Devo’s foundation: recycle and reuse,” Amy Haggart, Devo coach and director of development, said. “Any bike is fun to be on of course … and you don’t have to have the fanciest, sweetest gear to enjoy mountain biking.”

Haggart is excited for this year’s swap for various reasons including a new option to check in gear online before the event. Swappers also can get online help with pricing their gear or make arrangements for volunteers to pick up gear from their home. Furthermore, if you check in your gear virtually, you don’t have to pay the $1/item tag fee. Have something you just want to give away? They’ll take that, too. Basically, Devo wants to make donating as easy as walking from your bed to your computer for your 9 a.m. Zoom call.

Convenience aside, there are other reasons to take advantage of this year’s Devo swap. Not only will there will be tons of top-notch gear, including parts and stuff from the pros’ closets, if you sell your gear, you get to keep 80 percent of the proceeds. And you can ride easily knowing the other 20 percent goes to support Devo’s bevy of cycling programs for 2- to 18-year-olds. But best of all, maybe you can help spread the love of cycling to some of the less fortunate bike-less masses.

“It’s really hard to find bikes right now, no matter what age or price range, but especially for kiddos who are trying to find a bike,” Haggart said.

And if that doesn’t pull at your heartstrings a little bit, nothing will.

Volunteers are still needed for this year’s swap. If you’d like to help out, sign up at www.durango devo.com/bike-swap/ 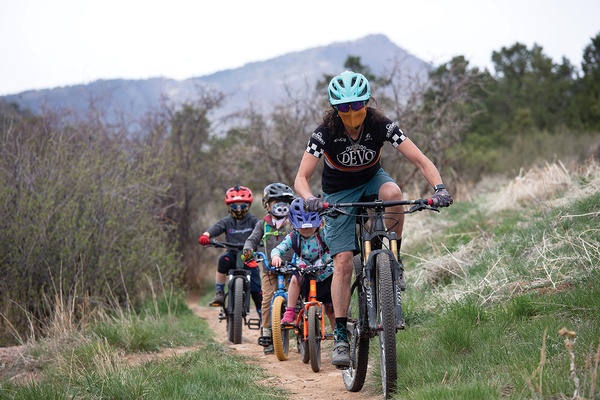 Amy Haggart, director of development and a coach for Devo, leads a group of preschoolers on a ride on the trails behind Smith Park near Fort Lewis College last week. The upcoming Devo Bike Swap is a great way to noy only clean out the garage and make some cash but help kids find bikes, especially given the recent bike shortage. /Photo by Jennaye Derge