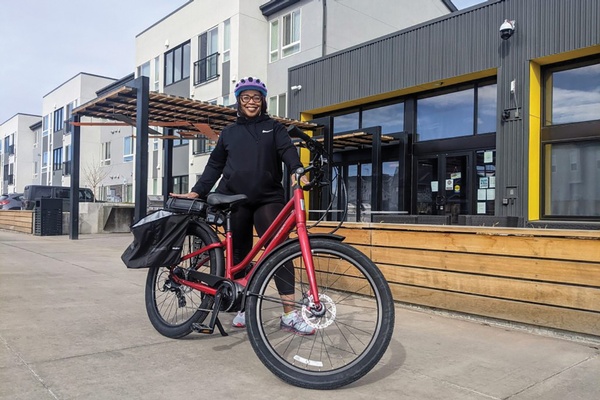 Growing up in Los Angeles, Shalon Bowens remembers looking forward to a new bicycle on Christmas morning. The gift was her ticket away from adults and out into the neighborhood, an excuse “to get outside and do something.”

Bowens, who now lives in Denver, couldn’t help but recall that moment last October when the state of Colorado gave her a brand new, ruby red electronic bike along with a pump, a helmet and a lock – all for free.

Today, Bowens uses her bike to get to her job at It Takes A Village, a sexual health clinic on East Colfax Avenue in Aurora. As a low-income essential worker, she qualified for Colorado’s initial “mini-pilot” program that gave free e-bikes to her and 12 other Denver-area residents.

Colorado is now gearing up for a second giveaway of the Can Do Colorado e-bike program, which will award more than 100 e-bikes to residents. The program is being funded by $560,000 from the Colorado Energy Office, the City of Denver and the Regional Air Quality Council.

Unlike the first round of bike giveaways, individuals can’t apply for a free e-bike. Instead, organizations were required to submit plans to manage the bikes for the benefit of essential workers by the end of January.

Will Toor, director of the Colorado Energy Office, said the pilot program came in response to the pandemic. Last spring, his office started hearing stories about essential workers who had decided to avoid the close confines of buses and light rail and instead use their own cars to get around. RTD later cut some of those routes altogether.

Going forward, Toor thinks e-bikes could play a much larger role as Colorado confronts the threat of climate change. Transportation now accounts for more emissions than any other sector of Colorado’s economy. A lot of those emissions come from Coloradans driving bikeable distances. According to the U.S. Department of Energy, three-fifths of each household’s 2017 car trips, nationwide, were 6 miles or less.

“I think there is significant potential over time for e-bikes to play a really important role in replacing a lot of those short-to-medium distance trips,” Toor said.

The strategy is one of many transportation plans outlined in Colorado’s recent climate change “roadmap,” which spells out how Gov. Jared Polis’ intends to meet emission-reduction goals passed by the legislature in 2019. The plan has received fierce criticism from environmental advocates, who complain the policy lacks specifics and didn’t include enough input from marginalized communities bearing the brunt of climate change.

Toor said equity is really important as Colorado tries to get people out of internal-combustion cars. He noted the Colorado Energy Office supported Xcel Energy’s recent plan to provide $5 million in rebates for low-income electric car buyers. (What Toor didn’t mention is Colorado’s Public Utilities Commission shot down a plan his office submitted for $30 million in rebates. Some PUC members did not like that the plan would have incentivized luxury cars.)

The program also had participants log their activity through a phone app. Todd said the National Renewable Energy Laboratory in Golden is now reviewing the data.

“We know participants are using them a lot and really enjoying them,” Todd said.

That’s certainly the case for Bowens, who said the bike has helped her mental and physical health. The electric assistance can propel her at 20 miles per hour, but she still has the option to pedal along when she wants a workout. Bowens said that’s helped her lose 70 pounds over the last year.