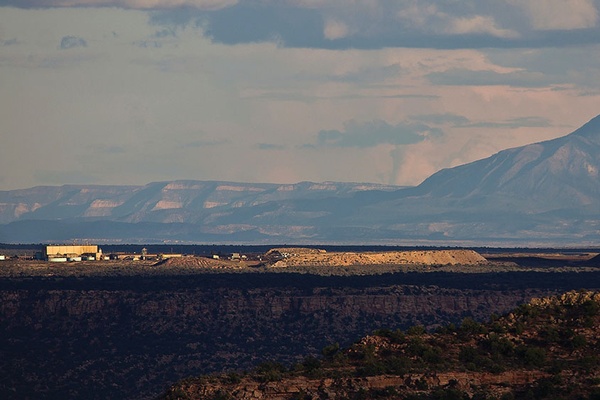 The White Mesa Mill near Blanding, Utah, on the edge of Bears Ears National Monument. A plan to create a uranium waste dump on the edge of Canyonlands National Park was, fortunately, defeated in the early 1980s. However, the White Mesa Mill shows no signs of closing despite an end to uranium mining and milling for the most part. Under the guise of "recycling" spent tailings, the mill makes a pretty penny off charging waste disposal fees to the tune of $6.7 million annually.

THE HISTORY: In the 1980s, a site on the edge of Canyonlands National Park was a main candidate to become the nation’s nuclear waste dump.

THE REPEAT: Over the last few years, Canadian-based company Energy Fuels Resources has been reprocessing nuclear waste from around the world at its White Mesa Mill on the edge of Bears Ears National Monument, making it a de facto nuclear waste dump.

THE CONTEXT: For four decades, America’s nuclear waste was stored and disposed of haphazardly and dangerously. In 1982, Congress passed the Nuclear Waste Policy Act, requiring the Department of Energy to come up with a national repository for spent reactor fuel and other waste. The long list of possible sites, released shortly thereafter, included: Yucca Mountain in Nevada; the Hanford Site in Washington; a couple of sites in Texas; and the Paradox Basin in southeastern Utah.

The Paradox possibilities included the uranium mining hub of Lisbon Valley; Elk Ridge, the home of Bears Ears; the Salt Valley north of Moab; and a place called Gibson Dome, near the junction of Lavender and Davis canyons. Of these, only Gibson Dome made the short list, and an effort to establish America’s nuclear waste dump on Canyonlands’ doorstep commenced.

Many Utahns, having suffered through decades of nuclear fallout from upwind weapons testing and illness due to uranium mining and milling that occurred in their back yards, were appalled. However, the commissioners of San Juan County, Utah, were delighted at the prospect. This was especially true of a former uranium miner named Cal Black, sometimes called the Original Sagebrush Rebel.

The construction of the facility would employ more than 1,000 people, and the operation nearly as many. Black believed that with a national waste dump in place for spent reactor fuel, the nuclear power industry – and therefore San Juan County’s uranium mining industry – would be revived. In an open letter published in the San Juan Record in March 1982, the San Juan County commissioners wrote: “We support such a facility and are opposed to Canyonlands National Park or archaeological sites in the area used to preclude the repository.”

Black then went on to tell a Salt Lake Tribune reporter that tourists would enjoy visiting a nuclear waste dump, just as they reveled in seeing the gargantuan Bingham Canyon open-pit copper mine and the Mormon Temple in heavily polluted Salt Lake City. “If pollution hurt tourism, then Temple Square in the heart of the state’s worst pollution, and Kennecott, one of the worst blights on the environment, wouldn’t be the state’s No. 1 and No. 2 tourist attractions,” he said.

Even with that kind of marketing, Black wasn’t able to enlist much support from outside the county. Former uranium boomtown Moab had by then grasped on to the tourism and recreation economy, motorized and unmotorized alike. Many of its citizens were not too psyched about having a nuke dump on their doorstep and waste-laden trucks or trains rolling through the center of town. It wasn’t just about the radioactivity, either: the facility likely would require its own coal-fired power plant, a rail line and as much as 1.5 million gallons of water per day.

The Sierra Club, Earth First!, no-nuke and national park advocates, launched a campaign, “Don’t Waste Utah,” to rally the public to oppose the plan. Utah Gov. Scott Matheson, a Democrat, went from being skeptical to outright opposed; his Republican successor ended up in opposition, as well.

Black and his colleagues were enraged, and the county staked 2,000 mining claims in the repository study area out of spite. It didn’t work. Opposition to the dump continued to grow, and in 1986 the final environmental assessment was released, relegating the Canyonlands site low down on the list of possibilities, with Yucca Mountain in Nevada rising to the top. The Chernobyl disaster and then the end of the Cold War further diminished Utah’s uranium mining industry. Black, known for wearing a uranium-clasped bolo tie, died of lung cancer in 1990.

Now, more than 30 years later, Black is finally getting his wish for a nuclear waste dump in his home county, though it’s not quite as grand as what he had envisioned.

The White Mesa Mill, located between the Ute Mountain Ute community of White Mesa and Blanding, was constructed in the 1970s, when uranium mining still was going gangbusters. Then the Cold War ended, meaning less uranium for bombs, the nation stopped building nuclear power plants, and globalization opened channels to cheaper uranium from overseas. Slowly, the domestic uranium industry withered, virtually going dormant in the last few years. The White Mesa Mill, however, has hung on – barely, and is now the nation’s only remaining active uranium mill.

Thing is, they aren’t processing uranium, at least in the conventional sense. They are processing “alternate feed materials,” which is to say, they are taking uranium-bearing waste from other facilities, running it through the mill, and then dumping the stuff in their on-site disposal piles and ponds. While the process can recover minute quantities of uranium, the real money comes from providing a disposal site or, as Energy Fuels puts it: “… the generators of the alternate feed materials are willing to pay a recycling fee to the company to process these materials to recover uranium and then dispose of the remaining by-product in the Mill’s licensed tailings cells, rather than directly disposing of the materials at a disposal site.”

According to SEC filings, these recycling fees – i.e. waste disposal fees – made up the bulk of Energy Fuels’ revenue over the past few years, totaling $6.7 million, compared to $66,000 from uranium sales and $3.7 million from vanadium and rare earth sales. That makes it, according to a  report from the Grand Canyon Trust, “America’s cheapest radioactive waste dump.”

Evidence indicates it’s not the safest dump, either. The disposal ponds have leaked, with contaminants detected in groundwater beneath the mill. More recently, aerial photos have shown some of the waste uncovered by water. This same negligence led the EPA to prohibit the mill from processing material originating from Superfund sites, calling the uncovered tailings ponds an “egregious” violation. The EPA also warned that the uncovered material could be emitting approximately 10 times more radon than a covered cell.

Tribal members have fought for decades to close the mill, saying it and its radioactive byproducts are harmful to their health, groundwater and land. However, there are signs the mill is not going away anytime soon. In November, High Country News reported the mill is now looking overseas for waste, with plans to import 2,000 drums of radioactive waste from Estonia.

The Land Desk is a newsletter from Jonathan P. Thompson, longtime journalist and author of River of Lost Souls, Behind the Slickrock Curtain, and Sagebrush Empire. To subscribe, go to: www.landdesk.org.