When the smoke clears
Attentions turn to effects, long and short term, of the 416 Fire 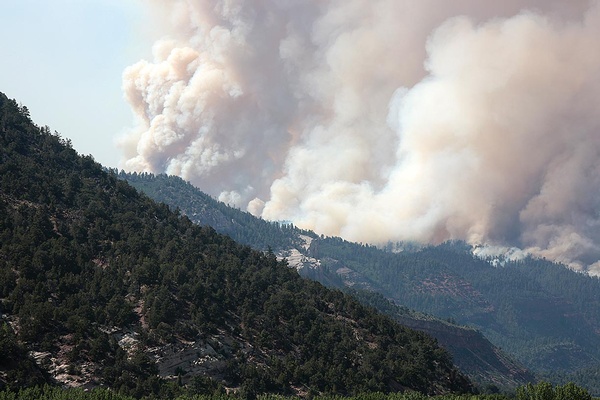 Smoke rises from the 416 Fire in the Hermosa Creek area northwest of Durango. The fire has gobbled up more than 35,000 acres, leaving locals wondering about the aftermath to the ecosystem./Photo by Jennaye Derge

What now? Although firefighters continue to battle the 416 Fire – now about 40 percent contained – it’s certainly a more subdued version of its former self, and attentions are turning to the aftermath.

What happened to the wildlife living around Hermosa Creek? What’s left of the forest? What about flooding, mudslides and water quality?

Jimbo Buickerood, public lands coordinator for the San Juan Citizens Alliance, said residents are starved for information beyond the latest updates on fire activity and statistics.

“People are already wondering, will the forest take care of itself?” he explained.

Buickerood is trying to address some of these questions in a new blog series available on the nonprofit’s website, www.sanjuancitizens.org.

The forest for the trees

In his first post on the 416 Fire Blog Series, titled “What We Know,” Buickerood tackles fire severity and what’s called

the “burn mosaic.” It turns out wildfires do not scorch every inch of the forest as they burn. While some areas were charred by the flames, other spots can remain unscathed. Depending on available fuels and other factors, the forest is left looking more like a patchwork quilt or “mosaic.”

The biggest pieces of the fire severity puzzle, according to Buickerood, are the kinds of vegetation found in the forest and its history. The first blog post, published June 21, offers details on some of the trees and shrubs in the Hermosa Creek area and what conditions they’ve likely faced in the past.

Buickerood said it’s important to look at these things, not through the lens of one person’s lifetime, but through the lifespan of the forest.

Many of the trees growing in Hermosa Creek have been around for hundreds of years. The ponderosa pine has a lifes-pan of about 300 years. The blue spruce can last for 200-plus years, and the Douglas fir is known to last 700 years or more.

In fact, the Hermosa Creek drainage is home to three of the tallest blue spruce trees in the state. Known as champion trees, all three are registered with the American Forests

Register of Big Trees and stand between 156-180 feet tall. Buickerood said the first thing he wants to do, once the fire is out and the area reopens, is find those champion trees and see how they fared. Although, he’s feeling pretty good about their status.

“It’s kind of what they do, living in a fire ecosystem,” he added. “They’ve seen a lot, and they’re probably going to see a lot more.”

The focus for Buickerood in the meantime is on water issues, like debris flows and aquatic life. Those subjects, which he plans to address in future blog posts, are the more immediate concerns – and not just to
locals.

They are also the most critical issues being examined by a unique group of forest service experts called the Burned Area Emergency Response team, or BAER. The team is comprised of experts in several different forest and resource management disciplines, including flooding, erosion, debris flows, mudslides and water quality issues. They’re already on the ground and working on initial assessments.

According to Colorado Parks and Wildlife manager Matt Thorpe, the team will likely make recommendations on how local forest employees can address these threats and minimize the fire’s impact in the short term.

“They have a lot of expertise dealing with this kind of thing,” he explained.

Wondering about the wildlife

For the most part, the terrestrial critters were able to escape the direct impacts of the fire, according to Thorpe. “Their natural instinct is to move out of harm’s way,” he said.

So far, only one animal was found injured or deceased.

Firefighters discovered a bear cub in the forest last week, according to Thorpe, alive but with apparent burns on its paws. Wildlife officials took the cub to a nearby rehab facility, he explained.

Once the injuries heal, the cub will be introduced to an artificial den and allowed to return to the forest. Thorpe said it will likely have a good chance to survive on its own.

It turns out, many animals will actually thrive in the aftermath of the fire. With the blaze burning many small bushes and thick brush, the forest floor is opened up. Travel is easier for wildlife and fresh grasses often spring up.

Thorpe said CPW’s real concerns are with the potential damage to creeks and other fish habitat, which can be impacted in several ways. Burned vegetation can expose waterways to more sunlight than normal, which in turn raises water temperatures. Also, mudslides, ash and other debris can clog and contaminate aquatic habitat.

“The hard part for me is really around the aquatic species,” Buickerood explained. “They’re not sitting ducks, but they are swimming fish.”

Even before the 416 Fire began, stream flows in Hermosa Creek were lower than normal, Buickerood said. This made survival tough for aquatic life. The loss of cover, debris in the

waterways and other issues only make it more challenging. Thorpe said officials with Colorado Parks and Wildlife put out traps during the recent rainstorms to check on the local fish population. The aquatic life didn’t appear to be impacted, but the slow, steady rains made it difficult to accurately gauge.

Things could change with heavy debris flows likely to be triggered during stronger downpours – which could start to arrive in the weeks ahead. Thorpe said they’ll keep an eye on the all the aquatic life in Hermosa Creek and its tributaries as the monsoon season approaches.

“Our concerns have to be with the fisheries and the potential damage to the creeks,” he added.

To get the latest posts from Jimbo Buickerood’s 416 Fire Blog Series, check out www.sanjuancitizens.org. 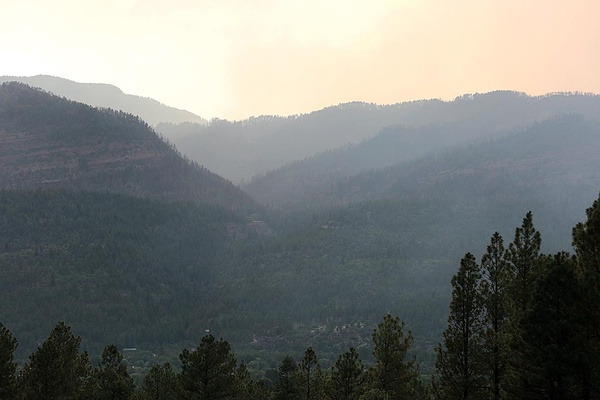 Smoke lingers in the Animas Valley, reminding residents the 416 Fire isn't likely to be extinguished until a good monsoon pattern hits./Photo by Jennaye Derge

Champions of the forest

The Hermosa Creek drainage is home to three of the tallest blue spruce trees in the state. They’re called Champion Trees and registered with the American Forests Register of Big Trees. Heights range from 156-180 feet tall with circumferences up to 155 inches, or about 13 feet around. To find out more, visit www.coloradotrees.org.