Where did everyone go?
Staffing shortages still plaguing Durango businesses 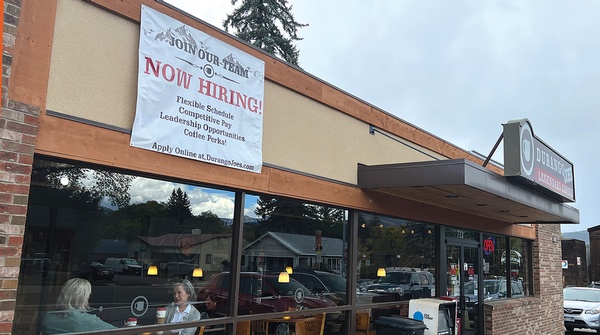 Durango Joe's on College Drive recently posted a large appeal to new hirees. Like many restaurants in town and across the state, the local coffee chain is struggling to stay fully staffed. While many are scratching their heads over the worker shortage, pandemic-caused life reevaluations and high housing prices are partially to blame./ Photo by Missy Votel

In journalism, there’s a bit of an unwritten rule that says don’t put a question in a headline if you can’t answer it.

Well, we here at The Durango Telegraph were never much for playing by the rules, and when we ask, “Where did everyone go?” as it relates to the chronic staffing shortage in town and can’t provide a suitable explanation, it’s because no one seems to have the answer.

Maybe someone with intimate knowledge of the restaurant industry can help? “We used to have a waiting list for people at Cuckoos and the Animas City Theatre, but now we can’t find help for either,” Michelle Redding, co-owner of the longtime establishments, said. “I just don’t understand it.”

It’s no secret, even as we approach the three-year mark of the COVID-19 pandemic, Southwest Colorado is still suffering from extreme staffing shortages across all industries. But with unemployment and government relief money long gone, it’s a legitimate mystery – now that most of the dust has settled, where did all the people who used to work in town actually go?

Of course, there’s the obvious: the cost of living, even before the pandemic, was high in Durango. However, the pandemic and resulting influx of new people to town drove the cost of living and housing/rent through the roof. Many workers were likely pushed out. And, with most new residents either working remotely, retired or second-home owners, the people moving and taking up what little housing inventory is in town don’t contribute to the local labor pool.

But that doesn’t tell the entire story. Staffing shortages remain a national issue, affecting not just desirable mountain towns like Durango, but even less desirable places, like, shall we say, the entire state of Indiana. Even our trusty friend Google seems to come up short on just where all these previous workers have now landed.

“We’re all just scratching our heads,” Joe Lloyd, owner of Durango Joe’s – which has suffered persistent labor shortages – said. “I wish I had the answer.”

Take this job and …

By now, most are familiar with what was deemed “The Great Resignation” – spurred by the pandemic, an unprecedented number of American workers quit their jobs seeking a better work-life balance and pay.

“A lot of people rethought their relationship with work,” Peach said. “A lot of people were asking, ‘Do I stay in Durango and be broke and wait tables? Or do I take a job that can turn into a career?’ Durango is great, but having a career is pretty nice, too.”

However, for restaurants, which were perhaps most acutely impacted, staffing shortages were already starting to rear their ugly heads before the pandemic, said Kris Oyler, co-founder and CEO of Peak Brewing Co., the parent company for Steamworks, El Moro and Homeslice.

The pandemic simply accelerated what was likely on the horizon, Oyler said. And housing remains one of the top suspects. Just this past summer, Steamworks lost five employees who were priced out of town. “I’ve seen it in my own neighborhood – houses sell, and people show up with Texas or Oklahoma license plates, and they’re not contributing to the labor force.”

Indeed, Peach said data shows the labor force participation rate, which tracks the percentage of the population active in labor markets, was at 57% in La Plata County in 2021, compared to the national rate of 62%.

“Remote workers and retirees drive up home prices, and it creates a disconnect with the economy of the town,” he said. “That’s an important piece of the puzzle.”

But people need to work, right? (If not, please let us know). So where did everyone go?

“I’m still trying to figure it out myself; like, what the heck is going on?” said Blaine Bailey, director of In The Weeds, which offers support to the health of restaurant and hospitality staff. “I’m perplexed. I don’t know where everyone is or what they’re doing.”

Of course, there’s no catchall answer, but after speaking to a number of economic researchers and restaurant owners, some theories emerge.

After the pandemic, employers across all industries were in great need of workers, which gave a lot of power to the employees. Now, people could land jobs in positions that were previously above their skill set. So, it’s likely people took advantage and upscaled their careers into more white-collar and office jobs.

“If you’re graduating right now, it’s a fantastic time, because companies are desperate ,and you can basically walk into a position,” Peach said.

Also, the pandemic gave rise to more remote and online work opportunities. As many people know from first-hand experience, the service industry is not exactly a walk in the park, and remote/online work typically pays high wages and offers the convenience of working from home.

So, even with La Plata County’s population continuing to grow, there are still many “now hiring” signs around town.

“There’s still a big base of the sector that’s just missing employees completely, and I’m not entirely sure how you attract those people to return to work or what they’re doing,” Karen Barger, owner of Seasons of Durango, said. “There’s just no rhyme or reason where they went. It’s crazy.”

Housing, of course, is a critical component of the issue. The median home price in La Plata County recently hit $625,000. Rent continues to rise (we’ve all seen the $1,600 a month garage for rent on Facebook). And efforts to add more workforce housing are slow-moving and not enough to meet demand. Peach said a colleague just moved to Grand Junction, fed up with living with five other roommates.

“This place is so stinking expensive,” Peach said. “It’s unreal.”

Durango Joe’s Lloyd said he had 13 Fort Lewis College students lined up to work over the summer. But, when they looked for housing, nothing was affordable, and they all went back home. Between all their Durango locations, Lloyd said the coffee shops are down 15 to 18 employees.

“So I have to hire high school students, and it’s like baby-sitting,” Lloyd said. “Their parents will call in and say their kid is not coming to work, because they’re grounded. I’m like, ‘What do you mean they are grounded?’”

Carly Van Hof Thomson, co-owner at Zia Taqueria and Sage Farm Fresh Eats, said when applicants do apply, some are not necessarily the best candidates. “We don’t just want to fill the jobs with people that may or may not show up, be on time or maintain our culture and standards,” she said. “That actually makes it harder for everyone else.”

Take this for what you will, but Lloyd said throughout Durango Joe’s five locations in New Mexico – where housing prices and rent are far lower – staffing is not an issue. “We get so many applicants down there,” he said. “It’s just not a problem.”

Cutting back, stepping in

Amid all this turmoil, businesses have had to adapt. The easiest change, of course, has been to limit days of operation and hours. Cuckoos, which used to be open seven days a week for lunch and dinner, is now only open five nights a week for dinner. “That’s just all the staff we have,” Redding said.

Many restaurants have raised wages and increased benefits, too. Oyler said anyone who averages 30 hours a week at Peak Brewing locations qualifies for health insurance. Thomson at Zia’s and Sage said PTO was added last year. Colin Carver, co-owner of Carver Brewing, said the restaurant offers flexible scheduling, benefits and competitive wages on top of tips.

“We just really try to make sure they’re happy and want to stay, because if someone leaves, it could create a hole in the staff for a while,” Carver said. (He added that partly because of staffing, Carvers had to close for breakfast, which isn’t likely to return anytime soon.)

Many restaurant owners interviewed for this story have been forced to pick up shifts. Case in point – Lloyd took up the barista status for the first time in almost five years. He even had to take the test he developed years ago to help employees memorize drink recipes and the point-of-sale system.

Though the answer on where workers went remains elusive, one thing is agreed upon by multiple restaurant owners: a sliver of particularly cranky customers have not been graceful as restaurants deal with the domino effects of staff shortages.

Anyone who has worked in the restaurant industry can tell you there’s always the random bad egg on any given night. But restaurant owners interviewed for this story said it’s on a new level and more pronounced.

Customers have lashed out at already stressed staff. People have sent angry emails telling staff they should be ashamed, just because their meal was a little late. And in one instance, a woman even went into the kitchen and started yelling at the cooks (talk about hangry).

“People have a sense of entitlement that’s just unfortunate,” Oyler said. “Customers are going to have to adjust and adapt and realize this is the new norm.”

Part of that new norm is that the cost of going out to eat will likely increase to help offset increasing wages for staff. And in the meantime, show some courtesy. Peach said even though the world has mostly returned to normal, issues such as staffing shortages are still working themselves out.

“It’s death by a million cuts,” Peach said. “It’s no one, big boogie man. It’s all these little things that turned into a really big thing.”

And if you, dear reader, are one of the mystery people we’ve been talking about and want to tell us your story about where you found new work, please reach out to jonathan@durangotelegraph.com.

We promise we won’t put your photo on a milk carton.