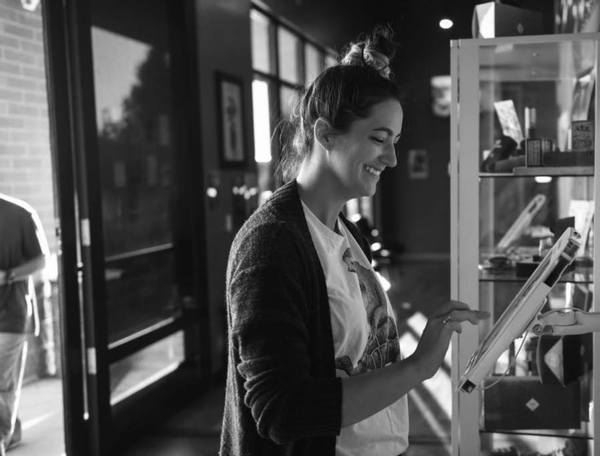 Lindsey Brookbank registers to become a cannabis voter and signs up for a rewards program Oct. 2 at Terrapin Care Station in Aurora. The chain of marijuana retailers is testing a pilot project for the Cannabis Voter Project, which seeks to give more clout to marijuana voters./Photo courtesy of Colorado Public Radio

Will recreational and medical marijuana voters have more political clout in 2020? The Cannabis Voter Project hopes so. The project made inroads identifying voters during the 2018 midterm election and now it’s turning recruitment efforts to pot stores in Colorado and across the country.

“We are neutral players. We are not Democrat or Republican or climate activists or gun activists,” said Andy Bernstein, executive director of New York-based HeadCount, the nonprofit spearheading the effort.

HeadCount has long been engaged in registering voters at concerts, 600,000 so far. With marijuana, the group saw a large chunk of people that “maybe felt that the political system was corrupt or didn’t apply to them or they just wanted to be off the grid.” These cannabis voters aren’t politically monolithic, but experts who track the trends say they tend to be younger and more Democratic.

But even though the growing marijuana industry has a lot at stake in the next election, it doesn’t mean the project intends to join the political trench warfare. Bernstein said the Cannabis Voter Project won’t push marijuana users to vote one way or another, but he does hope it can convince many of them to get off the sidelines. He notes that “if there was ever an example where democracy shapes people’s lives, it’s cannabis.”

Colorado voters experienced that first hand when they legalized recreational marijuana in 2012. All of those new customers are now central to the next phase of the Cannabis Voter Project. The hook? Signup and you’ll earn a discount at a pot shop.

Signees will get updates on federal legislation that impacts the cannabis industry, information on where candidates stand on cannabis issues and – as the 2020 election approaches – reminders on voting and registering.

“It helps because with our daily busy lives, classes, everything, sometimes it’s hard to think about the bigger picture, so it’s nice to have reminders,” 23-year-old Hayley Wilson, a shopper at Terrapin Care Station in Boulder, said.

The dispensary chain is now testing the pilot project to offer customers discounts. The goal is to eventually bring other companies on board here and in other states.

Wilson, a student at Naropa University, who signed up, said she leans Democratic but isn’t happy with either major party. Even though she’s most concerned with the high cost of health care, she said candidates’ records on cannabis also matter.

“I think it definitely affects my vote,” Wilson said. “But I would have to look into other things and make sure I’m picking the best candidate holistically, not just on one issue.”

Unaffiliated voter Megan Lewis is 35 and lives in Denver. She said she’s not always a regular voter.

“I think it’s a great initiative, especially if people are passionate about stuff and not totally into politics like myself, then it will help keep them a little bit more educated as to what’s happening and maybe get them out there voting more.”

On their recent tour, jazz and funk band Lettuce donated a dollar for every ticket sold to help fund the project and California-based CanaCraft has donated $100,000.

Even as Marijuana remains a schedule 1 substance, the House of
Representatives recently passed bipartisan legislation that would
make it easier for licensed cannabis businesses to access banks and
other financial services. The SAFE Banking Act is expected to get a
hearing in the Senate.

“Before, when it was more underground and counter-culture, we didn’t have that voice,” CanaCraft co-founder Dennis Hunter said. “We’re getting their attention now, and it’s just going to make a difference in the coming election that we stay engaged.”

Other top issues include more robust clinical testing, the expungement of records for people in prison for nonviolent marijuana offenses and the STATES Act, sponsored by Sen, Elizabeth Warren, D-Mass., and Sen. Cory Gardner, R-Colo., which would let states create their own marijuana policies without federal interference.

Rick Ridder is a partner at RBI Strategies and worked on passing marijuana legalization in Colorado. He said his data shows marijuana ballot questions can help drive turnout among younger voters. But he’s not sure how many single-issue cannabis voters exist in states where people can buy it recreationally.

“You know, seven years ago it was a single-issue driver for many of them,” Ridder said. “For many voters now that it’s legalized, you’re getting into nuances and when you get into nuances, voters move on to other areas of concern.”

Still, he doesn’t discount the impact the industry can have now that it’s going on the offensive.

Business leaders are starting to play a bigger role in backing candidates who have supported them, even if that’s not the goal of the Cannabis Voter Project. In 2018, marijuana industry workers were mobilized to support Democratic Gov. Jared Polis who has long championed marijuana legalization.

“The cannabis community put together a party committee that expended dollars on reaching out to cannabis voters about Jared Polis,” said Sal Pace, a former Democratic state lawmaker who sits on the board of the Marijuana Policy Project and helped the campaign.

Compared to the last governor’s race, Pace said the industry nearly doubled the turnout rate for marijuana workers in support of Polis.

Unlike the Polis case, the Cannabis Voter Project isn’t spending in races or asking people who sign up to back certain candidates. The end result is unclear, but backers say getting more voters supportive of changes to federal marijuana laws will benefit the industry over the long haul

For more from Colorado Public Radio, go to http://www.cpr.org.