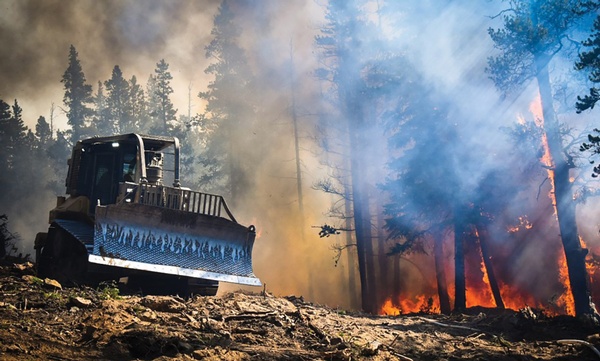 On Sunday morning, firefighter Katrina Mohr awoke to the relief of snow outside her Fort Collins hotel room. The weather meant she could finally take a breath.

Nine days earlier, Mohr’s engine crew was called in from McCall, Idaho, to help with the Cameron Peak Fire west of Fort Collins. She knew the landscape. Mohr grew up in Boulder before spending five years as a seasonal firefighter in the mountains above Colorado’s Front Range.

October was when she’d typically go on offense, burning piles of cut trees to reduce fuels for the year ahead. This year was all defense, she said. Her fire crew logged a 30-hour shift as flames exploded toward populated areas across the state.

Rather than the usual end to Colorado’s fire season, October 2020 has marked an unprecedented acceleration. High winds and dry weather have pushed blazes into the record book, testing firefighting resources and forcing a reassessment of how late into the year the state should brace for fire.

In the last month alone, the Cameron Peak Fire went on a 30,000-acre run to become the largest blaze in state history. The East Troublesome Creek fire started the same day in Grand County. On Oct. 21, wind gusts rocketed the blaze into Rocky Mountain National Park, where it jumped the alpine tundra along the Continental Divide. At more than 190,000 acres, it’s now the second-largest fire in state history.

Jay Lusher, duty officer for the Rocky Mountain Coordination Center, places orders into a national system for fire-fighting resources from outside Colorado. He said the late fires have made the job far harder. “A lot of crews are on a seasonal system, so they’ve just timed out for the year,” he said.

Lusher said Colorado’s need for fire-fighting resources typically peaks in August and September. By October, most of the demand usually shifts to California. While he said Colorado has been able to obtain the critical resources it needs to battle the blazes, it has taken more time to assemble personnel, trucks and aircraft.

Meanwhile, some scientists worry Colorado’s nightmare month isn’t an outlier but a sign of a new normal under climate change. Adam Mahood, a Ph.D. geography student at the University of Colorado Boulder, said research has already shown similar dynamics playing out on a global scale. One study found the greater frequency of hotter, dryer weather meant global fire seasons typically became about 20 percent longer between 1979-2013.

“Colorado is just an extreme case of it being very obvious,” he said.

Recently, Mahood backed up the observation with data. He assembled information from a NASA satellite launched in 2001 to map U.S. wildfires. It showed the state does experience a handful of fires each October, but the blazes rarely combine to exceed a few thousand acres.

Mahood said October 2020 already offers a far different picture. While the satellite data isn’t available yet, he compiled numbers from the federal InciWeb system, which the government uses to keep the public up to date on ongoing fires. In October, three fires burned nearly 160,000 acres in Colorado. That’s 50,000 more acres than all the other Octobers since 2001 – combined.

The pattern fits with Colorado’s recent weather, according to Jennifer Balch, director of the CU Boulder Earth Lab. A combination of record heat and drought dried out forests over the summer. The state’s typical monsoons, which tend to bring precipitation through afternoon thunderstorms, also never materialized.

“We essentially had summer run smack into winter and skipped fall,” she said. “That set the backdrop for very large and very late-burning fires.”

Now, at the end of the month, it appears winter has finally arrived, with as much as 18 inches of snow dropping in the mountains where fires are still burning.

Mohr, the firefighter from Idaho, said the shift in weather couldn’t have come soon enough. “I’m just so glad it’s snowing, doing our work for us,” she said. “Everyone’s just tired.”