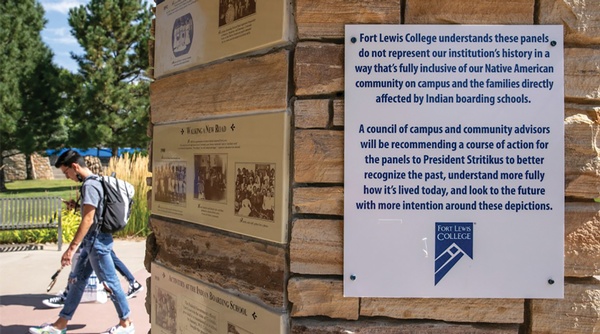 Panels at Fort Lewis College that whitewash the dark past of its history as a boarding school were removed recently./ Photo by Hart Van Denberg/CPR

The origin of Fort Lewis College in Durango is a dark stain on American education and the state of Colorado. The school’s own leaders have said as much.

Once a post-Civil War army fort, the land was converted into a federal, off-reservation Native American Boarding School, which forced tribal students to abandon their cultural identities and adopt western culture. The campus was situated on ancestral land stolen from several Native American tribes.

The process of forced assimilation was often violent. And while there is no current evidence that Fort Lewis had a direct role in student deaths, mass unmarked graves of Indigenous children have been found at former boarding schools across the continent.

Forced assimilation continued at the school from 1891 until the land was transferred to the state in 1911 to become a university. The deal was made on the grounds that Native American students would get free tuition.

Panels in the middle of Fort Lewis College’s campus, right underneath its iconic clock tower, are supposed to depict this history, but the version on display is incomplete. While they include its time as an Indian Boarding School, it portrays the time as peaceful and unproblematic. Photos show indigenous students participating in sports and the marching band.

“The school received high praise for its ‘extremely good literary instruction’ and its ‘excellent work’ in all industrial departments,” one panel said.

But, according to the school’s own Center for Southwest Studies, all aspects of the students’ Native culture, “spoken, written, even gestured,” were strictly forbidden. Records show some students burned down barracks as an act of rebellion against the school.

These days, a third of the college’s population is Indigenous, with 170 tribal nations represented on campus. Indigenous students, activists and leaders have pointed out the panels’ whitewashing of history for years. Last week, the pieces finally came down.

In a ceremony attended by students, tribal leaders and university officials, Fort Lewis President Tom Stritikus described the college’s past as part of a “cultural genocide.”

While the ceremony mourned the college’s past, leaders described it as the beginning of a healing period.

“I think, as we move forward, we can do better,” Melvin J. Baker, Chairman of Southern Ute Indian Tribe, said. “We can always be better tomorrow.”

Skyhawk Nation, a drumming group composed of Indigenous students, played music during the removal. First was a grieving song, which the group sang in the Ponca language to memorialize the students taken from their homes.

“It’s talking to Osages, it’s saying all you Osage, look at your children,” Noah Shadlow, the group’s leader, said. “It’s not just look at them, it’s take care of their every need, watch over them, protect them from all harm.”

Shadlow and company followed with a victory song and an inter-tribal song to celebrate the removal of the panels.

“I look at it as a day of celebration, like correcting the record, I would say,” he said. “Making sure that we all know that this history is real and that it affected real people.”

The college says it hopes to continue its commitment to Indigenous students by accurately retelling its history and expanding its curriculum to reflect the diverse makeup of its students.

Eventually, Fort Lewis will remove the remaining nine panels underneath the clock tower and display them at the Center for Southwest Studies. Fort Lewis’ History Committee hasn’t decided what to do with the space left behind, but members say they won’t move forward without student input.

“One thought is to create some panels, possibly with Indigenous artwork or additional information that we can provide for guests and visitors,” Lee Bitsóí, a Navajo citizen and associate vice president of student affairs at Fort Lewis, said.

Colorado as a whole has been taking steps to address the systemic oppression of Native Americans within the state. In August, Gov. Jared Polis officially ended proclamations that incited the Sand Creek Massacre. But the state still has not made good on its promise to rename Mount Evans and other landmarks named after figures who used their power to oppress Native Americans.

For more from Colorado Public Radio, go to www.cpr.org ?