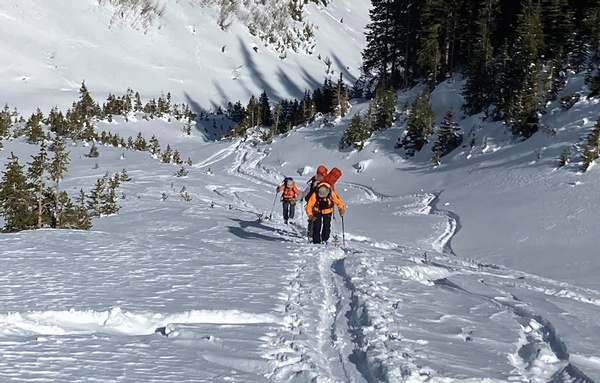 Southwest Colorado search and rescue crews had a harrowing winter this past season after several avalanche fatalities in the backcountry. Recently there's been a push to better fund search and rescue teams, both for missions and to provide mental health services./ San Juan County Search and Rescue courtesy photo

For decades, search and rescue teams in Colorado have been spearheaded largely by volunteers, but with the sheer number of people now in the backcountry in need of help, has the time come to change to a more sustainable model?

“We can’t function the way we’ve been functioning,” La Plata County Sheriff Sean Smith said. “The fact is, the structure that’s been in place was just accepted, but the demand is increasing and we can’t keep it up this way.”

No one in the search and rescue community is necessarily calling for full-time, paid teams of emergency workers – that would be too expensive and not exactly practical, seeing as crews work on an as-needed basis.

But modest compensation, such as expenses for gas and equipment, seem reasonable enough for emergency workers who put their lives on hold – and on the line – to save people lost or injured in the backcountry, Smith said.

In recent weeks, the state of Colorado has acknowledged this funding gap, dedicating more resources to local search and rescue teams. There’s even been a push to address the mental toll the job takes on crews. But long term, many search and rescue officials say a stronger structure needs to be put in place.

“Search and rescue nowadays is a statewide service, and what we put these volunteers in is crazy if you think about it,” Jeff Sparhawk, president of the Colorado Search and Rescue Association, said. “We’re good at running up and down mountains, but asking for money is not our forte.”

In Colorado, county sheriffs are responsible for providing search and rescue capabilities for their jurisdiction, which includes federal and public lands where most people head out for recreation.

But as a sort of unwritten rule, these teams for the most part have been comprised of community volunteers, who dedicate countless hours and thousands of dollars out of their own pockets. About 2,500 volunteers make up an estimated 50 teams across the state. Sparhawk said the average crew member spends around $4,500 a year on expenses and logs about 200-plus hours on calls.

While this model has worked for years, the landscape is changing as record numbers of people head into Colorado’s backcountry, with many of those visitors new to recreating in the outdoors, resulting in more rescues.

Some Colorado counties that used to respond to about 20 calls a year are now receiving more than 200 calls, Sparhawk said. And to ask volunteers to pick up this heavy load, and not offer some sort of compensation, isn’t viable.

“It’s just snowballing, and it’s really tough on volunteers,” Sparhawk said. “We don’t want to get away from the volunteer model, but what we’re facing is not sustainable and we have to figure out a better way to organize this.”

This year, Gov. Jared Polis signed a bill to fund a study on developing a long-term, sustainable structure for search and rescue teams in Colorado. Recommendations are expected in January 2022.

Like most of the state, the early days of search and rescue in La Plata County relied on a network of seasoned outdoorspeople, always at the ready to head into the San Juan Mountains, no matter the time of year or weather conditions.

“There were always people there,” Butch Knowlton, who worked for La Plata County emergency management since the 1970s, before retiring last year, said. “That’s the good thing about this community, people are always willing to help.”

In 1978, efforts were made to formalize what’s known today as La Plata County Search and Rescue. By the following decade, a management team, which included Knowlton, was established to better coordinate missions.

“We built a more cohesive structure of people, and it turned out great,” he said. “It would have been impossible to staff all these people. So you have to sit back and admire the hundreds of people who give up their private lives.”

Dan Bender, who retired in 2017 after nearly 40 years with the Sheriff’s Office, also served on that team in the 1980s. He, too, said La Plata County has always been able to attract team members with specialized skills. But the job’s demanding.

“All these volunteers have to leave their job to go out on a call, and then go at their own expense, with their own vehicles, to help others in need,” he said. “It takes a special person to do that.”

For whatever reasons, La Plata County Search and Rescue hasn’t seen an uptick in missions like other parts of the state, said president Ron Corkish. With an average of about 60 missions annually, this year is on track with 26 missions to date.

Still, the complexity and difficulty of rescues hasn’t changed, and the region has seen the effect of new visitors to the backcountry getting themselves into sticky situations that require emergency help.

Just this past weekend, Corkish said two men from Florida flew to Durango with their mountain bikes, took n Uber to Molas Pass at nearly 11,000 feet in elevation, and then tried to bike through the rugged and remote backcountry to Moab, a more than 200-mile journey over several mountain passes. Just one day and 20 miles into their trip, the men gave up and called search and rescue for help.

“This was their first mountain experience, unprepared, untested and unseasoned as to what a backcountry experience is really like,” he said. “That’s the most egregious we’ve had in a couple of years.”

But for the most part, rescue missions have focused on people with injured knees or ankles, suffering from altitude sickness or lost on the trail. On July 4, three people attempting the waterfall jumps at Cascade Creek also needed help out.

While other teams in Colorado counties are experiencing a lack of volunteers, with many aging and no younger people to take their place, La Plata County, on the other hand, boasts a robust network of about 105 people. In fact, so many people want to volunteer, Corkish said LPCSAR had to close new membership.

“We’ve been blessed,” he said. “But it’s grueling work, and it takes a toll on people in different ways.”

It’s not the old days

Indeed, more attention – and funding – is being directed at providing mental health services to emergency workers who see some of the worst situations, many times involving fatalities and body recoveries.

“Volunteers give a huge amount of time and pay out of pocket, and on top of that, we’re asking them to do ridiculously stressful things,” Sparhawk said. “All of these things add up.”

Mental health services would help train emergency workers to cope with the trauma and stress of the job, to make sure they have the tools available to deal with difficult situations, Sparhawk said. But resources would also go to help those who need services after missions.

“I don’t think SAR is all that different from the rest of society – it used to be, you had a hard call, had a beer and talked about it, and if it was still an issue, you were supposed to suck it up as part of the job,” Sparhawk said. “We’re recognizing that’s not the way to deal with the stress everyone is under.”

The recovery missions took days to complete. Many of the rescue workers in the tight-knit community knew the deceased and were forced to dig through snow and ice for hours on end to recover the bodies.

Jim Donovan, with San Juan County Search and Rescue, was not available for comment this week.  Corkish, however, said it was a brutal experience for his team members, who helped San Juan County SAR on the mission. “We need to figure out a better way to address the mental health piece,” he said.

While maybe not wholly sufficient, search and rescue teams do have some sources of funding at the state level. Anyone who buys a hunting or fishing license in Colorado also pays a 25 cent surcharge that goes to search and rescue operations, but that fee hasn’t been increased since the 1980s.

People can also buy a Colorado Outdoor Recreation Search and Rescue (CORSAR) card for $3 a year, which goes into a fund that helps reimburse teams for mission costs. The fund typically has about $350,000 annually, far below the nearly $1 million requested from the 50 teams in the state.

“It’s a drop in the bucket to what we’re talking about,” Sparhawk said.

LPCSAR receives about $10,000 a year from the CORSAR fund. The team was given an added boost when Smith was elected in 2014 after he started dedicating $10,000 a year for search and rescue training. And, local fundraising efforts, like the Pancake Breakfast during Snowdown help, albeit modestly.

“That’s not nearly enough,” Smith said. “We’re hoping this study will produce something genuine to say, ‘This is the funding we need, and this is the mechanism to get it.’”

To tide LPCSAR over in 2020/21, a time when the team could not hold the Pancake Breakfast because of COVID-19, the state did award $17,000. And search and rescue officials are hopeful a $2.5 million jolt from the new state park Keep Colorado Wild Pass will help with future funding needs.

Here’s a quick breakdown of house and senate bill jargon related to search and rescue.

Senate Bill 21-245, “The Backcountry Search and Rescue Bill,” directs the state to explore future funding models for search and rescue, as well as conduct training for the physical and psychological support of volunteers. House Bill 21-1326 directs about $2.25 million from the American Rescue Plan Act to search and rescue teams.

“Our state’s largely volunteer search and rescue system helps make our outdoors accessible, supports and is supported by local government first responders, and the many difficult situations our backcountry first responders encounter can have deep and lasting personal impacts,” Elizabeth Kosar, a spokeswoman for Polis, said.

Search and recues officials always emphasize people will not be charged for missions, not wanting to discourage people from calling 911 for help. Corkish could only recall four times in more than 30 years someone had been fined, all backcountry skiers who intentionally went out of bounds.

Regardless, larger questions loom for emergency responders as traffic in the backcountry explodes.

What is the value of service of search and rescue in the context of the state’s $60 billion a year outdoor recreation economy? Should funding be more organized at the state level, instead of county by county? Could modest retirement plans for long-serving volunteers be added? And with so many of the rescues involving tourists, should there be some weighted system for out-of-towners to shoulder the costs?

“Across the Western U.S., we’re all facing the same problem, and we’re trying to break new ground to figure this out,” Sparhawk said. “Because we don’t see that trend breaking anytime soon. It seems like people have discovered Colorado and they’re coming here.”