Who's conducting who?
Regulatory authority over D&SNG "at the heart" of Rockwood lawsuit 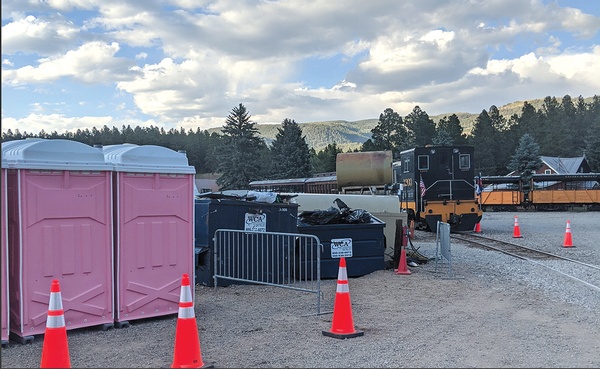 Neighbors in Rockwood have complained about the increased operations at the D&SNG station since 2020, which has brought more noise, trash, litter and fire danger to the area north of Durango./ Courtesy photo

Who has regulatory authority over the historic Durango & Silverton Narrow Gauge Railroad? Well, that’s a loaded question that should receive further clarification as part of a lawsuit between the railroad and La Plata County over the increased use at the Rockwood station north of Durango.

The D&SNG filed the lawsuit May 21 after La Plata County issued the railroad a notice that it may be in violation of the county’s land-use code for ramping up operations at Rockwood in the past year without first going through the proper channels. According to neighbors, using Rockwood as a major point of departure has caused all kinds of problems with traffic, noise, trespassing, litter and increased fire danger.

On Oct. 12, District Judge Suzanne Carlson issue a ruling denying the D&SNG’s request to allow major operations to resume out of Rockwood in the short-term. And, Carlson put the lawsuit and any permanent determinations on hold to await a judgment from Colorado’s Public Utilities Commission (PUC) on just how much jurisdiction it has over the railroad, which was founded in 1881 – just five years after Colorado officially became a state.

“Identifying the proper regulatory agency and the scope of that agency’s jurisdiction is at the heart of this matter,” Judge Carlson wrote in the ruling.

The D&SNG has always had a station at Rockwood, serving as the last stop before entering the remote Animas Canyon, which has no access from roads. The station, however, has never served as a major point of departure for passengers, save for a few outdoor recreationists going into the Weminuche Wilderness or people traveling to the Tall Timbers Resort or Tacoma Power Plant.

In 2020, however, the D&SNG stopped running trains out of its downtown Durango depot because of the COVID-19 pandemic, and instead used Rockwood for three trips a day known as the Cascade Canyon Express. These trips became hugely popular, bringing up to 300 new daily car trips to Rockwood throughout the summer season.

For the unacquainted, the Rockwood station is about 15 miles north of Durango, accessed by turning off Highway 550 on County Road 200, a narrow and winding mountain road that is the only way in and out for the station and residents living in the area.

To accommodate increased use at Rockwood, the D&SNG expanded the parking area to about 100 spots; started charging to park there; and added a tent, concessions, bathrooms and loudspeakers to communicate with riders.

Most residents were agreeable to the D&SNG using Rockwood in the 2020 season, understanding all the hardships the pandemic brought. The railroad, however, continued to use the station in 2021, and that’s when residents and county officials felt deceived, to say the least.

“We did not expect it to roll over in 2021,” County Manager Chuck Stevens said in April. “Could the county have taken a different approach? I don’t know. We did what we did. If it was wrong, I will own that.”

Among the many complaints are the hundreds of cars that now travel the tight road, sometimes speeding and parking on the nonexistent shoulders. Traffic has been known to back up on Highway 550, leading to 30-minute waits to get in and out of the neighborhood. Trains idle at the station and loud speakers blare during operations. And, people are constantly trespassing on private property and some are seen throwing cigarettes on the ground, increasing fire danger.

“It went from a little ghost town to a Disney Land,” Adrienne Aronson, who has lived in Rockwood since 2003, wrote in court filings. “It changed the neighborhood from a quiet neighborhood to a nightmare.” Greg Parady, who also lives in the neighborhood, said his family experienced an emergency and couldn’t get out of the neighborhood because of all the traffic.

Both La Plata County and the Colorado Department of Transportation have made comments that the major change in use at Rockwood likely requires the D&SNG to go through a permit process. The railroad, however, adamantly rejects this notion, arguing the historic railway is a public utility not subject to the same rules as other entities.

Since the D&SNG filed its lawsuit in May, the railroad and La Plata County have been battling it out in the courts. Needless to say, the two sides interpret the law very differently. La Plata County believes the D&SNG is subject to the county land-use code, and as such, should go through the permitting process if it wants to continue major activities out of Rockwood.

The D&SNG, for its part, argues its operations pre-date the county’s codes, and even still, it is only subject to regulatory authority from the PUC. The railroad says operations out of Rockwood are now essential to the company’s success, accounting for millions of dollars in profits. When it shut down Rockwood trips this spring until this matter is settled, 30% of customers chose to cancel rather than rebook a ride out of Durango.

“The County has no authority to stop D&SNG from operating round-trip passenger trains out of Rockwood based on these alleged impacts on nearby residents as it now attempts to do,” the D&SNG wrote in a June 9 court filing.

In September, La Plata County petitioned the PUC to define what agency has what authority in order for the local courts to make a more appropriate ruling. The D&SNG, oddly, opposed this move, almost going so far as to say the PUC in fact does not have authority over the railroad.

Judge Carlson, in granting a pause until the PUC decides, seemed to notice this sentiment, too. “Taking the D&SNG’s argument to its logical conclusion, the County lacks jurisdiction because the PUC has exclusive jurisdiction, but the D&SNG’s activities in this case are too inconsequential for the PUC to consider; therefore the D&SNG may engage in the kinds of activities that brought it before this Court free of any government regulation at all. That cannot be the outcome intended by the General Assembly when it enacted the statutes governing public utilities and their relationship to local land use planning.”

The PUC found the whole situation “alleges sufficient controversy” to take up the case, said spokesman James Cullen. Now, the ongoing dispute enters that agency’s proceedings, the timeline of which is up in the air.

But the final decision may have ramifications on future issues involving regulation of the railroad. The last time regulatory authority over the D&SNG came up was in 2018 amid the 416 Fire when the county enacted fire restrictions that banned the use of coal-fired trains. The D&SNG, at the time, stopped using coal without much pushback, but there was a sense railroad officials didn’t believe the county had the ultimate authority in the matter.

In the meantime, the D&SNG has ceased major operations out of Rockwood. Despite losing those trips, the railroad reported one of its best years on record in 2021. Because the case is active, representatives with D&SNG and La Plata County denied commenting for this story. ?