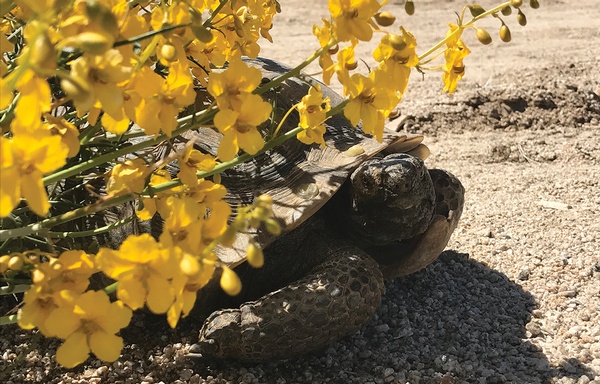 A Mojave Desert Tortoise peeks out from under a shady respite in the Mojave Desert near Las Vegas. Declared a threatened species in 1990, the tortoise has made a comeback but is finding itself increasing at odds with energy and military development in its home habitat./Courtesy Nancy Wiley

We’ve all heard the story about the tortoise and the hare: slow and steady wins the race. But we may not have heard about the race between the desert tortoise and the solar project. With the May 11 approval of the largest solar installation in U.S. history, the Gemini Solar Project in the Mojave Desert outside Las Vegas, the reclusive reptile has suddenly found itself at the center of an unusual debate among environmentalists.

On one side, you have those rooting for renewable energy – or at least those who concede it is the lesser of two evils. The 690-watt plant on BLM land will supply clean energy to 260,000 Las Vegas homes and offset the carbon emission of 83,000 cars. In addition, the project, which will also include battery storage capacity, will create some 2,000 jobs.

“We support these ambitious climate and energy goals that are set in Nevada,” Nature Conservancy Nevada Chapter spokeswoman Jaina Moan said in a press release. “We also recognize that all this energy development is going to have environmental impacts.”

On the other side are those pulling for the Mojave Desert tortoise, which was listed as threatened in 1990 and has – slowly – clawed its way back to a population of 200,000. About 300 tortoises call the 7,100-acre Gemini Project area home. Plans call to remove resident tortoises from the area and then reintroduce them when the solar farm is completed, sometime in 2022. Foes of the project argue that the area is home to a high-density not just of tortoises, who also use it as a main migration route, but numerous other sensitive plants and animals. They also argue that it is unproven whether the repatriated tortoises will survive under the shade of solar panels.

“We don’t think (the Gemini Solar Project) will cause the extinction of the desert tortoise, but it is going to be a fairly big nail in the coffin of the species,” Kevin Emmerich, director of Nevada-based conservation group Basin and Range Watch, told the AP. “We believe solar energy can be an incredibly good thing but if you put it in the wrong location it can be the worst thing in the world for the environment.”

And then, somewhere in the middle, are those on both sides. Like Durangoan Nancy Wiley, who has been on the front lines of the desert tortoise’s “race” to a sustainable population since 2002.

For those who may not be familiar, the Wiley name in Durango is synonymous with whitewater. After a successful whitewater career under the tutelage of father, Milt, Nancy went on to start Four Corners River Sports in the 1980s. However, she sold it in 2002 to brother-in-law Andy Corra, and found herself, well, adrift.

“After selling Four Corners, I didn’t know what I wanted to do,” she said.

That’s when she and late husband, Lars Holbek, learned about the tortoise gig from a river guide friend in Moab. For a few weeks every spring, you got to camp out of your truck in the desert and count tortoises for the Fish and Wildlife Service. And best of all, you got paid. It sounded like a desert/river rat’s dream.

“This was the perfect segue,” she said.4

“We would go out for a few months at a time and make enough money to live off. It fit into our lifestyle perfectly.”

When Lars passed away from pancreatic cancer in 2009, Nancy enlisted sister, Amy, to be her partner. Since then, several friends from Durango have gone on tortoise patrol as well. Amy even moved to Las Vegas to be closer to the work, which she does year round except in the winter. (Interesting tortoise fact no. 1: tortoises hibernate underground, where they spend 90 percent of their waking time as well.)

Since the early days of counting tortoises, Nancy says the work has changed. Now, not only is she doing density studies, but she’s acting as tortoise patrol for developers, including solar projects and the U.S. military, making sure no tortoises end up in the path of construction trucks or equipment. She also works to mitigate loss of tortoise habitat, moving and relocating the animals.

Just last fall, she worked on the expansion of a military base outside Joshua Tree National Park where some 800 juvenile turtles were removed and taken to pens to plump up and have a fighting chance at living to a ripe old age (interesting tortoise fact no. 2: tortoises can live to 80 years old).

“People are getting so good at finding these babies, and statistically, many of them would not make it out in the wild,” she said.

In addition to big truck tires, baby tortoises face threats from predators such as coyotes, kit foxes and ravens, not to mention the threat of a worsening drought. (Interesting tortoise fact No. 3: adult tortoises can go up to a year without food or water, living off their own regurgitation.)

Keeping them in captivity until they’re big enough gives the juveniles a fighting chance – and like Paul Mason used to say, they will release no tortoise before its time. (Interesting tortoise fact No. 4: adult tortoises can grow up to 15 pounds.)

“Even if they’re 1 millimeter too small, they’ll stay in the pens another year,” she said. “They’re getting a really hardened start.”

It is this attention to detail Nancy says gives her hope the tortoise will survive the solar panel onslaught, and whatever else the world throws at it. Technically a biologist working as an independent contractor for firms that are hired to do the tortoise mitigation, she said for the most part, her employers have the utmost integrity. “I feel really good about the people I work for. They are doing the best they can for the tortoise, and I think they’re doing a good job,” she said. “Is relocation perfect? No. Do they all survive? No. Do a lot of them survive? Yes.”

Sure, there are probably better locations for a solar farm, like fallow farm fields or urban rooftops, but Nancy, who owns her own off-the-grid solar abode – sees the importance of cutting ties to fossil fuels. “I am such a strong advocate of solar and moving in that direction,” she said.

In one positive development, the Obama Administration designated solar energy zones throughout the Southwest in an effort to direct development into areas where they would have relatively low environmental impact. Unfortunately, the Gemini site was originally proposed in 2008 and thus, predates the zoning.

So far now, developers will try to work within the parameters of the Endangered Species Act, while folks like Nancy hold them to it. 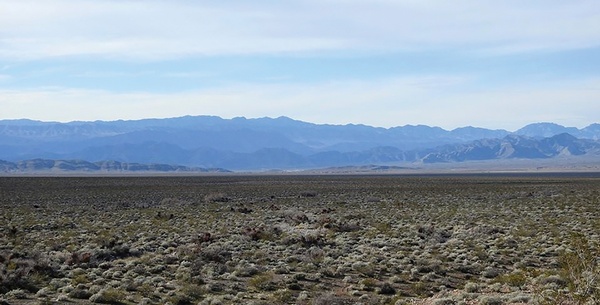 A view of the vast California Wash looking toward the Sheep Range in western Nevada. Most of the area will be developed for the Gemini Solar Project, requiring the relocation of hundreds of threatened tortoises./Basin and Range Watch