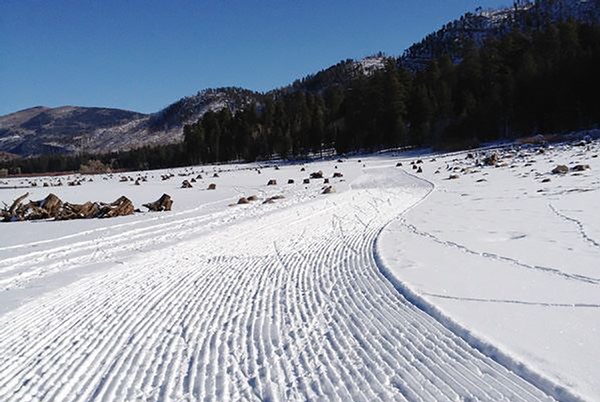 After years of contested jurisdiction, the Forest Service, Vallecito Nordic Club and Pine River Irrigation District have reached an agreement over usage of the ski trails at Vallecito. This year, users will be required to buy either a $5 day pass or $50/season pass from PRID to use the area./Courtesy photo

The snow gods may not be cooperating, but at least all of the entities involved with the Vallecito Nordic trails are.

The Vallecito Nordic Club, U.S. Forest Service and Pine River Irrigation District (PRID) have at long last reached an agreement on a fee structure for the popular – but contested – winter recreation area on the east side of the lake. Under a memorandum of understanding announced this month, users of the winter trail system will now be required to buy a PRID permit, either a day pass for $5 or a season pass for $50.

“We’re about people having a quality recreation experience up there,” PRID superintendent Ken Beck said. “But all the things people depend on, like vault toilets and fishing in the summer, cost money.”

The fee will cover winter use of Bureau of Reclamation lands – particularly “the Beach” ski trails – that are overseen by PRID. Over the years, there has been disagreement over who has jurisdiction of the trail system bordering the lake. Although many of the trails are on Forest Service roads, they cross a checkerboard of PRID lands. PRID has argued on and off for years that winter recreation users should pay for access to its lands, just as fisherpeople and boaters pay to use the area in the summer.

Gary Gianniny, president of the Vallecito Nordic Club, said his group is happy for resolution to the issue, which has closed the Beach for the last few ski seasons.

“We’ve had a challenging relationship with PRID for a long time, we hope this year is a new chapter,” said Gianniny, who’s been on the Vallecito Nordic board for 10 years. “Land ownership up there has been a mess as long as I’ve been with the club.”

So far, Gianniny said PRID has stepped up to be a good partner, allowing the Nordic club to store its equipment at the PRID facilities near the dam and helping with trail preparation. In exchange, Vallecito Nordic is allowing people to buy PRID passes from its website (www.vallecitonordicclub.org.) But the best part by far is the return of the famed Beach skate track.

“The really good news is, we can now start grooming on the Beach – if we get enough snow – the views out there are really spectacular,” said Gianniny.

For its part, Vallecito Nordic, an all-volunteer organization that is responsible for grooming the trails, will keep its same approach to fees.

“People can buy a membership, pay at the trailhead, or if they can’t afford it, they can just ski – although we encourage at least a donation to the club,” he said.

This year, memberships to Vallecito Nordic are $100 for a family or $75 for an individual. Those dues go to things like gas and regular maintenance for the groomers. Also, if people buy a membership by Dec. 22, they’ll be entered into a prize drawing for a new high-end skate package from Pine Needle Mountaineering. All members also get a one-time 20 percent off coupon for Backcountry Experience.

“Backcountry and Pine Needle have been wonderful partners over the years and help us attract new members,” he said.

One change this year is that the popular demo days will be cancelled due to COVID. In addition, the club is requesting a $5 fee for all dogs to help cover the costs of dealing with the dreaded brown klister.

“We are asking people to chip in $5 for dogs because they increase grooming costs,” Gianniny said.

As for enforcement of the PRID pass, Gianniny said that job will fall on PRID.

“We’re encouraging people to get one, but we’re not going to enforce it,” he said.

PRID’s Beck said enforcement strategy has not yet been finalized, but he will convene a meeting among stakeholders and local law enforcement once the MOU is finalized. He said PRID wants to make it a collaborative process.

“We are going to talk about our options and what’s reasonable here,” he said. “We don’t want it to be draconian. It will probably be phased in in stages. We don’t want to just drop the hammer on people.”

More than likely, folks will receive warnings on their windshields if they are not displaying PRID passes. However, he said the main goal is education about PRID and what the money is going toward.

Of course, all of this could be a moot point this year if Ullr fails to hold up his end of the bargain. Gianniny said there is about 7 inches of snow from recent storms, but more is needed before grooming can begin.

“The challenge is, if we go out and groom with just 7 inches, we drag gravel up into the snowpack, and that haunts us all season,” he said.

He said, over the years, snowpack has become increasingly variable at Vallecito and other lower-level ski areas. “This is the face of climate change in our neighborhood,” he said. “Lower elevation skiing is not going to be consistent.” He pointed to last year, which had several weeks of good skiing, and then another one a few years before where the trails were only open for a few weeks.

Nevertheless, he remains optimistic both about the snow and the new arrangement.

“PRID has stepped forward to be a really good partner,” Gianniny said. “We’ll see how it works out. I hope it will be positive.”

What: Vallecito Nordic Club membership fundraiser
When: Now thru Dec. 22
What: Buy a membership for $100/family or $75/individual and be entered into a drawing for a brand spanking new skate ski package donated by Pine Needle. Individual  tickets also can be bought for $5
Where: www.vallecitonordicclub.org