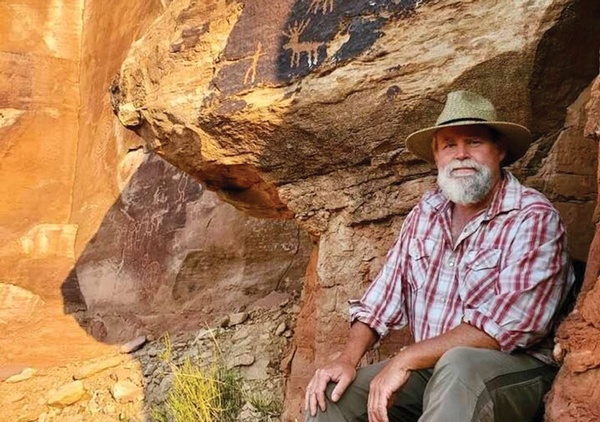 The author Craig Childs doing research for his latest book, "Tracing Time: Seasons of Rock Art on the Colorado Plateau." Childs will be in town for a book-signing on April 6 at the Rochester Secret Garden./ Courtesy photo

Craig Childs, a celebrity author in this corner of the world, returns to Durango on April 6 on his first book tour since, you know, the Before Times. His new book, “Tracing Time: Seasons of Rock Art on the Colorado Plateau,” ventures into the way-before times, considering that rock art has been made in these parts for at least 4,000 years.

But it’s also a book of the present. Rock art is not solely an artifact of the past. Native Americans are still making petroglyphs and pictographs. And that rock art – to the surprise of many an ignorant non-Native person, me included – still communicates with people, is still open to interpretation and is very much alive. And the book itself is very much a product of the present moment.

“I don’t know if this book would have happened if the pandemic hadn’t happened,” Childs said in a phone interview. “The time that I would have been out working on the road was transferred into time spent looking at rock art. Time on the ground. I made more contact with rock art than I made with live human beings over that period.”

The height of the pandemic, as difficult as it was in the lives of many, offered Childs a unique perspective on rock art. He describes how the art itself can reveal whether times were bountiful or rough for the artist. It also offered the opportunity to interact with long-deceased artists in a time when he was isolated from living people. It also offered other chances to connect: time spent camping out with his son, for instance, awaiting the predawn light to draw certain images out of the rock.

“For that moment (of the pandemic), we were bonding under a similar experience,” he said. “We were all experiencing the same bigger impact. A lot of people a thousand years ago would have been in that situation. Communities were tighter. The world was smaller. And people were experiencing (the world) all in the same way.”

“Tracing Time” plays with the duality between shared experience and cultural diversity. In the way that a handprint left on a rock face can evoke a human connection across untold years, readers feel a commonality, and immediacy when Childs describes having to wear masks and Zoom with experts living within closed Pueblo borders. And Childs is our conduit; his trademark empathy and consideration place us on rock ledges with him, and we feel his resonance with people of other times.

He takes us with him, and yet he doesn’t; “Tracing Time” is explicitly not a guide book. It obfuscates the location of certain panels and declines to provide definitions of common rock art depictions. Instead of presenting himself as an expert, Childs arrives as a supplicant, seeking interaction and understanding from this art that endures centuries.

He builds each chapter around a particular motif, such as birthing scenes, spirals, rain and figures with ducks on their heads. He describes the art, of course, as well as the context of the landscape where he encounters it. But the chapters reach beyond the existential fact of rock art to converse with it. Why would someone choose this spot; what does the art convey about the people who made it; what does it say to us, here, now, the people lucky enough to stand before it?

In typical Childs fashion, the questions reach beyond the rock art itself. He asks for guidance from the Native peoples whose relatives, however distant, made the art. He talks with scholars and enthusiasts and enlists other contemporary artists to mine their thoughts. Because he knows that when it comes to rock art, no one person – himself included – can claim authority.

“I am certainly a foreigner here, even though I feel a great belonging in this place, and this is my homeland, where I was born and raised,” said Childs, who lives near Norwood. “But there are people who tie back to being born and raised thousands of years before me in this place, and they are still here. I look around and say, who is still here, and who has relationships with these images? … I think we all see it differently, and I see it as an interloper who’s looking for contact here, who’s trying to understand the land under his feet.”

Childs anticipates questions about what right he, a non-Native person, has to discuss Indigenous rock art in this area. That’s part of why he avoids prescribing definitions to the art he talks about – part of why he always looks outside himself for interpretations, perspectives and context. And also why these written explorations circle so much around his personal experiences, including his own intellectual transformation.

He didn’t expect his basic understanding of rock art to change in the process of assembling the book. He figured he would write some stories, reflect on different perspectives and compile it into a cohesive volume. He thought he knew what rock art was, after spending his whole life around it.

“That wasn’t the case,” he said. “I see it as a source of Native identity in a way that I didn’t before. I thought there would be more of a break between ancient rock art and contemporary Native thinking. But I found that that’s not true, that there are many stories identical to what I’m seeing on the rock art, and those stories are still being told.”

Ultimately, “Tracing Time” shows how rock art maintains the power to move us in ways we do not expect. Don’t come here seeking finality; you will find more questions than answers. But the book leaves you with a humming sense that what rock art means matters less than the fact that it exists, intentionally, in the first place.

“Sometimes it’s enough to see rock art and know people were here for this long, and they imbued this with a deep meaning,” Childs said. “Even if I don’t know what the meaning is, I know there is meaning here.”