You've got (no) mail
Hesperus, Marvel residents plagued by issues at post office 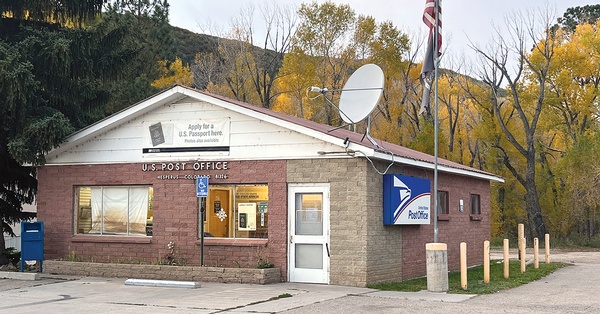 Recent budget cuts and staffing shortages at the United States Postal Service have hit rural post offices, such as the one in Hesperus, particularly hard. Complaints over the situation at Hesperus and the small enclave of Marvel have reached a fevered pitch, however, with residents complaining of lost and returned mail, no delivery and random fees./ Courtesy photo

Much has been made about the U.S. Postal Service’s uncertain future in recent years. But rural communities, which particularly rely on mail as a lifeline to the outside world, are already being impacted.

For a textbook example, look no further than the Southwest Colorado towns of Hesperus and Marvel.

“It’s become a nightmare,” Sharon Daniel, a 40-year Hesperus resident, said. “Sometimes you just don’t know what has happened to your mail.”

Hesperus, 12 miles west of Durango, and the more dispersed community of Marvel, about 15 miles on Highway 140, is around 325 square miles with about 1,400 properties.

Among the sprawling mix of piñon-juniper, sagebrush and agricultural lands, there’s not much in these communities aside from homes, a couple granges and fire stations, and the sweet nothingness of the countryside. The only anchors to speak of are the two post office locations.

In recent years, however, budget cuts and staffing shortages at the USPS across the country have caused mail delivery to be spotty in rural areas, where people rely on mail for medications, livelihoods, social security documents and other critical services. What’s more, limited hours and dysfunction at the two post office locations have further exacerbated the issue, residents say.

“We are extremely concerned about this,” Porter-Norton said. “People out there live an isolated lifestyle, so the mail is really important. Some people in rural areas who have problems with their mail can’t function.”

Four out of five Americans live in cities,  but the USPS has a mandate to deliver to every address, no matter the location. According to a 2020 USPS report, there are 46 million mailboxes in rural areas, with about 30% of all delivery points served by USPS classified as rural.

While the USPS has become a critical and universal service for millions of Americans, it has been plagued with bureaucratic dysfunction and budgetary cuts, leading to higher workloads, chronic turnover rates and crippling staffing shortages. According to the Pew Research Center, from 1999-2019, USPS lost 30% of its employees, falling from 900,000 to 630,000.

Much more could be said about the USPS’s plight, such as the failure to modernize and the rise of private companies, such as UPS, FedEx and Amazon. In 2006, a Republican Congress passed a law requiring the USPS to pay retiree health benefits 75 years in advance, amounting to $120 billion, which was an unprecedented move that critics say was an intentional push to privatize the public service. Additionally, former President Donald Trump (who consistently criticized and blocked funding to the USPS), the pandemic (record package levels on top of employee absences) and cost-cutting Postmaster General Louis DeJoy all fed into the USPS’s woes.

The situation at the USPS is far-reaching and complex, but for the purposes of this story, one thing is clear: when all these issues hamstring the agency, it seems rural areas are always the most acutely impacted. Though people living in rural areas account for only 16% of the U.S. population, nearly 60% of post offices are located in rural areas, places often without internet access that are long drives to town centers.

Years ago, the post office in Marvel was open from about 10 a.m.-4 p.m., six days a week. Now, it’s only open – in theory – an hour a day when the sole post office employee who runs the Hesperus station has time to drive down in the afternoon.

But the system overall has suffered, including carrier service, and it seems everyone has a horror story.

In April 2021, Chris Anderson, who has lived in the area nearly 30 years, said he couldn’t find his tax documents (mailed by FedEx), only to discover a week later the USPS in Hesperus was holding it. He said he was forced to pay USPS $30 to get them back. “They held my taxes hostage a week before even notifying me,” Anderson said. “But you’re at the mercy of them, because you don’t have anywhere else to go.”

Amy Reid, who runs a poultry farm in Hesperus, said she has had countless pieces of mail returned to the sender without notice. She said she’s incurred random fees with no explanation. In one instance, prescription medication for her birds was returned, resulting in the deaths of 200 chicks. “It goes on and on; I couldn’t even add up my financial losses,” Reid said. “And it’s escalating. We never know if we’re going to get our mail or packages.”

Betsy Lovelace, a resident since 2002, said a couple months ago she filed a formal complaint with the USPS after not receiving any mail for several days with no explanation. When she contacted the Hesperus Post Office, she was told she could not come pick up her mail.

“Something has to give, because this is a federal agency, and they can’t hijack people’s mail and tell you that you can’t come get it,” she said. “My packages weren’t necessarily important that time, but we have people out here who get prescriptions through the mail. I’ve heard of documents never delivered.”

Bailed out by Brown

The Durango Telegraph contacted local and state representatives for USPS last week and this week for an interview. No interview was granted, but in a blanket statement that did not address specific issues, a USPS spokesman wrote: “Unfortunately, our current staffing levels have impacted this area, and we have been unable to serve every customer every day. We apologize and pledge to do better.”

With few options, residents have had to adapt.

Lindsay Walters, a resident in the area since 2013, said she now gets important mail sent to her mother’s house in Durango. “I have to drive all the way to Durango, but at least I get it, and it doesn’t get returned to the sender,” she said. “It’s just frustrating that over 10 years, nothing has been done, and it just gets worse.”

Kimberly Archut now uses UPS for sensitive packages. “I don’t have important things shipped to me by the USPS,” she said. “(As a former USPS employee), it doesn’t surprise me that my neighbors are being tormented.” Daniel, too, said: “I just finally got to the point where I don’t use USPS anymore.”

Eleven-year resident Chris Conrad said even when the Marvel Post Office is open, services are unreliable. When the internet is down, locals can’t mail a package or use a credit card. Stamps are always out of stock. And she, too, went days without mail.

“I had my own business that required shipping on a regular basis,” Conrad said. “The uncertainty and unreliability of the postal facilities was a factor in me giving up and closing my business.”

(According to multiple residents interviewed for this story, complaints have been filed against the Hesperus Post Office employee for supposed wrongdoing, allegedly charging random fees and acts of retaliation, such as losing mail or returning it to the sender. Porter-Norton said the accusations are extremely concerning, but not proven and need to be looked into.)

Help on the way?

After years of dysfunction, Hesperus and Marvel residents are finally being heard by higher ups.

“Our regional staff has heard concerns about the mail operations and service at the Hesperus and Marvel Post Offices and submitted a formal inquiry with the Colorado/Wyoming District Office asking that they look into the matter,” Bennet’s spokeswoman Olivia Bercow said.

Robert Hedges, a 16-year resident, said he went three days without mail. In another instance, a mail carrier delivered a water heater and placed it in a mud puddle (captured on camera). Then, he found a package containing awards and certificates he was supposed to give to National Coast Guard auxiliary members on the side of a road in a snowbank. “So I filed a complaint all the way to the Inspector General’s Office against the Hesperus Post Office,” he said. “But nothing ever happens.”

Brad Blake, a former La Plata County commissioner who is running for reelection, has heard much of the same. “I’ve heard dozens of horror stories,” he said. “And I feel like it’s a health, safety and welfare issue. It’s just been a disaster out there for quite a while, and now it’s just an urgent cause.”

Some help may be on the way. In a rare display of bipartisanship, Congress in March passed a $50 billion financial relief package, which was signed by President Joe Biden in April. “We need this money to be used and deployed immediately,” Porter-Norton said.

But for residents in western La Plata County, when that money could arrive, if at all, is anyone’s guess. Conrad said she heard through the local grapevine there’s an effort afoot to close the Marvel Post Office. And she questioned whether the poor service at the Hesperus and Marvel post offices is because of issues locally or at the federal level.

“You know, we’ve always been the red-haired stepchild out here getting the crumbs,” she said. “That is, if they even think of us at all.”