Zany times
Artist draws on past experience, pandemic and presidents for funny pages like no other 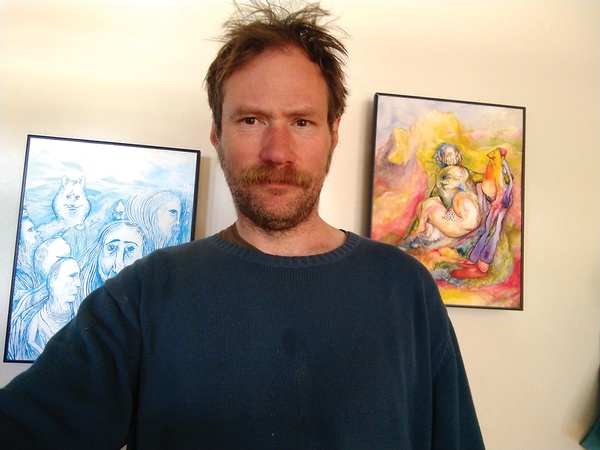 Dan Groth poses for a selfie with some of his latest artwork, originally destined for his upcoming Studio & show, "Insect Footprints." However, due to COVID, the show is being postponed until next spring. However, Groth is moving ahead with selling a newspaper he had printed for the show, the Funny Pages, which will contain Groths' signature offbeat cartoons, short stories and, yes, activity pages./ Courtesy photo

There’s a saying, or at least there should be: if you want to see perfectly good plans laid to waste, make them during a pandemic, and on Friday the 13th.

Local artist Dan Groth, who was to open his first solo show in three years at Studio & this Friday, learned this the hard way. As the inevitable third wave of COVID surged, and clampdowns on private and public gatherings ensued, his plans for a small socially distanced opening and casual parking lot gathering evaporated.

“The consensus for me and everyone else at the gallery was that having an opening would be irresponsible – and bad for me in showing my art show that I’ve worked so hard on,” a disappointed Groth said Tuesday evening. “So we’ve decided to postpone the show until sometime in the spring.”

Groth, who had been on the Studio & schedule for a year, was planning to debut a slew of new works in his show, “Insect Footprints: An Accumulation of Events,” as well as a small newspaper, The Funny Pages,  he had specially printed for the occasion. Although fans will have to wait until the cloud of COVID lifts in the spring (hopefully) to see Dan’s works, there is a silver lining. Or in this case, a paper one.

See, Groth had 1,000 copies of his paper printed to hand out during the show’s weeklong run. With the paper already done, he plans to sell copies at Studio & (1027 Main Ave.) for a small fee to help recoup his costs and the losses from not having the show. 4

“I’m hoping a lot of people buy them and maybe they’ll have favorites, which they’ll want to buy the original of,” he said. “Damn COVID indeed ... but I saw this coming honestly. Numbers have been sky high, and I was prepared.”

The paper was done with layout help from local graphic artist Emily Ciszek. As expected, it contains a mix of Groth’s bizarro cartoon panels, from “Chaos Lord” to “Minnestoa Husband” all bearing his signature  made-up names (Maggie Jazzsuit or Gregor Hamculture, anyone?) There is also a short-ish story and an activity page, complete with a “spot the differences” and connect-the-dots. There’s no doubt the paper will offer hours of quarantine enjoyment not to mention preponderance on the deeper meaning of such topics as talking elephants and elitist sharks.

While a newspaper from Groth, who is better known for his trippy human-creature pen and ink drawings and his equally trippy “Horse Show” on KDUR, may seem far-fetched, rest assured. He is a man of many artistic talents.

“I’ve done some newspaper stuff,” he said. “I drew cartoons for newspapers in high school and college. Some were good; some weren’t. I tried to have a punch line.”

Perhaps his most notable contribution was “Adventures With Satan,” a comic strip that surely raised eyebrows and solicited a few extra Hail Marys at Luther College, the private Lutheran college he attended in Iowa. (It also makes a rare re-appearance in The Funny Pages.) “It was sort of a satire on evil,” he said. “Satan would wear a sweater and things like that.”

Then, in the early 2000s, he drew a comic strip called “Zany Times” for the short-lived Voices Be Heard publication in Durango. And, he has even penned words for this very publication over the years.

Groth said most of the material in the paper was conceived in pandemic isolation, including the drawing that started it all – a hammer hitting a finger, leaving it in flat, smashed cartoonish glory. He drew it out of frustration, isolation and uncertainty after attending a show for Studio & founder Tim Kapustka last March. A show incidentally covered by this paper almost eight months ago to the day, right on the eve of the first shutdown.

“I guess the whole idea of ‘social distancing’ and people having to stay apart fed into some insecurities,” he said of the inspiration behind the drawing. “Everyone’s lives were upended. I don’t know what it would be like if this pandemic didn’t happen.”

In addition, the paper drew upon other events, including the election and the waning days of the Trump reign. “Some of it got kind of dark, with Trump especially,” he admitted.

But Groth himself warned not to read too much into all of it, referring to the panels, for the most part, as “nonsense” cartoons. “All this artistic jargon is just a way to justify me making a bunch of weirdo cartoons, which I personally find to be quite funny,” he said in his “word from the author.”

But then again, there’s nothing wrong with a little dark humor, especially as we head into the dark days of winter. And while Groth said he was looking forward to the show as “one last blast of attention” before several more weeks of solitary confinement, he notes, “we’ve all gotten used to it by now.” And what better way to forget about the world than losing oneself in one’s art?

“I’m going to keep making art over the winter as a release,” he said. “And at least I can relax for the first time in weeks.”

For more of Groth’s art, go to www.dangroth.com. 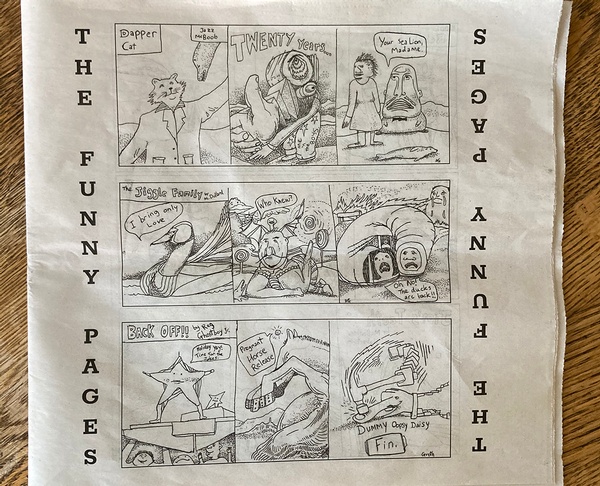 Dan Groth's solo show, "Insect Footprints," sadly had to be postponed till next spring due to COVID. However, fans can still get their fill with Groth's Funny Pages, a 16-page newspaper full of original comics, short stories and "activities."