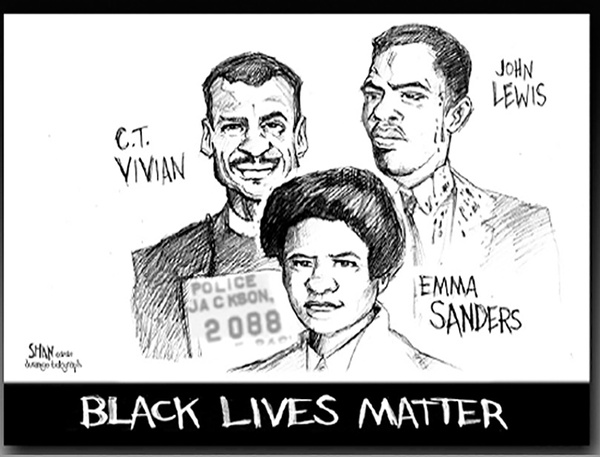 I wrote these words in my round-up last year: “At the open­ing of 2020, Durango is more unified and aware of the chal­lenges we face than it was ten years ago... The county itself, while more expensive than ever, is also much more diverse, progressive and woke, in agreement with Colorado’s statewide skew to the bright blue.”

Wow, was I wrong.

As a white guy, that was my lived experience. But as 2020 unfolded, we all came to see how screwy that assessment was. In May, a Black Lives Matter march in Durango and sub­sequent rallies in Buckley Park were met with increasingly vile counter-protests which apparently materialized out of no­where.

Except of course, they didn’t. Such hatred and anger were here all the time, as every person of color in Durango could testify to, and has, over and over. From the 30-foot Chief sign to a complete lack of diversity in our elected officials, systemic discrimina­tion is as rampant here as anywhere else in the country.

This is nothing new. White coloni­zation of the San Juan Basin began with gold miners trespassing into the San Juans, continued with trea­ty violations and culminated in the Brunot Agreement of 1873 which al­lowed “legal” mining in the heart of a region many tribes still consider their homeland. The ensuing gold rush is the main reason Durango exists now.

This was followed by Native chil­dren being forcibly stripped of their culture, homes and families in board­ing schools and workhouses well into the 20th century. As Native res­ervations melted under the twin onslaughts of capitalism and mani­fest destiny, the Ku Klux Klan gained in power. In 1924, a 6-million member strong Klan held a massive march through Washington, D.C., and ran their own candidate for president.

Bayfield and Durango were regional hubs for the KKK. In 1925, they burned a 125-foot high cross on the top of Smelter Mountain, and marched in local parades, in­veighing against Jews, Catholics and Latinx. Though the overt, fascistic racism of the Klan died down after the 1960s, it never died out. “Indian rolling,” a horrific term for hate crimes against Natives, was coined in 1974 after three Dine’ were beaten to death and mutilated in Farmington by white teens. The culprits were then sent to “reform school” as punishment.

Readers might think, “well, that was in the past.”

But it’s not. Still happens regularly. Sit with that.

And this is the point of diving into the sewer of U.S. race relations. It’s undeniable that the ascension of Donald Trump gave racists of all stripes a hall pass to act up, but it also exposed a profoundly disturbing truth at the heart of the U.S. experiment in democracy: we may never be able to realize the goals expressed at the founding – those of liberty, justice and equality for all. The promise was a lie for everyone but rich white men in 1776; and after 244 years of working the problem, it is still a lie now.

Is it fair to expect tribal peoples whose land and children were stolen, culture raped and population exterminated to ever enjoy citizenship in the country that did and con­tinues to do it? Is it rational to expect Black people whose ancestors were enslaved, exploited and lynched to ever feel they matter in a society whose power bases are still 82-100 percent dominated by whites? The viability of these United States revolves around the answer to these questions.

I was raised to believe that with enough work, the U.S. could actually become a place that lived up to its promises. But 2020 has shown us that we are nowhere near that. Not because it’s impossible to achieve, but because people on both the right and left don’t want to achieve it. They don’t feel the project will ever be salvageable.

Native peoples say they don’t want reparations. They want their land back. Will the U.S. ever cede huge swaths back to them? Black folks say they don’t just want money, they want power. Will Congress or Wall Street ever look as diverse as our country? By 2045 or earlier, whites will become a majority minority in the U.S. Will a country so steeped in white supremacy ever be able to share common val­ues? I mean, we can’t even agree on wearing masks in the face of an airborne viral pandemic. The powerful may simply prefer to burn it all down. Such a fracture, combined with imminent climate change chaos, is an endgame for the human race.

So. If you’ve read this far, you’ve got a strong stomach. I’m sorry to add to your indigestion. After this hellish year, perhaps I should have focused on the positive. A vaccine was created in record time. We may soon be able to hug each other again. Yes, I could have written about those things. But to do so would be malpractice.

Over the last 19 years of commenting on our cul­ture, I’ve been wrong and blind many times. See above. But it seems to me the United States is coming rapidly to a point of inflection. Collapse is not inevitable, but it is certainly not impossible. Examples of failed nations abound in human history. We are not magically exempt.

As human beings, we often refuse to act until the “claws” are in our face when confronted by existen­tial yet slow-moving problems. It’s clear the United States will change dramatically in the next 20 years. As human beings, we must find it in ourselves to steer this change toward sustainable, inclusive justice and environmental rationalism.

What I wrote last year – that our region is much more progressive politically – is true. But that’s not enough. No administration, no matter how historic, can fix us alone. In 2021, instead of resolving to work on your gut, butt, or climb another fourteener, I suggest a resolution to become a better human being. Resolve to act when necessary but more importantly, shut up and listen. I have a particularly hard time with that one. Most guys, (especially white guys), do. But until we agree on what the problems are, we’ll never be able to find the solutions. Solutions found one at a time by ordinary people, every day, 24/7.