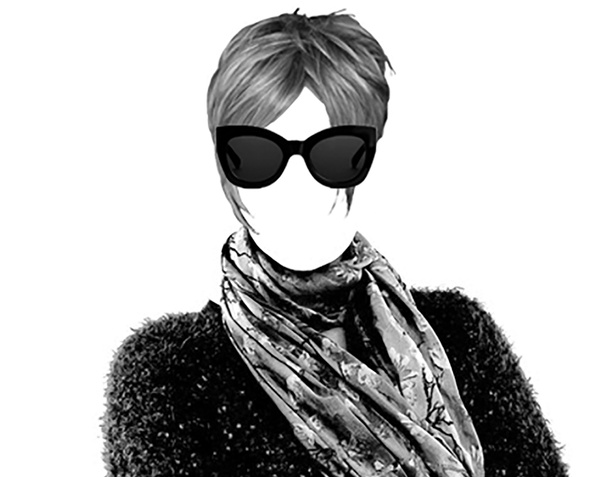 Donna Hewett - 08/27/2020
I’m a Karen’s Karen. (It’s not what you think.) I’m not the epitome of a Karen, but my mother and all three of her sisters are the very manifestation.
It started with the queen of all Karens, my grandmother Sara. Secretary to the president of the U.S. Geological Association from the 1950s-70s, she dressed in heels and business skirts. Tall, the only female deacon at the Presbyterian church, as well as a founding choir member, she was head of the local Rock Hounds group and the most treasured volunteer at the hospital.
A girl who had been orphaned at age 7, her diction and posture were perfection, as was her penmanship. She had a mind for numbers, and did all of her son-in-laws’ tax returns each year (just to watch them squirm). Sara, the Scrabble and Yahtzee champ, though a teetotaler, had a singular desire: to be served hand and foot at fine dining establishments.
Occasionally she’d take us kids. We’d make a point to treat the waitress like an earth angel, until – eyes averted – the trembling girl arrived finally, with the dreaded check. A very sharp pencil was pulled from her purse, and my grandmother would proceed to redo the math very fast. It was always a few cents off. Then she’d wait, and I can see her now, with her fork, calmly fishing ice cubes from her water glass to re-freshen her glass of milk, until the poor girl came back for her tongue lashing. It was an embarrassment.
She lived to target dear, darling, thin waitresses, but also any man in a uniform was given short shrift. And if you had a strong accent hailing from Texas, well, stand back.
At that time, obnoxious and aggressive women were generally referred to by various terms of female genitalia, concordant with my father’s language. My little brother and I might have been tempted to call her a bossyboots if we had the nerve. We didn’t, because, like the Karens of today, she demanded respect.
My grandmother had a certain, big-breasted dignity that was lost on her own daughters – my good-looking, good-time-loving aunts, who dyed their hair and smoked cigarettes and drank beer before going “out.”
The eldest, my Aunt Phyllis, always had to be the right one – about everything. I remember one hot day at the flea market. She reprimanded an older man with a lifeless-looking dog beneath his table, about the need to always bring WATER for our PET ANIMALS, because they can’t get up and get it THEMSELVES. The old man said nothing, but revealed a huge bottle of ICE water from beneath a blanket. That shut her trap PDQ.
The middle girl, Aunt Lois, had the audacity to bully anyone smoking about their bad habit, though she was very casual about being 300 pounds overweight. My mother, Norma Jean, is the baby. This girl has been known to pick up the phone to call the mayor’s office, like he’s an over-protected friend who must be reminded of the awful fireworks in this town, or the trash pick-up problem on certain streets. She had the editor of our daily newspaper on speed dial to admonish him regularly for misspellings and typos. Forty years ago, she proudly learned how to speak Navajo, but the natives still wince when she cuts her tongue on their ancient language.
My family’s bad behavior seems rather innocent, though, compared to the recent Karens portrayed on Instagram. Like savages, these females are shot in the “wild” (caught in cars, on door-steps, parking lots), or filmed “going wild,” like throwing shit all over a grocery store. It is entertaining to watch them “getting owned” or “molly-whopped.” They’re very loud, these law-and-order ladies, who seem to be simmering at a constant 8. And if anyone gets out of pocket, they will catch an over-committed, bi-polar Karen’s smoke.
Given all the Dicks and Richards out there, it’s an older woman’s name that’s been made an internet-wide figure of fun. How normal is it to use a female name if you want to create a nagging narrative? The name was chosen by Black kids in the ’90s for its association with whiteness. A few decades later, memes about Karens being an ex-wife who wanted to take the kids in the divorce began circulating online, which is how Kate Gosselin became the poster girl for the name.
Karenovirus and Corona Karens arrived with the pandemic. There’s a group called Karens Against Karens. In fact, now you can be a Karen without being a Karen (whatever that means). I have a friend who has the misfortune of actually being named Karen. She’s pretty good-natured about it. “I ask my husband to call the manager now,” she says.
There is a gaggle of geese, or a murder of crows, and at present, we have a “privilege” of Karens in our lexicon. That’s correct. America’s most (un) popular meme is now a plural passive noun. Other variations include a “batch of bitches,” or a “tattle” or “complaint” of Karens. My favorite is the singular Karen, as in “the Karen out there better watch their back.”
The eye-rolling retort, “OK, Karen” has become so prevalent that almost anyone can be accused of being one.
Like me, for instance. I’m sort of a closeted case. I can act all nice and pretty, but every now and again the dragon shrieks. I mean who in their right mind serves up a $25 plate of large shrimp that HAVEN’T BEEN CLEANED? I’ll confess that I did indeed need to speak with the manager.