End of the line: Rusty: A summer bromance 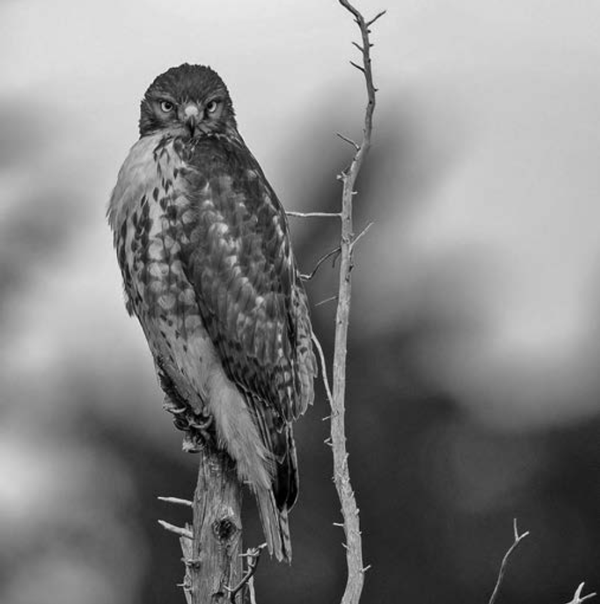 I came into the valley through the trailing breezes of summer. It was to become an incredible day, in another time, and in another world. It was a day of exploration. The grassy fields swayed in an undulating rhythm at my knees, as the light pulsed from the shadows of trailing clouds. I wondered as most boys of 12 would do, exploring the places adults were forbidden to traverse. It was during one of these sojourns that I came upon him. It would be a day branded in memory.

I was hiking alone, along a meadow, when I noticed a commotion in the grasses. To my surprise, below me, in a pitiful state, was a fledgling redtail hawk! His entire body was trembling and his breathing was labored. The poor creature was in an exhaustive state. As I examined him, stepping back, I noticed that somehow, a wire had tangled around his talon. I quickly searched for a stick, hoping I could disentangle the wire. I maneuvered myself closer, carefully moving the stick under the wire. I kept a distance, for his beak was a formidable weapon. After a few tries, I finally managed to release his talon from the restraint. Feeling relief, I motioned him to fly off, but he remained motionless, wings extended, apparently in a state of shock. I decided to move away, letting him find his bearings, relieved that he was finally free.

As I headed down the trail, the strangest thing happened. I heard a fluttering behind me. As I turned around, I was stunned to find that this bird was attempting to alight on my shoulder. In terror, I waved my arms and ran as fast as I could down the hillside. Out of breath, I stopped, only to look up and find him circling high above me.

The next morning, while eating breakfast, I noticed something peculiar. There he was, roosting on a limb of our sugar maple near the outbuilding. He was casually preening his feathers. Grandpa was enjoying his morning coffee as I pointed toward the tree. I told him about yesterday’s encounter. I received a lengthy tutorial of the dangers of toying with raptors. I was then admonished and told to stay clear of that bird or there would be consequences!

Boys will be boys and I didn’t listen. The bird seemed to roost on the same tree each evening. There was something different about this bird. I decided to call him “Rusty.” Chances would be taken, and out of sight of Grandpa, I fashioned a falconry glove out of some scrap saddle leather and work gloves. I headed toward Rusty, hoping to entice him with a piece of raw meat. I motioned him to land on my arm. Nothing happened. I tried the gesture for several days without much success, watching carefully so that the adults wouldn’t notice my game. Finally, after several tries, Rusty finally headed toward me and landed on the sleeve, tempted by my bait. He remained on my arm, so I slowly walked toward the porch, motioning my grandpa toward the screen door. Astonished by the sight, he muttered out an expletive and stared with amazement. I stood there, on the first step, pridefully. I didn’t utter a sound. Rusty looked around for a minute or so andthen flew off. I was grounded by Grandpa and forbidden to go anywhere near that bird. Rusty would occasionally return to the maple, where I would secretly leave him a treat.

Our friendship lasted about a month. Near summer’s end, Rusty flew off and never returned. I guess in our journey through life, and with the kindness we bestow on the living, we can be assured that grace has a deeper meaning. The memory remains, and occasionally while driving, I will notice a hawk in the distant horizon and remember that summer day that I found Rusty in the windy fields of New England.