End of the line: The stranger
True confessions of a coffee shop voyeur 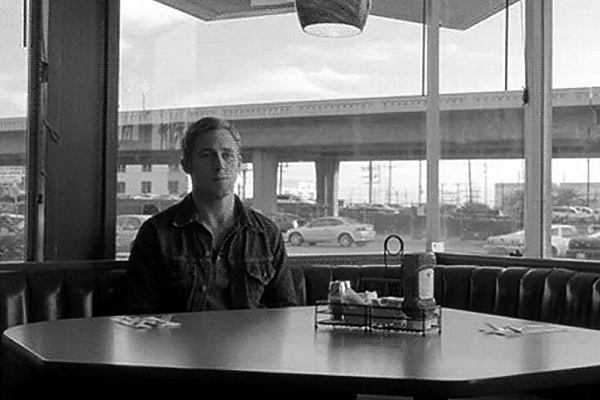 He was wearing a leather kneepad, just one of them, on his left leg. It was tied to his dirty blue jeans with knotted strips of hide that hung down, swaying back and forth pendulously as he walked in.
The coffee shop was packed.
He stood just inside the doorway for a moment, like a cowboy entering a saloon. I put down my phone; I stopped watching my beautiful wife; I sat back in my chair and wished for a bag of popcorn because I knew I was in for some epic people watching.

He walked up to the counter and ordered a cup of black coffee. A simple drink, rugged and masculine. I tried to categorize him because that’s what people-watchers do: his coat was too clean for a homeless man, but his boots and shirt and skin spoke of a life lived out- doors. He wasn’t wearing any jewelry, and he didn’t have a cellphone, but that might’ve been intentional. He paid in cash from his front pocket. No wallet. No identification. How interesting.

He took his coffee from the counter and walked around the room. It was filled with the attractive people who seem to be ubiquitous in this town. Not too young and not too old, dressed well for the winter months and lost in meaningful conversation. He walked unnoticed through their midst. He made a perfunctory stop at the corkboard. There wasn’t anything for him on it, but I think he knew that before walking over. He turned and looked around the room
for a seat. He dismissed the solitary chairs that would’ve made for a quiet morning lost in thought, alone with the fragrant steam rising from his cup. Instead, he spotted an empty chair at a four-top against the window. There were already three people sit- ting there: a man and two women. He walked over anyway.

I tried to get my wife’s attention. I stared at her as hard as I could, trying to tell her telepathically that something weird was about to happen ... she was hypnotized by her phone. I looked around the room, frantically searching for another people-watcher so we could share a “holy crap, are you seeing this?!” look, but I was alone. Either nobody else noticed, or they all had too much social grace to watch it openly. I didn’t suffer any such compunction. I crossed my arms and settled in. This is going to be good, I thought.

Coffee held high in his left hand: it was a statement to all that he belonged. He put his right hand on the empty chairback. “Is anyone sitting here?” he asked. The man in the seated group answered politely: “no.” His answer came with a hand gesture saying “sure, take the chair wherever you need it.” But that wasn’t kneepad’s plan. Instead, he sat down confidently with those three strangers and ignored their incredulous looks. Those looks said “um, excuse me sir, but the three of us know each other, and we were talking about something.” Kneepad looked away – either he dismissed the table’s looks as irrelevant, or he was too oblivious to see them. Either way, I sighed in relief. Since kneepad broke a social convention by intruding on a group of strangers, I was justified in breaking a social convention by staring blatantly with wide-eyed, open-mouthed astonishment. Seriously, who does that?

The two women grew uncomfortable. They shared guarded looks, disguised by sips from their cups, that said “oh ... my ... god.” Kneepad was sitting closely to one of them, looking over and seeking eye contact, making small-talk overtures. Both women stood up and went over to the corkboard. I smiled at the irony: those two women were sure to find something of interest on that board. They were the right demographic.
Kneepad must’ve known that the women left because of him, but he just shrugged it off and looked across the table at his last chance for conversation: the man who let him sit. He was in his late 30s. Intelligent looking, with salt and pepper stubble, he was wearing a puffy coat: colorful and filled with feathers, it looked expensive. He was staring at his phone intently, but not because he was ignoring kneepad: puffy-coat was tending to pressing business.

I looked back over to the two women, drinking their coffee in exile. They’d already dismissed kneepad. He didn’t affect their morning, and their conversation carried on organically. Wow ... These were good, accepting and tolerant people. That’s not me (I’m far too cynical), so I looked back to the table.

Kneepad leaned forward and said “excuse me.” He had something important to say, something intent. Puffy- jacket held up a hand and said “one moment please.” He finished his business on his phone, typing out a quick message or response, and then he put his phone on the table, face down, and said “how can I help you?”

There’s a fine line between people watching and eaves- dropping, and for the sake of journalistic integrity, I’ll admit to crossing that line. Here’s their conversation:

“you and I don’t know each other. We’re strangers. And that’s a rather deep conversation to have with a stranger. OK?” Puffy-jacket was still polite, but firm.

“Hmmm,” Kneepad made a begrudging noise, as if puffy-jacket might have a point.

what he wanted all along – as per his body language. He got up and walked through the room one more time, looking at nothing and everything, and then he left the coffee shop.

I wanted to stand up and clap. It was a bona fide show, the slice of life I just watched, and as I looked around that packed shop, I shook my head in astonishment. That show had a one-man audience! Everyone around me was trapped courteously in their own conversations, their own little worlds, and they’d missed a profound lesson in humanity.

If I’m being honest, I’m not writing about kneepad. That man didn’t teach me anything about myself, and I’d have a ceaseless pool of inspiration if I wrote about all the rudeness I see daily. In truth, these words are about puffy-jacket. It doesn’t matter which metric you use: that man was a good human being, and he was the civil embodiment of everything I love about Durango. He was everything I could not be, in such an awkward moment, and I need to get there if I want to be a true local.

If kneepad would’ve tried to sit at my table, next to my wife, his morning would’ve differed greatly. I would’ve said things that can’t be ignored and everyone would’ve noticed. Kneepad’s exit wouldn’t have been dignified, and later, I would’ve regretted the way I treated another human, regardless of my reason for doing so. I regret it even though it didn’t happen, and I should try to change.

So, how did puffy-jacket come upon his social where-withal? How did he maintain his composure even though his morning was ruined, and how did he keep inside all the things he wanted to say? It was incredible. He used his “pleases” and “thank yous” even though he was dealing with someone who’d broken ties with propriety long ago. Hell, puffy-jacket even nodded affably to kneepad as he was leaving: I would’ve given two middle fingers, even on my best day.

I was staring at the empty four-top, thinking about how lucky I was to live in a town like this, surrounded by people like you, when my wife broke my reverie. I’m sure she noticed the expression on my face – the baffled look of wonderment that comes from good people watching – and she asked what I was thinking about. Her question was dry and sarcastic; she knew it’d be a while before I shut up. I leaned across the table and told it all in the salacious whispers of someone sharing a secret. She smiled at me and shook her head, knowing immediately what would’ve happened if kneepad sat with us. And then we got up and walked out, completely unnoticed by everyone else in the coffee shop.