Luck of the... Italian?
Why I dine on Italian food every St. Patrick's Day 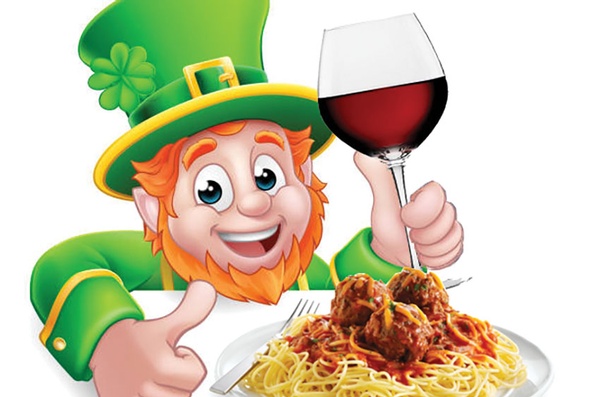 My dad passed away quite suddenly in the fall of 1964, leaving my mom and four children utterly bewildered and uncertain about the future. When my mother told me Dad was dead, in the swirling non-reality of it all, I knew nothing would ever be the same again.

“Think of me as your father,” I heard more than once from a couple of my dad’s old golfing buddies. I couldn’t imagine why I would do that. But of course the thin offers were made in the midst of some misguided drunken allegiance to my father and were as unwelcomed as they were insincere. The golfers disappeared like flowers stolen from a grave. I never saw any of them again.

But there was one man, a childhood friend of my mother’s, whom our family knew as “Uncle Chuck” Sullivan, and he really did show up from time to time just to be with us – no fuss, fanfare or expectations. Uncle Chuck was a funny, dry-witted, clever, sly, irascible, intelligent and twinkling Irishman from Cleveland’s west side; an inveterate bachelor who likely needed a family setting and a good home-cooked meal as much as we needed an adult male perspective.

If Chuck was anything, he was Irish – and proud of it. Although he’d not been born of “The Sod,” he was as Irish an American as anyone could be. One of his rituals (and there were many) was to don his green morning coat and top hat and march down the middle of Euclid Avenue as a celebrated leader of Cleveland’s annual St. Patrick’s Day Parade – a big, long, loud and boisterous parade of bagpipes and marching bands.

In the early spring of 1965, Uncle Chuck promised my brother and me that we would go with him to the St. Patrick’s Day Parade that year, an unlikely promise since my mother would not permit my brother and me to skip classes for a silly parade. (What did she know? She was German). But clever Chuck did sneak us out of high school and took us to The Cleveland Athletic Club where we viewed the parade from the 12th floor of the building. We watched Uncle Chuck march in the parade (at least we thought it was him, but who could tell for sure from 12 stories up) and waited until he retrieved us after the parade.

By then it was late afternoon and getting on toward dinnertime, and Chuck had promised us a meal, too. We doggedly badgered him about going to an Irish Pub, but Chuck Sullivan was nobody’s fool. “My God,” he said, “who in their right mind goes to an Irish pub on St. Patrick’s Day?” quashing our campaign for corned beef and cabbage. “A pub will be crowded, the service will be lousy, the food terrible and,” he added, “some drunk will slop green beer all over the place!”

“But,” he said, “nobody goes to Italian restaurants on St. Patrick’s Day. Trust me.” He gave us a knowing wink and then spirited us away to a quiet, almost invisible neighborhood eatery on a side street called Palmina’s Bar and Grill. Those who knew the place, those who really knew the place, called it “Mrs. D’s.” Uncle Chuck clearly knew Mrs. D, and she knew him. We were escorted to a booth, and the wait staff fawned over Uncle Chuck and his two nephews. The food was superb, the setting so Italian.

Suddenly my mother stormed into the restaurant, furious with Chuck, my brother and me. She knew what Chuck had planned, and after a theatrical display of maternal outrage, settled grudgingly into the booth, unofficially pleased to be a part of the evening.

Mrs. D’s was quiet that night, save for a few regulars who sat at the piano bar. The piano player, whose name I have long since forgotten, knew every favorite song my mom and Uncle Chuck could think of, and with several rounds of martinis and stingers, the evening passed as the maudlin adults sang their life stories. It was back in the days when certain “accommodations” could be made for older teens if you “knew somebody who knew somebody,” and Chuck did know somebody, so my brother and I had our fill of 3.2 beer.

The night was magic. The tradition continued like clockwork every St. Patrick’s Day until I graduated from high school and my family moved to the Southwest. Uncle Chuck came to visit us in New Mexico from time to time, but after a while, age and altitude finally forbade Chuck from coming to visit anymore.

But in a world of few universal truths, one makes sense: who in their right mind would go to an Irish Pub on St. Patrick’s Day and suffer every indignity and humiliation possible, when one could go to a cozy, quiet, convivial Italian restaurant, get fabulous food and caring service from people who are genuinely happy to see you? On St. Patrick’s Day, as I have done for decades, I’ll be having spaghetti, meatballs and a good red wine with which to toast my Uncle Chuck, a guy who never needed to be my dad.