Ode to the glove 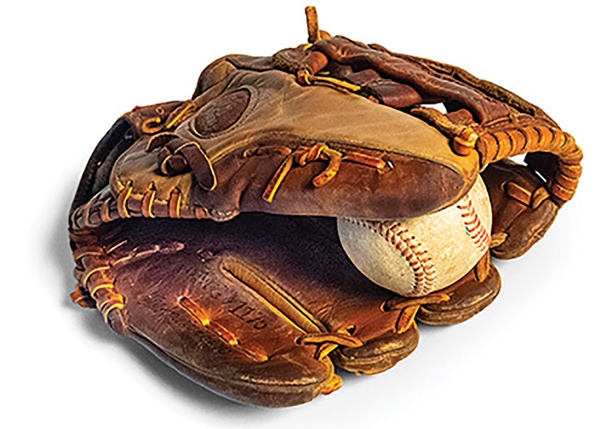 Sometimes it was left hanging on the handlebar of the bike. Sometimes it was left on the workbench in the garage or forgotten on the front lawn.  Sometimes it was thrown on the kitchen counter, much to the annoyance of Mom, but wherever it was left, it was quickly relegated to its proper place, the boy’s closet. For you see, the glove was a vital extension of a young man’s life. After school, it was the first thing retrieved while heading to the sandlot. It was the ultimate companion of the game.

The glove was well maintained. It had its nobility. It was wiped down, oiled, shaped, pounded and then molded with the insertion of a certified major league ball, wrapped tight with a belt and left to sit overnight. The glove was an outfielder’s Rawlings, made of the finest cowhide.

The glove identified you with the neighborhood gang. Whoever you were, the glove was key to where you would play. The glove had kin. Some players wore the first baseman’s glove, modeled to snap and scoop. Others wore the infield variety, compact and light. The catcher needed the circular target with plenty of padding. The pitcher needed a deep pocket to hide the grip. Of course, my favorite was the outfielder’s glove. It was larger than most, with long fingers to snag the liners and a deep pocket to basket the fly.

The glove was given to me on my 11th birthday during the summer of 1961. I never forgot that day, some 49 years ago, and it has remained with me since. From Little League, through Babe Ruth and varsity ball, it has been by my side. I used it for years, playing softball in Durango. I carried it to the outfield and infield, playing for such teams as Elmore’s Store, Oscar’s Diner and the Old Muldoon Tavern. It came with me during my coaching days at Ignacio High School. It had experienced the best and worst of games. It had survived the rainouts, hot sun and muddy slide. It was the recorder of the game’s history with its scratches and stains; its torn lacing and bruised fingers. It was a joyful part of a cherished personal memoir.

With the pandemic shutting down most of our society’s sporting activities, the glove has been relegated, once again, to the closet. And the great game of baseball has been relegated to a memory, for now. I pulled it out of the closet the other day, pounded it to perfection, while recalling the old days. I promised that it would, one day, head out to centerfield with me to make that all important defensive play. Hopefully, we will not have to wait too long.