The Barfly vs. the Cowboy
A single girl's dating duel between head and heart 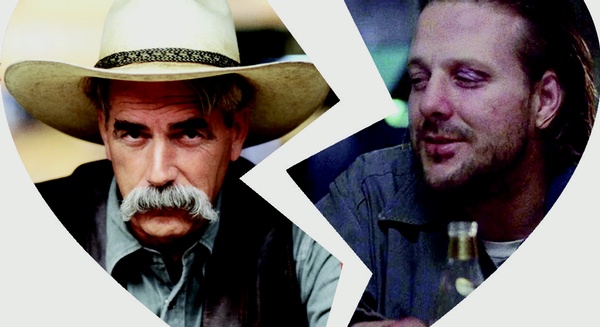 For reasons I can’t entirely explain or justify, I still believe that I can find a long-term, stable partner somewhere in the modernized romance arena. I maintain this belief in spite of digital dating apps, which carousel potential playmates the same way Amazon curates my impulse purchases for home décor and footwear. Such a fantasy comes loaded with additional sub-fantasies – first and foremost among them: that I can find a partner who delights my heart as much as my brain.

I maintain this romantic mythos despite evidence amassed over the past five years of dating. Evidence that seems to suggest that guys who possess the intellectual TNT I enjoy usually gag at the slightest hint of emotional intimacy. Likewise, the dudes with the cuddliest dispositions are totally turned off when I wax rhapsodic about contemporary research on cephalopod neurology.

Take, for example, my romantic interlude with the Barfly and the Cowboy. My acquaintance with the Barfly began with the kind of happenstance that Hollywood rom-coms play off as magical and fated. My entire posse of friends had forced me out for some mandatory dating efforts. According to their courtship expertise, I was never going to meet anyone if I spent every evening at home, pretzeled on the couch, bingeing “The Great British Bake Off.”

At the bar, my friends took turns playing wingman, sidelining single guys to the empty seat beside me. Unfortunately, after two decades spent in two separate but serious relationships, I had forgotten how to flirt and was too nervous to even fake it. As debutants go, I possessed all the social finesse of Eleven from “Stranger Things.”

To repay my friends for their kind but failed attempts to set me up, I ventured to the bar to buy everyone a last round. Soon, the Barfly was posted at my side. As a team, we successfully flagged down the bartender. With cocktails in the works, we chatted. We quipped. He sneakily bought my drink. I protested.

“Cheers,” he said, tipping his whiskey tumbler at me before strolling away.

This scenario repeated itself the next weekend when my posse dragged me out again. A few nights later, my homegirl Kelli witnessed my third exchange with the Barfly.

Back at the table, she declared, “That guy was totally hitting on you!”

The news electrified our whole crew. “Which guy?” “Where?” “A guy was hitting on Jenny?!”

“Jennyyyyy!” Everyone chorused. “He’s into you! You have to go talk to him!”

Suddenly, it hit me: according to all the movies I’d ever seen and all the books I’d ever read, this match had all the potential to be a “true love,” because it had begun with a series of lucky, albeit clumsy, coinky-dinks! So, I sought out the Barfly and we talked. We hooked up. Over the next several days, we talked some more. Every day. Sometimes, for hours. He called all the time. Sometimes, he would just be on the line, working away in silence while I also worked, saying nothing. The rhythmic sound of our mutual breathing filled our earbuds and synchronized our heartbeats.

When we weren’t just breathing, we were usually matching wits. Barfly and I could go round after round, playfully and passionately debating an ethical paradox or philosophical mystery. We dug intellectual trenches and hurled weapons of sass-destruction in a brutal shock and awe campaign. This was our form of whips, handcuffs and naughty nurse uniforms.

After several months, I was cartwheeling inside. Had I actually struck boyfriend gold in my first back-in-the-saddle fling? I hadn’t dated anyone in three years. No hook-ups, nothing. I had needed plenty of time to heal when my fiancé bugged out of our wedding with a lil office romance. In retrospect, I would have preferred he just sent back the RSVP card with the “no, not coming” box checked off.

But who cared!? I had the Barfly. It was magical “true love” in the making.

Or, it was until the Barfly announced: “I don’t want a serious relationship.”

Devastated and confused, I determined that if the Barfly wasn’t going to commit, I sure as heck wasn’t about to sit around pining for him. I tried my first dating app.

A few days and one fortuitous right swipe later, I met the Cowboy. On our first date, we went to dinner and strolled along the river. A regular Iron Man marathon competitor, the Cowboy cut quite the figure in his Wranglers. We paused on a bridge to admire how the streetlamps unspooled copper ribbons of light on the water. At some point, I realized the Cowboy had shifted his focus to me. I dared to meet his gaze. I could feel his eyes tracing my every feature. He said nothing. Like an onlooker taking in a first sighting of Yosemite’s Dawn Wall, Niagara Falls or any natural wonder, the Cowboy swelled his chest with a long inhale. The intensity of his awe flipped my ribcage.

As a second date expanded into third, fourth and fifth dates, I found myself in the crossfire of a high noon, old west love story showdown with the Cowboy and the Barfly. The Cowboy was vulnerable where the Barfly was guarded. The Barfly was fun while the Cowboy was grave. While the Barfly might fling me onto his bed mountained with dirty laundry, random climbing gear and a few plates crusted with old food, the Cowboy always carried me to a pristine bed, setting me on the sheets with the same care and efficacy of a baker transferring a cake to a ceramic display stand. The Barfly dazzled my mind while the Cowboy enveloped my heart.

Brain and Heart leveled their pistols. “You feelin’ lucky, punk?” one gruffed at the other.

An outside observer might be quick to smack me upside the head and say, “Honey! Get a grip! Choose the Cowboy. It’s a no-brainer.”

But the choice wasn’t straightforward. Although the Cowboy proved to be a throwback to more chivalrous days when men reportedly spread their overcoats across puddles to protect a lady’s silk slippers and petticoat hems, I often felt a tad bored spending time with him, because he conceded every debate and rambunctious discussion with kisses and caresses. He had no interest in intellectual war games. Aren’t we modern humans supposed to value rationalism, intellectualism and science over intuition, empathy and spiritualism? Or, at the very least, aren’t we commanded by all modes of media to find a partner who supplies a healthy blend of both worlds, so we can live out our modern American “have it all” lifestyle? If only I could merge the Barfly and the Cowboy into My Perfect Partner.

As summer froze into winter, the decisive shot in my dating duel finally fired. For New Year’s Eve, the Cowboy invited me to spend a quiet night in where we could tangle like warm taffy under blankets with a “Lord of the Rings” marathon playing in the background. Simultaneously, the Barfly had invited me to a party with his gaggle of fun-loving friends. I thought: at last, he’s finally introducing me – and “us” – to his social circles.

Brain pulled the trigger. Heart never had a chance, really.

I gave the Cowboy some lame excuses – oh darn, my girlfriends had already invited me out for the night.

The party was a hot mess. Besides me, the Barfly had invited several other sexual contenders. We’d been lured into a lascivious Thunderdome, expected to compete for him as the prize. I broke it all off with him and left the party early. My New Year’s resolution centered on bolstering my relationship with the Cowboy. Make it real, make it last was my mantra. However, the damage was done. The Cowboy’s regular calls dwindled. When I asked him if anything was the matter, he replied he hadn’t been feeling a solid connection with me all winter. He doubted our long-term potential.

After we hung up, I stood on my porch in the dark. How smart was I to let my brain overrule my heart? If I kept searching, could I find someone to end the head vs. heart duel with a truce instead of a trigger? I cradled my elbows as snow fell in wet, heavy hunks. The icy plapping sounded like horse hooves trotting away to a distant horizon.