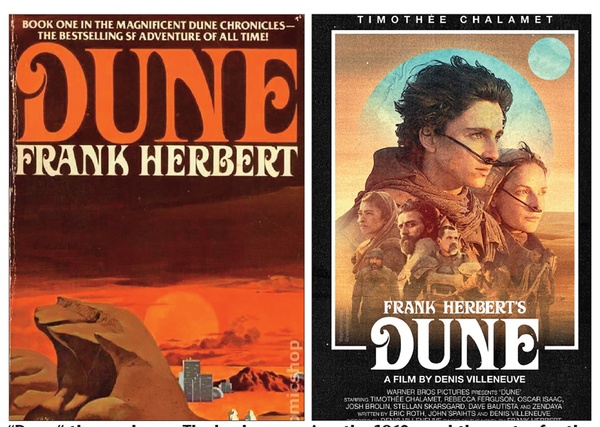 Realpolitik manipulation of world economies? Post-colonial power mongers squeezing Third World groups for valuable resources, with a little apartheid thrown in? Ruthless over exploitation of a planet? A mega drought desiccating everything? Sound like the latest headlines? It’s all in “Dune,” published in 1965.

A young man on a remote desert planet is suddenly thrust into a death match against a brutal empire for the soul of the galactic future. Ring a bell? It’s the plot summary of “Star Wars,” which George Lucas gleefully ripped off from “Dune.”

Vast alliances forming, dissolving and reforming only to betray one another all for a precious resource without which life collapses. Sound familiar? Yep, “Dune” foresaw this, too, over 50 years ago.

“Dune,” by Frank Herbert, is generally acknowledged as the greatest sci-fi novel ever written. A cult favorite in the ‘60s, it has grown into a huge franchise prompting several attempts to capture its essence on film, with limited success. Most notably was the 1984 movie of the same name directed by David Lynch. He was so horrified at the studio’s final cut that he had his name removed from the credits. Though it mystified audiences and was panned by critics (despite including then-superstar Sting), today the movie has assumed its own cult status. Lynch’s “Dune” suffered from trying to squeeze the massive book of the same name into a single movie along with a storyline impossible to follow without knowledge of the book.

Fast forward to 2021. Probably the most anticipated movie in years – and delayed more than a year by COVID – the new “Dune” directed by Denis Villeneuve hits theaters Oct. 22. Villeneuve wisely limited this movie to the first half of the book; a sequel is planned. Villeneuve and screen writers Jon Spaihts and Eric Roth updated Herbert’s work by gender switching pivotal characters and expanding key roles of the Bene Gesserit, a quasi/religious society of mostly women who for millenia have controlled breeding in an attempt to influence the future. They manipulate politics and exhibit spooky mental and physical prowess.

But to first understand “Dune,” one must understand Spice, the most coveted substance in the Empire. In Herbert’s far future, it drives everything. The Bene Gesserit use the drug to enhance their psychic ability. It is essential for Guild Navigators who guide interstellar travel at speeds faster than light. Spice extends life and vitality. And it is highly addictive. Great houses in this feudal empire rise and fall based on control of Spice. In this far-flung future, it is the equivalent of oil. Of water. It is life and power and a constant threat for those who possess it and certain annihilation for those who oppose them. Spice is found on one planet only: Dune.

Herbert famously said that power does not corrupt. It attracts those who are easily corruptible. The author begins “Dune” by showing power wielded by the powerful. He then segues to the oppressed fighting back. The Fremen are the outcast desert dwellers and natives of the planet Dune. Only they understand the source of Spice, thus their exploitation. Their guerilla movement deep in the desert has fought back for generations. When Paul Atreides, the heir of the House Atreides, and his mother, Lady Jessica, a Bene Gesserit, land in their midst after a brutal betrayal, the Fremen sense Paul is more than a young prince on the run. The Fremen have been waiting for a Messiah. Perhaps Paul is that leader. Which peels back another layer of “Dune” – Herbert’s fascination with messianic figures and the potential for their own corruption. Political power, betrayal, environmental exploitation and the savage treatment of a native population; the seductive power and danger of a latter-day Mahdi – such wide-ranging topics would seem enough for any book, even a classic. But Herbert was just getting started.

By 1984, and the release of the original “Dune” movie, Herbert had achieved his own cult status, much to his dismay. “Dune” is partially a cautionary tale against creating savior figures as a solution to our problems. Nevertheless, many nascent environmentalists, green liberals and sci-fi fans held Herbert up as a leader/savant, even a prophet, to his great discomfiture. However, Herbert was concerned about the environment and was instrumental in organizing conferences to discuss ecology, the environment and how to ameliorate our impact upon the planet.

“Dune” is even more relevant today than it was in 1965. Rising oil prices, shrinking water resources, terrorism, climate change, a damaged and reeling planet, greedy power plays by calloused governments to control valuable resources, Herbert foresaw it all. He went on to write five more books in the “Dune” saga. His son Brian Herbert and Kevin J. Anderson have coauthored another 12.

In the mid-1970s, I was a sci-fi fan yearning to be a sci-fi writer. I attended a writer’s conference in Washington State featuring Herbert. He was affable, approachable and funny. Every participant got a one-on-one with him. The encouragement Herbert gave me during our conference has sustained me thru many dark hours of my writing. (FYI: Science fiction writers are some of the most creative people on the planet. Not long after the conference with Herbert, I realized I simply hadn’t the chops to be one.)

Herbert addressed our group of writers several times during our weekend with him. He was from a different time and held different views, some of which would not be P.C. today. (He liked to joke that there is only one plotline in all of Western literature: Boy meets girl. Girl gets into pickle. Boy gets girl out of pickle. Boy tries to get pickle into girl.)

Nevertheless, he was a gentle soul with a generous spirit. Herbert saw the perils we face long before others. And though he would’ve shuddered at the label “prophet,” visionary extraordinaire would be an appropriate mantle for his mind-bending talent. Frank Herbert remains one of the brightest stars in the sci-fi firmament.