Inside the hen house

They celebrated “James Earl Ray Day” at the last place I worked. In case you’re not a history buff, James Earl Ray was the man who shot MLK. At my last job, all those rednecks with their shitty facial hair and cheap tattoos would walk around and wish each other a happy “JER day” every Jan. 15. They’d all laugh at their perceived genius, as if the joke were novel year after year, and they’d comment on the fact that “real men” always work on MLK day, and those other men, the ones with darker skin, didn’t need the holiday because “they don’t have jobs anyway.”

I fed my family with that job, and I did my best to keep inside the outrage that comes from an absence of ignorance. I’d sit at my desk with a painted smile, doing my best not to stab my simian coworkers in their toothless faces. All the other days on the calendar were only slightly better, and after a while, my soul started to sour. The things I wanted to say ate at me from the inside because that’s what happens when you hold in the truth; that’s what happens when you sell your soul.

You see, socially speaking, I’m a liberal. Frankly, given the fact that I have an education and a decent I.Q., I really don’t have much choice in the matter. And for nearly a decade, I pretended like I wasn’t, because if it got out that I voted for Obama (twice!), I would’ve lost my job and the cushy salary that came with it. But recently, despite all my deceit, I lost my job anyway. 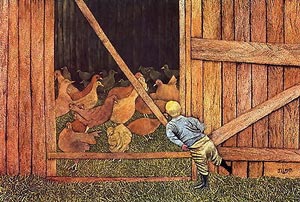 It hurt; I’m not going to lie. Honesty doesn’t pay the bills, and 16 years in the oilfield have painted me into a corner, professionally speaking. I don’t have many options, and the best one (to become a professional writer) brings with it nebulous prospects at best. But I’m chasing it anyway, because I’ve read way too many inspirational quotes not to. And part of becoming a professional writer is earning an apropos degree, so I buckled down and dedicated every iota of my being to finishing my B.A. in writing. And as part of it, I decided to take an internship for three credits wherein I’d work for free at The Durango Telegraph.

I’ve written for this paper occasionally over the years, and I’ve cherished it because it was an outlet. I knew I could say anything in these pages without fear of reprisal because my ex-coworkers didn’t read (they preferred NASCAR and cheese substitutes to the written word). So, when the opportunity popped up, I sent an email asking if I could work for college credit, but I didn’t tell the whole story – I needed the therapy.

You see, I went from one polar opposite to the other; I went from an abhorrent hell full of ignorance and hate into a blissful world filled with intelligent people. Every Wednesday, when I leave the Telegraph’s office, I am thanked for the help, and deep inside where it counts, I laugh like a maniac because I’m the one who owes gratitude. Once a week, I sit like a fly on the wall and revel in the presence of four women who embody what it means to be wonderful, and I love every second of it.

Sure, they look at me like I’m a little daft from time to time, but that’s OK. I’m a 37-year-old man who’s interning for free at a weekly newspaper. And I’m sure I look a bit idiotic sitting there, smiling like a fool when they ask me to stamp envelopes or run out to buy batteries. They just don’t get why I come in or why I enjoy it so much, and someday, I’ll figure out an apt way to say “thank you” besides the bumper sticker I put on the back of my Jeep.

And to pay you back for the fact that you’ve read my pieces, I’m going to let you in on a secret. As my swan song, I’m going to give you a peak behind the curtain and tell you the dirty secrets harbored by the people who make this paper possible.

Let’s start with Lainie. Truth be told, she sits in her office eating bonbons all day. I’ve seen it. She offered to share her bonbons one day, but they were arranged so perfectly on her candy dish that I didn’t dare touch one. And do you know what I really hate about her? She’s wittier than I am. She has ridiculously intelligent eyes that make you back away slowly, because you just know if you say something sarcastic, she’ll match it with a badass rejoinder that’ll make you bow down in defeat. I can’t stand women who’re better armed in the sarcastic arts than I am. Plus, she always gets to proof read the paper before me. I’ve been proud of the fact that I find four typos that she missed. But after seven weeks, I’ve realized I always find exactly four; I think she’s leaving me those four as a test, and by day’s end, if I’ve only found three, I start to sweat.

And then there’s Tracy. It’s ironic because Tracy calls me “sweetheart,” but she’s the office sweetheart. She’s kind and maternal, and she writes with a prolific creativity that puts us “occasional” writers to shame. But here’s the lowdown: Tracy writes in the shower. Seriously! She came into work one day with a handful of wet sticky-notes and I looked at her with a cocked eyebrow and she just looked at me calmly as if to say “yeah, so what?” I’m not sure if Tracy is actually a “Formula One” fan as it’s stated on p. 3, but I know for a fact she’s a fan of “aqua notes.” Secondly, as a writer, Tracy knows the difference between gauntlet, gambit and gamut. I’ve seen her use the latter accurately, and we shared a high-five over it. Do not take this fact lightly – I’m pretty sure it’s why she has the biggest office. Jennaye: OK ... this girl has problems with her zipper. But she doesn’t abandon articles of clothing simply because they no longer zip, and I respect her for that. Actually, I’m not going to write about Jennaye. I’m going to write about all the single, twentysomething men in this mountain town. You guys are stupid. This girl is available and pretty and smart and fun, but you dumbasses just barhop and ride your expensive mountain bikes and complain about being single. You have no valid excuses because she’s rad. OK, maybe you have one excuse. Her name kind of sounds like “hey,” so she ignores the outside world and doesn’t make eye contact with strangers. You’re gonna need to be a bit more aggressive to get her attention.

And that leaves Missy, the reason you’re holding this paper. She is my spirit animal. She doesn’t like compliments, but this woman has defeated misconceptions and hockey teams and well-funded newspaper conglomerates. I know when she reads this she’s going to get that “oh, shut up” look on her face like she doesn’t deserve the praise. There are five or six people who’ve ever paid me for the things I’ve written, and this “editorialista” is one of them. So Missy, thank you. Thank you for taking my writing seriously, thank you for publishing the things I write, and thank you for being an inspiration. I owe you more than you realize. Keep doing what you’re doing, because this town and this world needs it, just like I needed it when I came to The Telegraph.