I graduated from high School in Willingboro, N.J., in 1967. We were known as the John F. Kennedy Gryphons. In the fall of 1966, our football team was competing for the South Jersey Championship against our arch rivals, the Rancocas Valley Red Devils. Both our teams were at a decisive 9-0. It would come down to a league championship game to be played on the Red Devils home field in Mount Holly. Mount Holly was the County Seat for Burlington County. I remember that crisp fall afternoon very well. I had never seen that many people attending a high school football game. The estimated crowd attendance was close to 2,000 people. 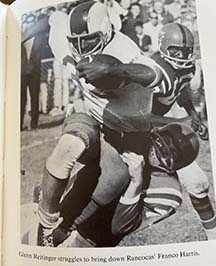 Rancocas Valley showcased its premier full back, Franco Harris. We relied on our own 220-pound fullback, Jeff Williams. Both young men were regarded as the two top players of the league. When the game started, we held our own for much of the first half, but by the second half it was a different story, that was when Franco took over. Our coach, Bill Luttrel, decided to have Jeff play both ways and inserted him as a nose tackle. It was hopeless, Franco ran everyone down. Ultimately, we lost 42-14.

It was custom in those days to invite the opposing team to a Saturday night dance. What I recalled about Franco was that he was friendly, humble and gracious. He didn’t call attention to himself. Both teams enjoyed a night of revelry.

My father and Franco’s dad were friends, as they both were non-commissioned officers stationed at Fort Dix. Franco’s dad, as I recall, was a mess sargeant, and my dad worked in the Central Intelligence Department. After high school, I attended Rutgers University, and Franco was recruited by Penn State University. I remember during my college years visiting my dad at the local VFW and watching Franco play for Penn State. Destiny would call, and Franco went on to become one of the most legendary players to put on a Steeler uniform. He is best known for his miraculous feat, best known in the annals of professional football as the “Immaculate Reception,” which enabled the Steelers to defeat the Oakland Raiders in the AFC Divisional Championship on the last play of the game Dec. 23, 1972. Franco received many accolades for his performance on the field and was admitted to the Pro Football Hall of Fame in 1990. He passed away on Dec. 20, 2022, almost the 50th anniversary of his miraculous play. May he rest in peace. This old rival will miss him greatly.