Some little piggies go to market, others go home, but last Thursday, these little piggies rolled out their yoga mats for some sunsaluting fun. Every Thursday in August, local acupuncturist and yoga teacher Megan Lott, along with coworker and owner of Amazon Acres, Colleen Dunseth, hosts Yoga With Pigs (and a few donkeys) on the verdant fields of Dunseth’s Bondad animal sanctuary. The idea began as just a joke between Lott and Dunseth, but word spread after a monthlong test trial this summer to see what would happen when "oms" and "oinks" mixed. And while it's a little hard to concentrate on Savasana while pigs are oinking in your face, Lott suggests to give in to the urge and go ahead and pet the barnyard animals. Because what's more namaste than downward-facing pig? 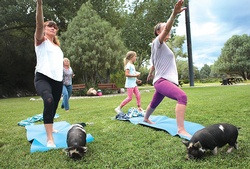 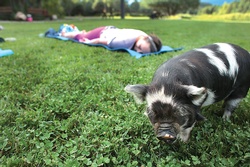 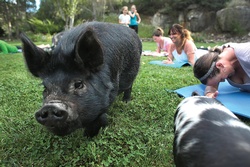 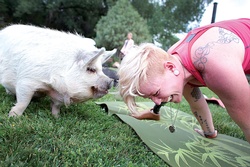 Bee Mathis maintains her pose even though there is a minor distraction. 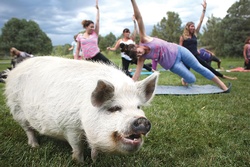 Dinah Shore meandering through the yogis.