Polo is known as the sport of kings, but here in Colorado, it takes on a different meaning. Instead of equine thoroughbred, the preferred steeds are metal and two-wheeled. For the venue, any grassy surface will suffice. And no stuffy gear is required: cut-offs, tennis shoes and a modified old ski pole will do. Of course we’re talking about bike polo, which has gained in popularity in Colorado and across the country in recent years. Last Sat., Oct. 25, seven teams from Colorado descended on Buckley Park for the semiannual Colorado Can Cup, held every six months since 2006. The event was hosted by Durango Polo, which was awarded home field advantage after winning the cup last spring. In this latest round of competition, teams (including four local ones) battled it out from dawn til well after dusk for a chance to be crowned the kings and queens of the pitch. In the end, Purango Dolo reigned supreme, ensuring the cup will stay here, at least until the snow melts and the grass greens up for another season. 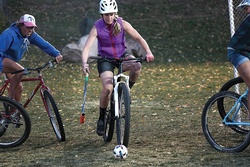 Cara Kropp pushes toward the goal

Watch the shins: two players battle it out head to head 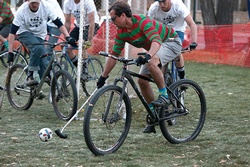 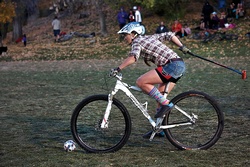 Much like the horse version, bike polo players must be proficient in the one-handed steer. 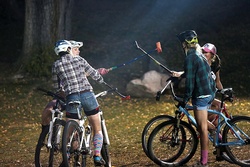 The ladies of Aloha share a mallet high five after a game against Buena Vista. 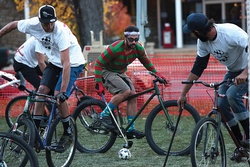